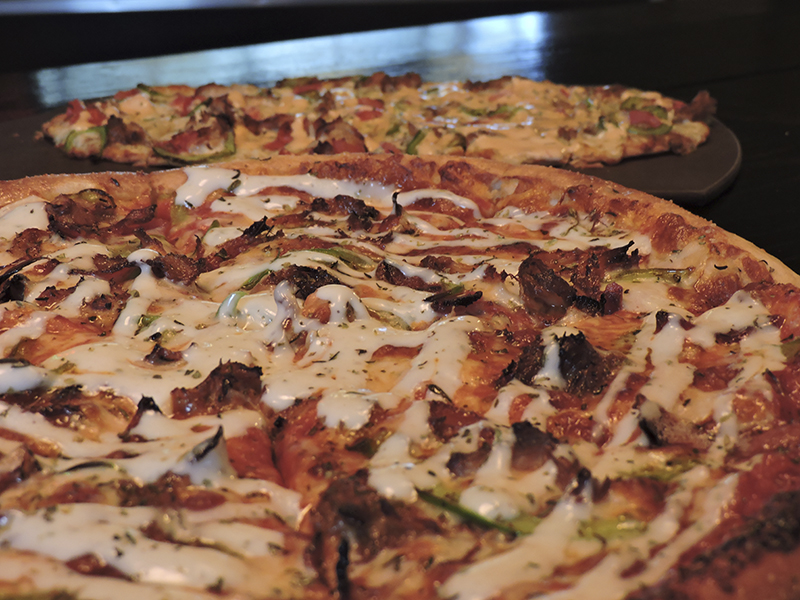 The 12-inch chicken bacon ranch pizza is made with a marinara sauce and drizzled with a special ranch sauce. The flatbread pictured is a chicken focaccia, which has an olive oil base. - Kelly Wassenberg/Albert Lea Tribune

MANCHESTER — After about two years since reopening, The Bend in the Road has been nominated in two categories for 2019 Best of Scene by Southern Minnesota Scene Magazine.

“We were super surprised to be nominated and super blessed at the same time,” Gina Monacy said of the nominations in the best pizza and best small music categories.

The nominations are monumental to Jeff and Gina Monacy, who specifically set out to bring pizza and live music to the bar.

“It’s been a process for us because the Bend had never offered food in the past,” Jeff Monacy said.

As a result, the couple spent months renovating the facility after purchasing it during an auction to add a kitchen and to bring the building back up to code.

“I always said I wouldn’t be serving my community if I didn’t come back and make everyone pizza,” Gina Monacy said. “It was just so fun for me.”

Her husband agreed, noting she would bring up her pizza-making days when they were working in various corporate positions before moving back to the area.

While the bar offers burgers and soups, flatbreads and pizza are customer favorites, the couple said. The homemade flatbreads have been the standout so far, but the 12-inch thick-crust pizza they offer is quickly catching up. Since each pizza is made to order, customers can order off the menu or make their own pizza. 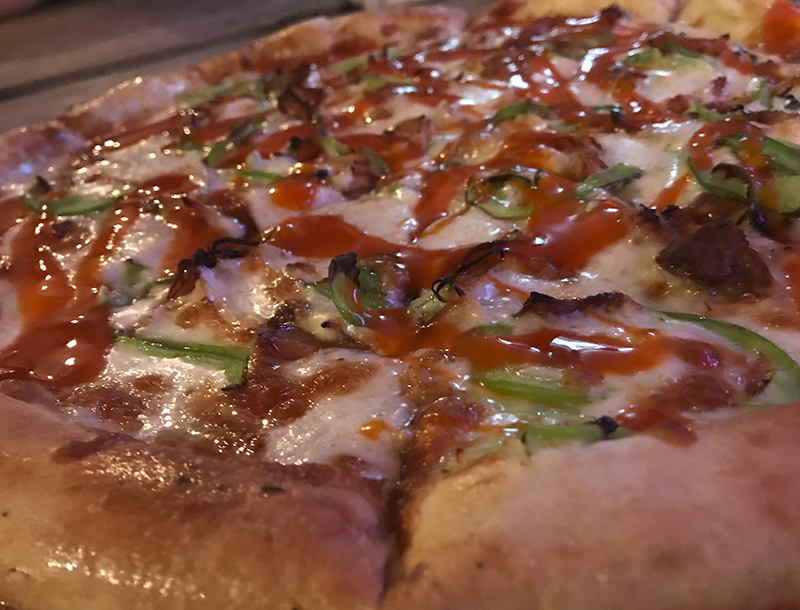 All the pizzas at The Bend in the Road are handmade with fresh ingredients. Pizzas like the buffalo chicken pizza pictured are on the menu. Pizzas are made to order, so customers can pick their own toppings as well. – Kelly Wassenberg/Albert Lea Tribune

Customers have been responding to the menu positively, and the couple noted their food sales have grown exponentially over the last six months to a year, estimating somewhere between 30 to 50%.

In addition to the flatbreads and 12-inch pizzas, the bar also offers a cauliflower crust that is keto-friendly and a gluten-free crust, as well.

“A lot of love goes into the food we put out here,” Gina Monacy said. “I’m a perfectionist. It’s my own demise.”

In the category of best pizza, The Bend in the Road is one of eight competing for the award, and many of those competitors specialize in pizza. Others listed in the category include Basileo’s Pizza Restaurant in Faribault, Basil’s Pizza Palace of Northfield, Nick’s Pizza Palace in Owatonna and Pagliai’s Pizza in Mankato, among others.

When it comes to the music scene, the Monacys are just as dedicated to bringing in quality music acts.

“It’s really about just taking the time to put yourself out there and build a network,” Gina Monacy said.

Live entertainment at The Bend has included country artist Jake McVey, rock band Saving Abel and Old Salt Union, who reached the No. 1 spot in bluegrass on the Billboard charts Aug. 16 — a week before playing The Bend.

The most popular genres among customers seem to be bluegrass, progressive, Americana and folk music, Gina Monacy said.

The best has not yet come for the Bend, though.

“We’re not complacent,” Jeff Monacy said. “We’re going to continue to improve and make this a great place to be.”

The Bend in the Road is one of seven music venues vying for the title of best small music venue. Other venues competing for the title include The Grand Kabaret in New Ulm, Staghead Gastropub in Red Wing, Ed’s No Name Bar in Winona and Corks and Pints in Faribault, among others.

Voting is still open at Southern Minnesota Scene and will close Sept. 2.