Too many candidates: Some Iowans tired of massive 2020 field 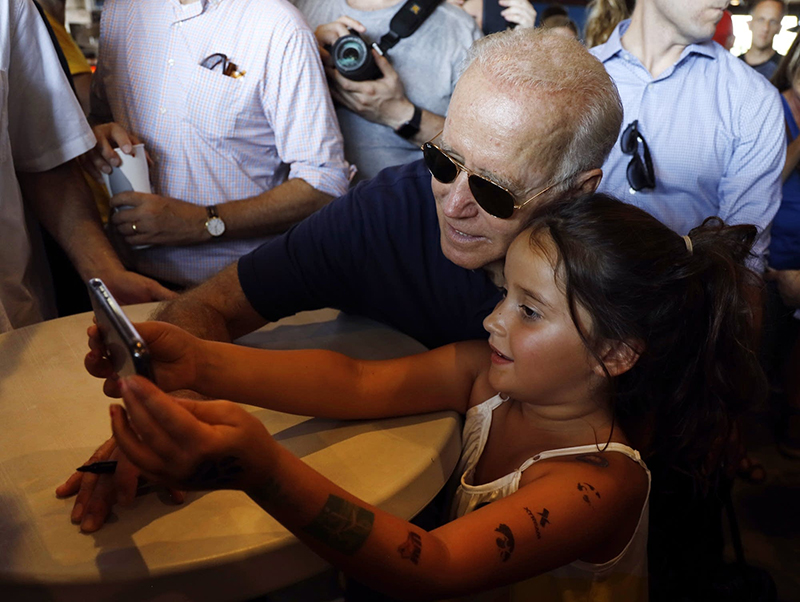 Democratic presidential candidate former Vice President Joe Biden poses for a photo during a visit to the Iowa State Fair on Thursday in Des Moines. - Charlie Neibergall/AP via MPR News

By The Associated Press and Minnesota Public Radio News

Jake Poorman is exhausted. He’s been trying to get every Democratic presidential candidate to sign a baseball, a souvenir of the wildest Democratic primary he has seen in his 60 years as an Iowan. He has gathered so many signatures — 16 — he had to get another ball.

That, coupled with the constant controversies out of Washington, has him a bit burnt out on politics.

“It’s a lot of work,” he bemoaned. “There’s starting to be a bit of fatigue.”

Iowans treasure the national attention that shines on them every four years when presidential candidates descend on the state, whose caucuses mark the beginning of an election year. But as virtually every Democratic contender swings through Iowa this weekend to participate in the famed state fair, even some die-hard Democratic activists are getting restless.

The concern isn’t limited to Iowa. Recent interviews with dozens of Democrats in other early-voting states registered a fresh anxiety among the most diligent deciders: If Democrats don’t start to figure things out soon, they could give President Donald Trump the upper hand.

“I think that watching the infighting could have Trump win again,” said Duane Campbell, a 29-year-old custodian in Las Vegas. “That’s what he wants. He wants us to infight.”

Beth Doney, a 62-year-old retired librarian in Las Vegas, said she too is worried the hits Democrats are taking at each other could leave the president better-positioned to win re-election.

“I’m just concerned that among Democrats, we’re not yet able to rally around a smaller group of people and really focus on beating Trump, which I think is the number one issue of the election,” Doney said.

A crowded primary field can be a good omen for a party, forcing candidates to endure bloody fights that can prepare them for the general election. In 2016, 17 Republicans battled for the Republican nomination before Trump took on Hillary Clinton, who faced just one serious Democratic challenger.

National polls suggest Democrats are enthusiastic about the array of candidates. But there are plenty of jitters, too.

And the interviews capture the pit-of-stomach-worry for a party that is desperate to oust Trump: With so much at stake, is it possible to have too much of a good thing? Might this epic primary be a distraction from the main event?

“I feel like the longer we’re watering things down, the less time we have to kind of get everything together and fight the bigger fight that we have against Trump,” she said.

In New Hampshire, 77-year-old Claire Karibian worried that it would be tough to pick the best candidate given so many choices.

Stiffer requirements to qualify for the September debate could force some candidates out of the race in the coming weeks.

But those most at risk of being cut aren’t rushing for the exits. Former Colorado Gov. John Hickenlooper and Montana Gov. Steve Bullock are so far resisting entreaties to abandon their low-polling White House bids to instead run for the Senate.

“For most Americans, the first time they thought about the Democratic primary was when we had a debate last month,” former Maryland Rep. John Delaney, who is also polling near the bottom of the field, told reporters recently.

Lindsey Ellickson, a Democratic activist in Cedar Rapids, Iowa, said she is worried that all of the focus on the presidential candidates diverts attention from critical down-ballot races. She said Democrats also need to focus on city council and statehouse seats, as well as the campaign to defeat Republican Sen. Joni Ernst.

“Having most of the campaign staff hired by 25 different candidates, and most of the attention going toward door-knocking for presidential candidates is not helpful at this time,” Ellickson said.

Montgomery County, Iowa Democratic Party Chair Joey Norris said with at least 15 campaigns deploying staff to his rural county, “we’re seeing that each campaign is tripping over each other in our small counties and our small towns.”

He said voters being repeatedly called by campaigns might avoid their phones soon.

“I definitely think there is a little bit of a burnout from getting texts from people that are involved with the campaigns” inviting him to events, he said. “Right now, I’m just ignoring them.”

His friend, Leigh Nida, a doctoral student in educational policy, was equally frustrated.

“It’s interesting that you’re getting texts about events — I’m just getting asked for money,” she said. “I’m a graduate student. I don’t have any money!”