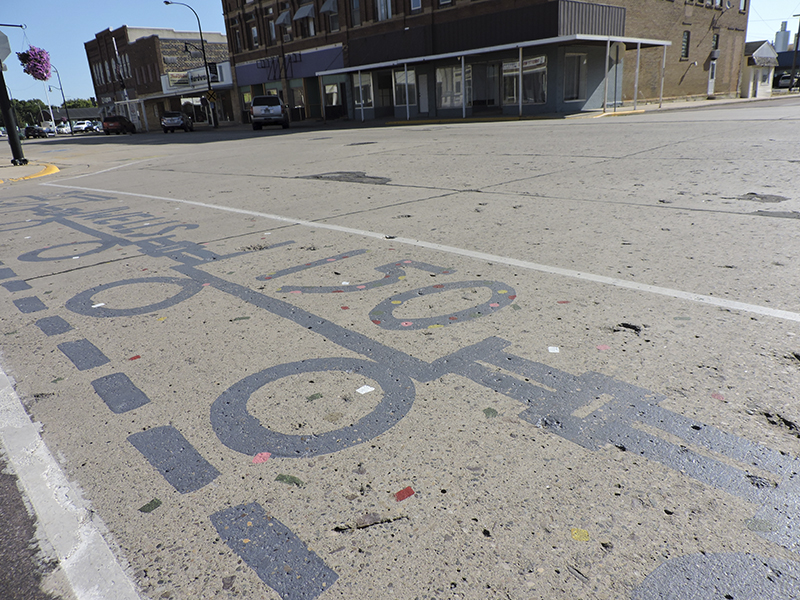 Volunteers on the Creative Wells committee used temporary paint to draw a train which reads “Wells 150 years” across one of the main crosswalks at First Street Broadway. Corn cob people were also painted at each side of the crosswalks at the intersection. - Kelly Wassenberg/Albert Lea Tribune

WELLS — Turning 150 years old is no small feat, and the community of Wells plans to continue its yearlong celebration with a 10-day military exhibit, which will start Friday and continue through Kernel Days weekend.

The military exhibit will begin at 11 a.m. Friday in the gymnasium at St. Casimir’s School. Special events planned for the evening include a free meal from 4 to 6 p.m. for all with military ID or in uniform and a band concert by 34th Infantry Patriotic Band at 7 p.m. in the auditorium at United South Central.

According to a press release, the exhibit itself will include a Civil War display, traveling trunks provided by the Minnesota Military Museum and World War II posters from the Smithsonian. Information from military organizations will also be on display.

The exhibits will be open from 3 to 7 p.m. Monday through Thursday and 11 a.m. to 7 p.m. Friday through Sunday during the 10-day event. From Tuesday to Thursday the Spirit of Minnesota Tribute Bell exhibit will be brought to the school, as well.

The exhibit will close Aug. 18 as area veterans groups, firefighters and law enforcement will escort the Bell of Honor into Wells to the Area Veterans Memorial. There will be a special ceremony at the memorial beginning at 1 p.m. Bryce Stenzel, an Abraham Lincoln impersonator, will recite the Gettysburg address, and Lt. Col. Paul Baker, chaplin, will give the invocation.

Unlike last year, the Maple Valley Classics Car Club will host its annual car show a week prior to the Kernel Days festivities. From 8 a.m. to 3 p.m. Saturday, classic cars will line Broadway. Registration is from 8 a.m. to noon and the trophy presentations will be done at 2:30 p.m. As usual, a small cruise of the surrounding communities will follow immediately after the show. The Wells 150th Committee will host a 1950s and 1960s street dance featuring DJ Dale Siegfreid “The Vinyl King” starting at 6 p.m. that evening.

Kernel Days events will officially begin with a free movie sponsored by Flame Theatre at 7 p.m. Wednesday. The Library Foundation’s annual salad luncheon will be from 11 a.m. to 12:30 p.m. Thursday at the American Legion and the Little Miss Kernel program will be at 7 p.m. in the auditorium at United South Central.

CCF Bank will host a free lunch from 11 a.m. to 1 p.m. Aug. 16 in its parking lot. Bevcomm is providing root beer floats at the event as well.

A host of activities will open at Half Moon Park, including giant inflatables for all ages, a petting zoo, KidZone activities tent, a human foosball tournament, Lions Club bingo, food stands and a  beer garden. There will also be teen activities at the soccer field at 6 p.m. and a teen dance at the Bevcomm Stage at 7:30 p.m. A fireworks display will begin at 9:30 p.m.

Half Moon Park activities for children Aug. 17 include a children’s pedal tractor pull at 10 a.m., free inflatables from 10 a.m. to 8 p.m., a Reptile Zoo demonstration at 11 a.m. and Coins in the Corn at 2 p.m.

The park will also have live entertainment, including Cale the Juggler and Dangerous Stunts at 2:30 p.m., and Brett Feist, who will take the Bevcomm Stage at 7 p.m.

New this year, the Wells Kernel Days Committee will sponsor a shuttle bus service to pick people up at the Jaycees street dance Aug. 17 and give them a safe and sober ride home. The street dance will feature the EXPRESS Band and begin at 9 p.m. The shuttle service is only available to those who live within five miles of the Wells city limits.

The military exhibit activities continue with the flea market from 10 a.m. to 7 p.m. behind St. Casimir’s School on Aug. 17, and from 11 a.m. to 3 p.m. the New Ulm Civil War Battery will make an appearance at the school.

Pete Gordon will give a speech about John Wesley Donaldson, “the greatest African-American pitcher you’ve never heard of,” at 2 p.m. at St. Casimir’s, as well.

Kernel Days activities will wrap up Aug. 18 with a Veterans of Foreign Wars pancake breakfast from 7:30 a.m. to noon, a Lions Golf tournament starting at 9:30 a.m. and a firefighter’s tournament at 11 a.m.

The 10-day military exhibit will also close with a Bell of Honor Ceremony at the Wells Veterans Memorial. According to event organizer Lyle Doerr, the Bell of Honor will be brought to the memorial by American Legion Riders and police, fire and EMS staff. The bell will be rung seven times to honor those who have given their lives in the line of service — including military members, police officers, firefighters and emergency medical services personnel.

At 12:45 p.m. the  Lincoln impersonator will recite the Gettysburg Address, which will be followed by the invocation. Jenna Schmidtke of Faribault County Veterans Administrative Services will be the guest speaker.

1-4 p.m.: Rock climbing wall with the Albert Lea National Guard for those 12 and older

6 p.m.: Teen activities by We Are United, soccer field

After parade: Meet and greet with Cinderella, Half Moon Park