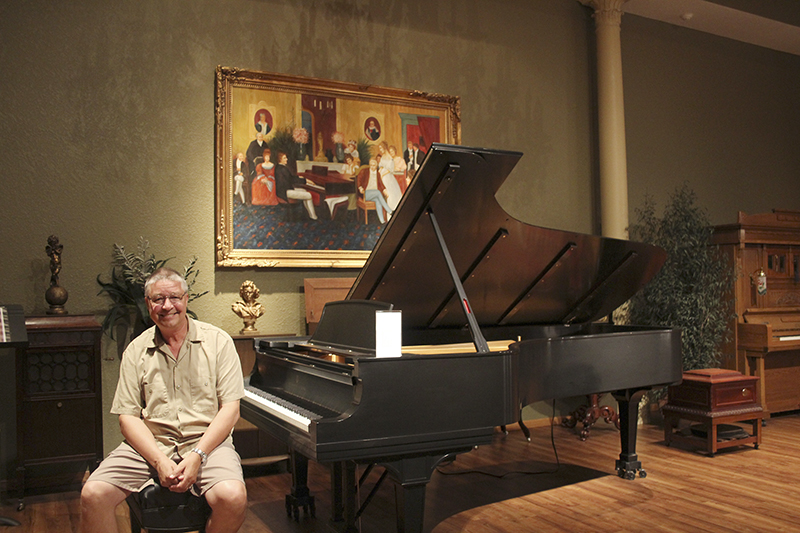 Lukes poses with his 1929 Steinway concert grand pinao, which was fitted with a modern player system. Sarah Kocher/Albert Lea Tribune

GLENVILLE — On the outside, the outbuilding on the Lukes’ property looks like a place one might store machinery. The first thing that makes it look otherwise is the chandelier.

That, and the period carpeting, gold ceiling, wood bar and perimeter of 1900s self-playing musical instruments.

He has built his own little world, Kiven Lukes said.

He uses his music hall for occasional fundraisers, including the one it will host for The Albert Lea Art Center’s capital campaign from 6:30 to 8:30 p.m. Friday. Tickets are $40. 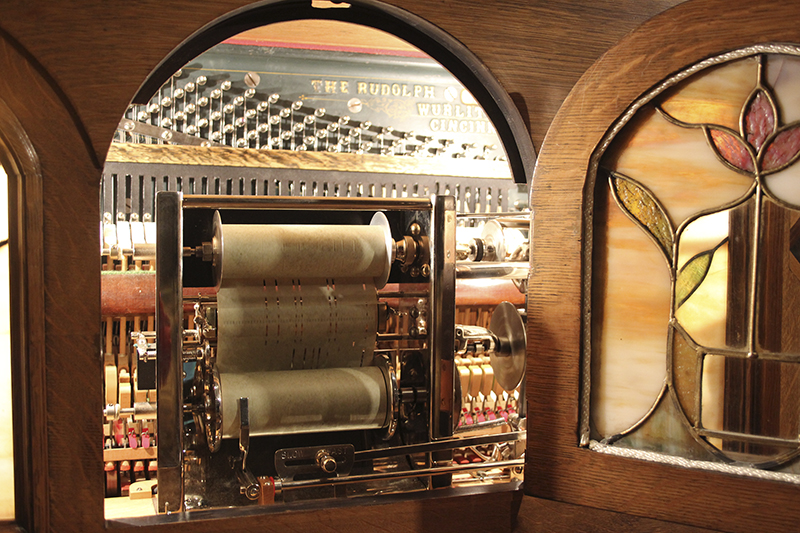 Kiven Lukes’ 1913 Wurlitzer piano trills happily as it plays. Opening the window, one can see the hammers and mandolin rail, a fabric comb with metal studs on the end, operating as the machine plays through its music roll, pictured in front. Sarah Kocher/Albert Lea Tribune

The evening will also feature artwork by Marty Shepard, who focuses on women in her subject matter. Additionally, Lukes’ son, John, will play the marimba and Lukes will give an overview of what the world of music was like at the turn of the 20th century. Additionally, Kiven Lukes will showcase and explain the instruments in his collection, he said.

The first piece in his collection — which has since grown to roughly 15 instruments in his music hall alone (excluding the pieces he keeps in his home) — was a music box that, when he first purchased it, did not resemble a music box at all. He instructed his wife to buy the busted-up wood and metal contraption at an estate auction after discovering it made music. He put it together as best as he could, Lukes said.

“I like the mechanical aspect of it,” Lukes, a farmer, said.

His interest expanded from there to pneumatic, or air-operated, instruments. His 1925 Steinway reproducing grand piano is one example: it uses a roll of paper with a series of punched holes as its sheet music, and when the air moves through the holes, the piano knows what to play. In contrast to a player piano — though Lukes has one of those, too — the reproducing grand piano can also capture dynamics.

“There’s no life to the music,” Lukes said of a player piano. Not so with the reproducing piano.

He doesn’t play any of the instruments himself.

“I can’t find middle C,” he said. Without the mechanics of them, he wouldn’t be able to play one of his nine pianos.

But his interest in music started at an early age; both his parents sang, and he remembers riding across the field on his dad’s lap as he sang “Don’t Sit Under the Apple Tree.”

His collection also includes orchestrions — pianos that also attempt to mimic other instruments like clarinets and violins — and a brightly-painted fairground organ, Marianne, loud enough that he prefers to have it play outside in good weather.

He is still adding instruments to his collection, though at a reduced pace. 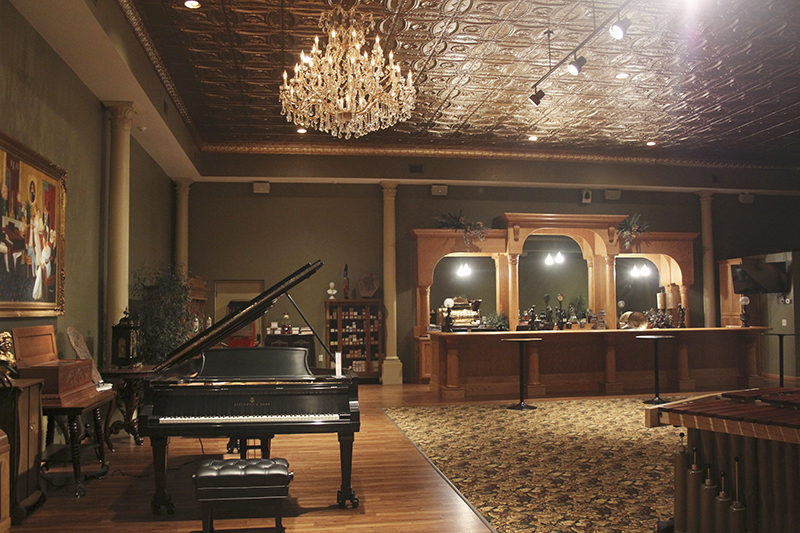 Kiven Lukes built his music hall about seven years ago after he accumulated too many instruments to fit in his home outside of Glenville. It is the site of the Albert Lea Art Center’s capital campaign fundraiser Friday. Sarah Kocher/Albert Lea Tribune

Some collectors look for the musicality of an instrument, while others look for mechanical novelty, Lukes said. He falls in the former category.

This is why he leans toward pianos.

“I’m not really into the organs, and those people are really nuts,” Lukes said.

He has all his pieces restored so those listening have the same experience as if they were listening to the instrument when it was built.

“I want them to play just like they did when they were new,” Lukes said. “… It kind of takes you back in time.”

Through the light-up stained glass of his Seeburg KT, black castanets chatter and wooden mallets strike wooden blocks. The tambourine shakes, rattled by an invisible hand.

Lukes hums along. Of the hundreds of paper rolls he has for his instruments, there aren’t many he hasn’t heard. Between the instruments in his home and the ones in his music hall, he turns on this or the other instrument about five times a week, he said.

But it’s better when he can share it. That’s really why he built the hall, he said.

“It’s fun to come in here and sit a chair in the middle and listen, but it’s way more fun to play them for other people that haven’t heard them before and show them that music is a constantly evolving thing, and this is what it was like about 100 years ago.”