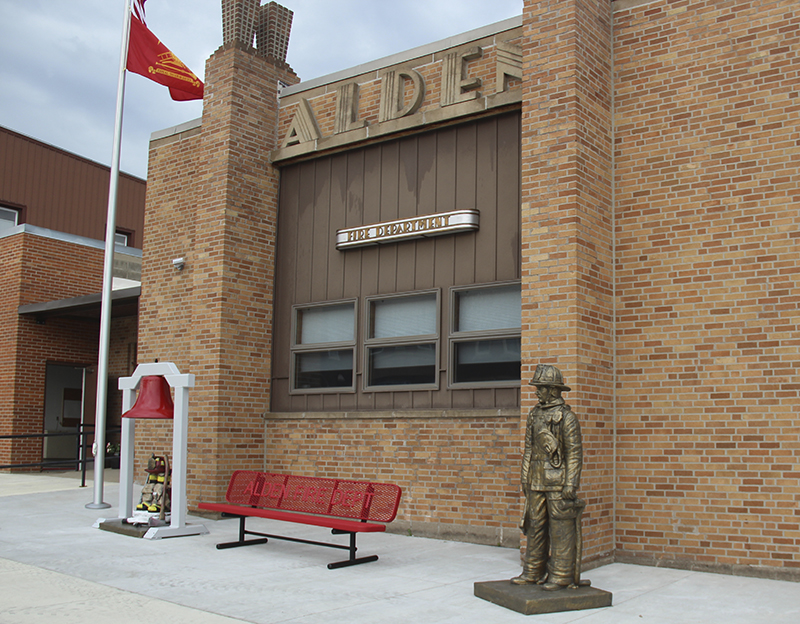 The Alden Fire Department has a few new additions to the front of its buildings thanks to several community members. Items include a refurbished fire department sign, two statues, a personalized bench with a matching trash can and the original fire station bell. - Kelly Wassenberg/Albert Lea Tribune

ALDEN — A drive through the community of Alden on Minnesota Highway 109 has always included a view of Morin Lake, which is nestled in the center of town. The route now includes a tribute to local firefighters that cannot be credited to one man — but to many.

The project started with an idea from Scott Hemminsen, who is a businessman in Alden and a fourth-generation firefighter in the community.

During a work trip he drove by SVJ Creative Designs in Kellogg and saw a firefighter statue. The sight sparked an idea in him that grew and spread to others. He and his wife, Tanya, decided to purchase a firefighter’s statue along with a smaller statue of a firefighter’s boots ready to be stepped into, with his uniform scrunched down around them, so it can be efficiently pulled up the moment a fire call comes in.

Martin Bernau of Alden was also recruited for the project. He made a stand for Alden’s first fire bell, which had been sitting in cold storage for a number of years. The stand and bell now hang over the smaller statue of the firefighter’s boots.

Miles Kleinschrodt, who served the Alden Fire Department for 18 years, also stepped forward to add to the scope of the project.

“I knew that the Hemmingsens were going to be doing the display and one of the guy’s at our firemen’s meeting said we should do something with the sign,” Kleinschrodt said of a fire department sign that had hung inside the fire hall for years. 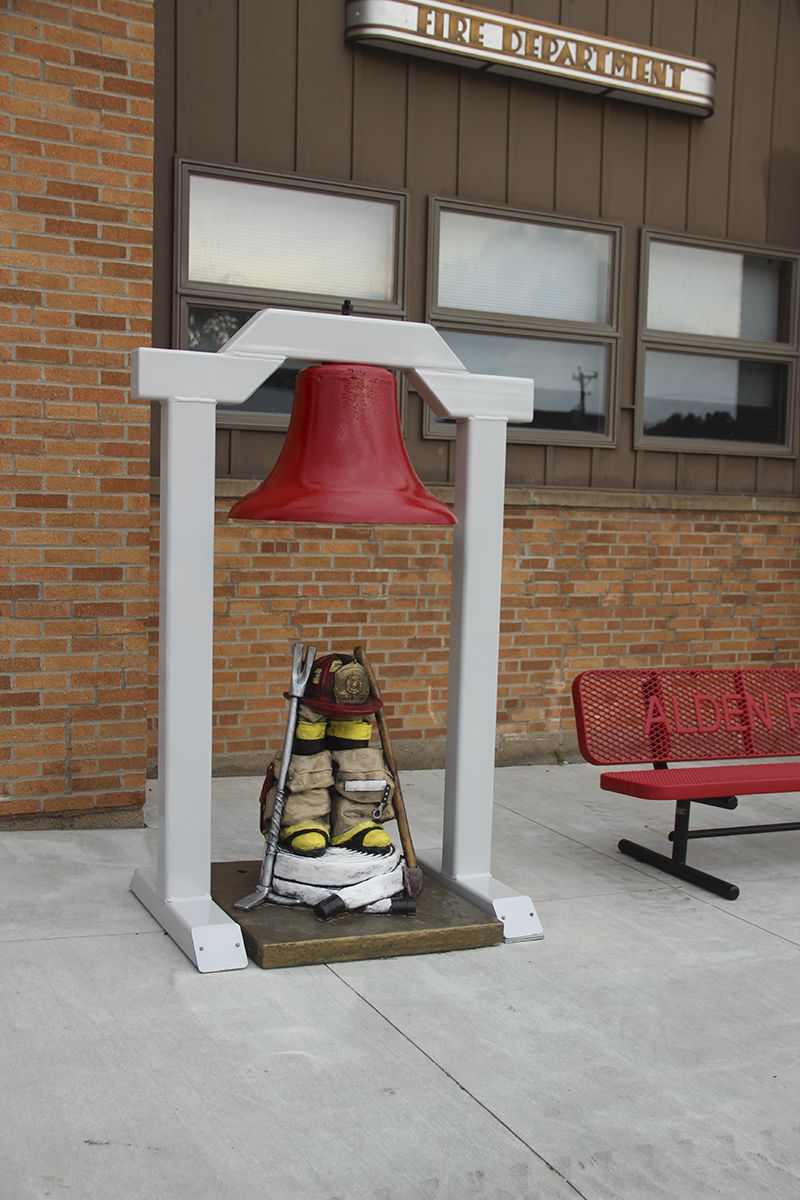 The original fire bell for the Alden Fire Department now hangs above a statue of a firefighter’s uniform scrunched up down by their boots. A firefighter’s hat is perched on top with a fire hose rolled up underneath. A firefighter’s crowbar and axe are leaned up against the uniform as well. – Kelly Wassenberg/Albert Lea Tribune

“That’s when I had the idea of taking it to Albert Lea Electric and refurbishing it,” he said.

Both Kleinschrodt and Albert Lea Electric absorbed the cost of the unit to be repaired, while Kleinschrodt donated his labor. He cleaned and repaired the unit himself, but his coworkers helped out by giving him recommendations on what type of LED light would look best in the unit.

According to Hemmingsen, the unit had once hung outside on  a single-stall garage door on the outside of the building. The unit, which Kleinschrodt said probably dates back to the ’50s, was restored to working order and then mounted on the front of the building by another volunteer, Heath Reindal, who owns Reindal Electric in Alden.

While Reindal has never served his community as a fireman, he felt compelled to donate his time to the project.

“It just felt like it was the right thing to do,” Reindal said.

Along with mounting the light and running electricity to the unit, he also installed lighting to a new flag pole at the fire station. The addition of the pole was a collaborative effort — Albert Lea Electric used an auger to create the hole for the pole, the local Sons of the American Legion group took care of the base and the Hemmingsens paid for the pole itself.

A red bench personalized with the words “Alden Fire Dept.” and trash can was purchased by the Hemmingsens from Premier Polysteel out of Northwood and both sit out in front of the fire station. A 4-by-4-foot picnic table has also been bought by the couple, but Hemmingsen said the unit may not make its appearance outside the fire station until spring.

For Hemmingsen, the tribute only seemed fitting.

It’s also a way for the Hemmingsens to give back to a supportive community.

“We do have a long standing relationship with the town,” he said. “If the town didn’t support us, businesswise, we wouldn’t have a business anymore either.” 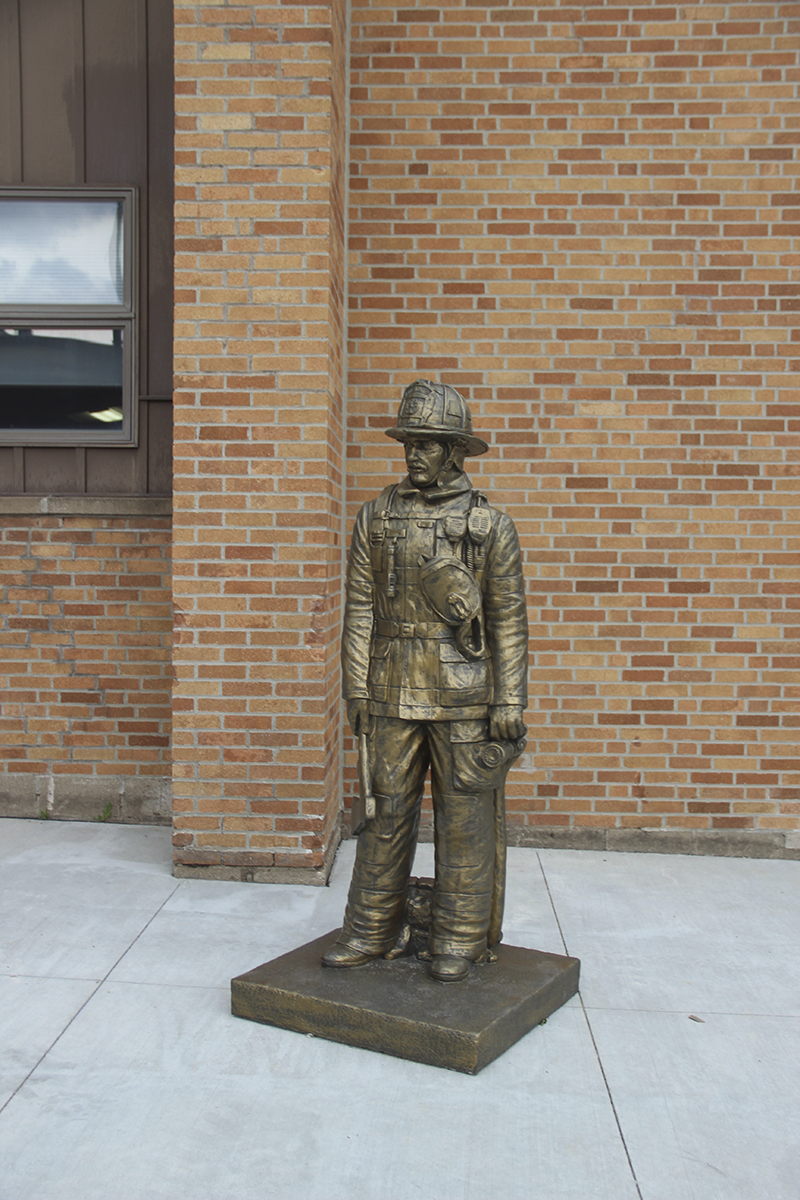 A statue of a firefighter was donated to the Alden Fire Department by Scott and Tanya Hemmingsen. Scott Hemmingsen is a fourth-generation firefighter. The couple’s son, Parker, has carried on the tradition. – Kelly Wassenberg/Albert Lea Tribune