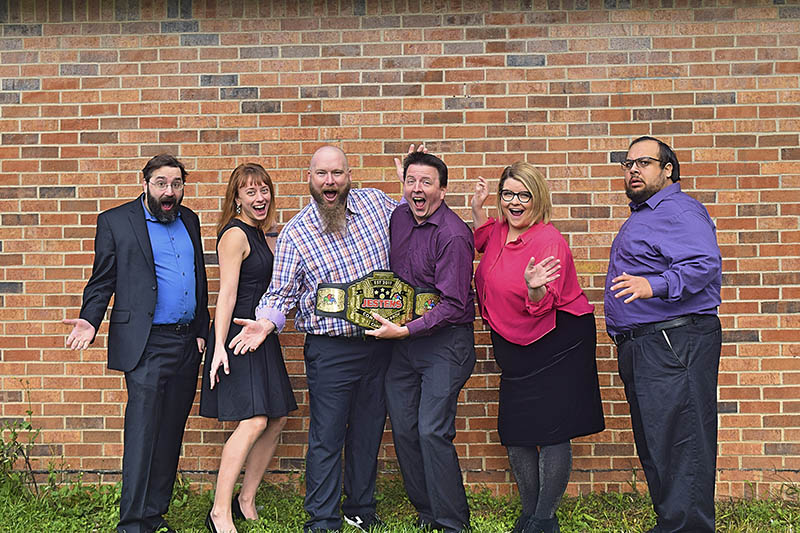 Six Jesters Comedy Improv troupe members will perform at 7 p.m. Sept. 21 at Alden-Conger High School. The show will ask audience members to participate by volunteering or sharing suggestions for the show's directions. Provided

A grab bag of comedians will take the stage next weekend, hoping to make Alden residents the star of a show where everything is made up.

Six of the approximately 20-member Twin Cities-based Jesters Comedy Improv will perform at 7 p.m. Sept. 21 at Alden-Conger High School as a fundraiser for the Alden Area Lions. Neil Pierce, a member of the Lions, suggested the group for a fall show. His son, Bryan Pierce, has been in the group for about seven years.

Though Bryan Pierce lives in Minneapolis now, he grew up in Alden and attended Alden-Conger High School.

Pierce did the fall and spring plays for several years in high school.

“I realize now that there were a lot of improv games that we were playing” as warm-ups for rehearsals, he said.

“You’re entertaining kids and you’re doing little skits for them,” he said.

He has done improv for about nine years, starting with classes and moving into the Jesters group.

Pierce has not come back to perform in Alden since leaving and said he is — mostly — excited to do so.

“It’s also frightening to go back to your high school,” he joked.

But he encouraged audience members to leave the nerves at home, too. Sometimes people who attend an improv show are worried the audience will be made fun of, Pierce said.

“That’s certainly not what we do at all,” he said.

Audience interaction ranges, fellow group member Adam Woolhouse said. He could walk up to someone and ask for the worst anniversary present they ever received, or a volunteer could be asked to join the performers on stage — if they want to.

“The only ones who should be embarrassed are us, because we’re getting paid for it,” Woolhouse said.

Both Woolhouse and Pierce said the goal is to make the audience participants the star of the show. After the show is over, Woolhouse said, it’s not the Jesters they’ll remember.

“But they’ll remember that their dad or daughter or son went up there and looked hilarious,” Woolhouse said.

Jesters Comedy Improv has been around since 2011, Woolhouse said, out of a group of talented comedians looking for a place to perform. After performing in a bar/restaurant and a mini-golf and entertainment complex, both in St. Paul, they have since settled into a monthly performance at a brewery in Spring Lake Park. In between, they do private shows for birthdays, fundraisers, weddings, schools and more.

The group tries to keep the comedy out of the gutter.

“Our humor honestly comes from the audience,” Woolhouse said. “Improv is all based on the audience suggestions, audience participation, audience volunteers.”

The 90-minute show will feature short-form improv, which means lots of games and lots of audience suggestions. In this way, Pierce said, the show moves fast. Think “Whose Line is it Anyway?,” Pierce and Woolhouse said, except it’s in person.

Oh, and with a championship belt.

“We are the only improv troupe that I’m aware of that crowns a comedy improv champion every show,” Woolhouse said. “… The competition can get a little extreme.”

The portion of the show, toward the end, is based on the CBS television show “Survivor,” where the audience votes for their favorite jesters to continue battling each other until one is crowned — or, rather, belted.

“The thing about improv that I love is the show that we’re doing is a show just for that audience,” Pierce said; it has not been done that way before, and it will not be done again.

Money raised goes to the Alden Area Lions to fund their work around the community in Alden.

How much: $10, available through Alden Area Lions members, Alden-Conger drama and music members or at the door