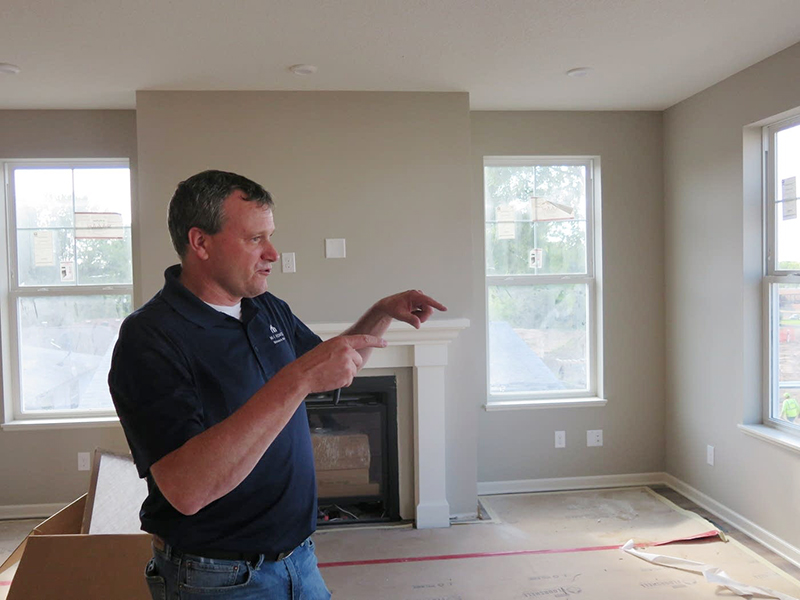 John Rask, vice president of land at M/I Home Builders, points to work being done on a home-building project. He said state and local policies, regulations and fees add a lot of unnecessary costs to building a home in Minnesota. - Martin Moylan/MPR News

There are myriad expenses that go into the cost of a new home or apartment: lumber, plumbing, concrete, roofing, land, labor. There’s not much anyone can do about prices for those supplies. But amid an ongoing shortage of affordable housing, there’s one outlay many builders argue could come down. That’s the cost of red tape.

Many builders complain that state and local government requirements can add tens of thousands of dollars of unnecessary cost to a new home in Minnesota.

A three-bedroom house costs $60,000 more to build in Lake Elmo than across the border in Hudson, Wisconsin, said John Rask, an executive with M/I Home Builders, which builds hundreds of homes a year in several Midwest states. Rask said Minnesota’s bureaucracy accounts for a huge part of the 15 percent added to the sale price.

Rask said land is cheaper in Wisconsin, but that state’s energy codes are more reasonable, basement ceilings don’t have to be sheetrocked, inspections are more efficient, and plan approvals come faster.

“There’s one agency that reviews our storm water and wetland permits. In Minnesota, we have six in most communities we do business,” Rask said.

Small home builders are frustrated, too.

Tony Wiener’s family has been putting up homes since the late 1950s. Their company, Cardinal Home Builders, builds about 15 homes a year, mostly in the east metro area.

Wiener said he often gets calls from people wondering if there’s some way they could get a new home built for $250,000.

Wiener would like to see builders given more flexibility to find less expensive ways to hit energy conservation standards and he wants more consistent, lower fees from cities.

“Instead of having six to eight different organizations looking at a permit, could we get that down to one or two? It would speed things along,” he said.

Last month, a report from a home builder trade group charged that many Minnesota cities inflated their building and related fees by nearly $80 million statewide over five years. The organization alleged the money went to unrelated expenses. The League of Minnesota Cities said the builders’ study was flawed, and cities’ fees are fair and justified.

Still, builders and developers say they’re hard-pressed to bring a new home to market for less than $300,000, or complete an apartment unit for under $250,000. They contend the cost of red tape is an important factor limiting the state’s supply of affordable housing.

“If we want to try to get people into homes, we have to change what we’re doing. And it goes with density, zoning and codes,” he said.

Nonprofit housing developers echo many of the concerns of their for-profit counterparts.

Paul Williams, president of Project for Pride in Living, said policy makers should look at several requirements that jack up the cost of housing.

“Minimum lot size; maximum density per acre; number of people per unit: these are all standards and expectations that drive costs. And at $250,000 a unit, on the affordable end of things, we have to look at some more creative ways to bring down costs,” Williams said.

Irene Kao, a lobbyist for the League of Minnesota Cities, said it’s worth reviewing government regulation to see what might be prudently done to reduce building costs, keeping in mind that the state determines much housing regulation.

“There does need to be a comprehensive conversation about all of this,” Kao said.

But she also said there needs to be more encouragement of entrepreneurial and innovative approaches to lowering labor and material costs.

In fast-growing Lakeville, nearly half of renters have housing that’s unaffordable, meaning it consumes 30 percent or more of their income. Lakeville is on par with the Twin Cities region. City administrator Justin Miller said policy makers are open to a discussion with builders about ways to trim costs.

“If they have specific examples of areas that we should change and not put that on the taxpayers then we would be more than happy to have that discussion,” he said.

Miller said Lakeville has allowed builders to construct homes on smaller lots, for instance. But many times, he said builders have not put smaller, less-expensive homes on those lots.

Lakeville isn’t the only community giving builders some leeway. Minneapolis has relaxed parking requirements for buildings and will soon allow duplexes and triplexes in neighborhoods once limited to single-family homes. But that hasn’t kept builders and property owners from complaining about other city regulations and policies that add to their costs.