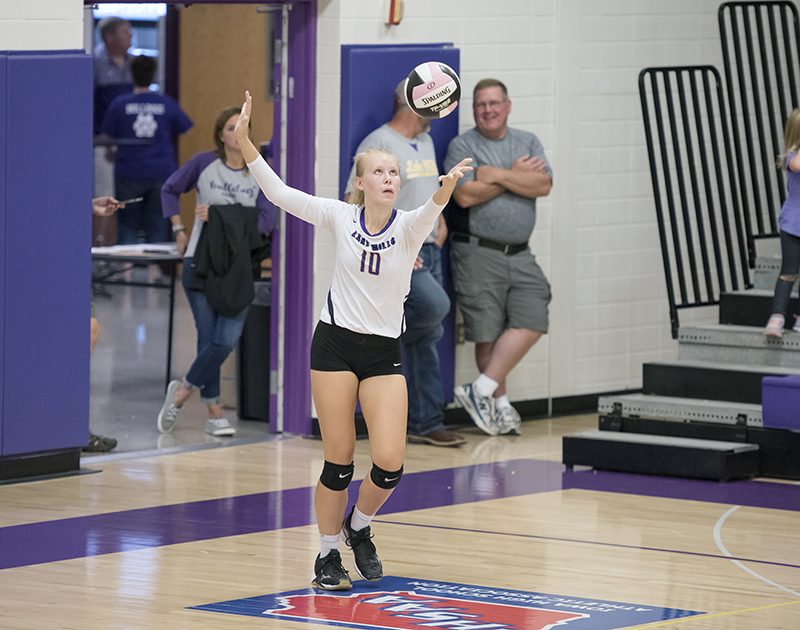 Senior Olivia Moen sets up a serve Tuesday night against North Union. The Bulldogs cruised to a three-set win over the Warriors, 25-8, 25-13, 25-17. - Lory Groe/For the Albert Lea Tribune

The team had a great night hitting at the net, totaling a kill percentage of .247. Senior Megan Groe led the way with nine kills herself, while juniors Summer Sterrenberg and Kylie Greenfield each had seven.

Lake Mills was also 66/74 from the service line, with all eight of the misses coming in the second and third set. Senior Hope Levine and junior Makenna Hanson were both perfect from the line.

“Serving-wise we were being aggressive, but we shot ourselves in the foot with eight missed serves,” Boehmer said. “They all came in set two and three. We have to be tougher at the line mentally, but I credit them for working on their aggressiveness.

“I was pleased with how we started tonight as a team, good energy and nice passion. We lost a bit of that in sets two and three. We need to maintain it throughout a match. I think we will do that as the season progresses.”

The Bulldogs move to 18-4 on the season and 6-0 in the Top of Iowa Conference. They will play again Saturday at a tournament in Nevada.