Dan Low, 66, of Northwood passed away Wednesday, Sept. 4, 2019, at Mercy One-Hospice of North Iowa with his family at his side after a long battle with cancer. 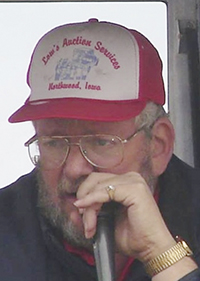 In honor of Dan, the family asks that you dress in casual attire. Memorials may be directed to Northwood Volunteer Fire and Rescue Co., 4-H or Mercy One Hospice of North Iowa inpatient unit.

Daniel Allen Low was born July 11, 1953, in Mason City, the son of Allen George and DeLoris LuDell (Flatness) Low. Growing up in Northwood, he was baptized and confirmed at Northwood United Methodist Church. Dan attended Northwood-Kensett High School, graduating in 1971. His working career began at Fallgatters, later working at Kraft in Mason City and eventually working beside Enos Loberg selling sprayer parts. It was then that Dan found his passion beside his father as an auctioneer. This was a career he held through his life, continuing the family business of Low Auction Services and Worth Realty. For numerous years Dan had the opportunity to serve as an auctioneer judge at the Iowa State Fair. For more than 40 years Dan dedicated his time, serving on the Northwood Fire Department.

Dan had a thoughtful, caring heart and was dedicated to serving others. He spent much of his time helping around the farm and was always excited to drive his International grain truck. He could often be found in the garden, taking just a few fruits or vegetables for himself.

Dan was a loving son and spent time caring for his parents throughout his life. He gave his time as an auctioneer to numerous organizations, including Pheasants Forever, Northwood-Kensett Schools and 4-H auctions. In his free time Dan looked forward to trips to the casino, where he was often much luckier than those he brought with him. He was known for playing jokes on those he loved, leaving tricks and traps for them. Most of all, Dan loved his family. He was a constant part of their lives, sharing in Sunday dinners, birthdays and numerous evenings together. He loved each and every one of them and cared for them constantly.

Dan was a longtime member of Northwood United Methodist Church.