Eugene “Gene” Donald Schlaak, lovingly known as Bumpa, passed away Monday, Sept. 16, 2019, in his home surrounded by his family under the care of St. Croix Hospice. He was 67 years old. 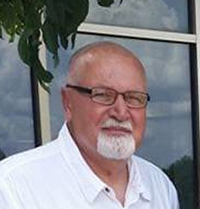 Memorial services will be at 10 a.m. Saturday at Hartland Evangelical Lutheran Church in Hartland. The Rev. Shawn Stafford will officiate. Burial will take place at a later date in Alma City Cemetery in Alma City. Visitation will be from 4 to 7 p.m. Friday at Friedrich Funeral Home in New Richland and one hour prior to services at the church Saturday.

Gene was born Aug. 30, 1952, to Lester and Alice Schlaak in Waseca. He graduated from New Richland-Hartland High School in 1970 and went on to Jackson Votech. He was united in marriage to the love of his life, Maryann (Norman) Schlaak, on Oct. 2, 1976.

Gene made his career in sales and agriculture, spending many hours cracking jokes at the “corn palace.”

Gene and Maryann had a stint in “nonprofits,” as Gene would say, as owners and operators of the Family Affair Drive-in restaurant in New Richland. He enjoyed playing games, creating hats and woodworking. He carefully pondered his many projects. His greatest joy was spending time with his wife, kids and grandkids. Bumpa’s jokes, laugh and warm embraces will be greatly missed.

Gene was preceded in death by his granddaughter, Alice Lee Schlaak; parents Lester and Alice; mother and father-in-law George and Irene Norman; and his brothers and sisters-in-law Stan Berg, Georgena Linbo and Roy and Delores Dyke.