Funeral services for Harold Dean Nelson Sr. will be at 11 a.m. Friday at First Lutheran Church in Albert Lea. The Rev. John Holt will officiate. Visitation will take place one hour prior to the service. Interment will be at Hillcrest Cemetery. 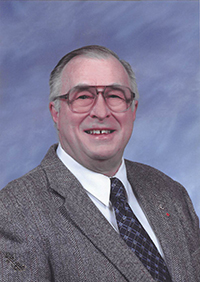 Harold was born July 5, 1934, to Olaf and Fern Nelson. He was a lifetime resident of Albert Lea, except for a short time spent in Arizona, and his acreage near Gordonsville. He was baptized as a Lutheran in Northwood and was confirmed at First Lutheran Church. He graduated from high school in 1953.

Harold was a machinist for Queen Stove and also in Minneapolis. Harold’s nickname should have been “Cribbage Board Harry,” because he made and gave away many cribbage boards to classmates at class reunions, Ducks Unlimited and for Lions Club raffles. Harold was a dedicated volunteer — a trait handed down by his mother, and received many awards for his service hours. One of his greatest accomplishments he was proud of was reaching a milestone of giving over 17 gallons of blood to the American Red Cross.

Other interests of Harry’s were cars, Volkswagens and his favorite — Corvettes. He belonged to the car club and went on many tours with his cars. He also enjoyed motorcycling, snowmobiling, hunting and fishing. A “Harry of All Trades,” he was skilled at cement finishing, carpentry, electrical, plumbing and working with cars, and was always available to help his friends with his talents.

Harold was united in marriage to Shirley Pardee. He was a father to Harold Jr., Mary Jo and Julie; and stepfather to CeCe and Patti.

He was preceded in death by his parents Olaf and Fern; sister, Mary; brother-in-law, Rollie Odgren; one nephew; and two nieces.

He is survived by his three children; and lifelong friends who shared in his life: Joe, Darrel, Truman, Barb, Paul and Dorothy and families; and his favorite cat, Peepers.

“We’ll join you later in a cribbage game. Goodbye, Harry, and God bless,” his family stated.

In lieu of flowers, memorials may be directed to the charity of the donor’s choice.