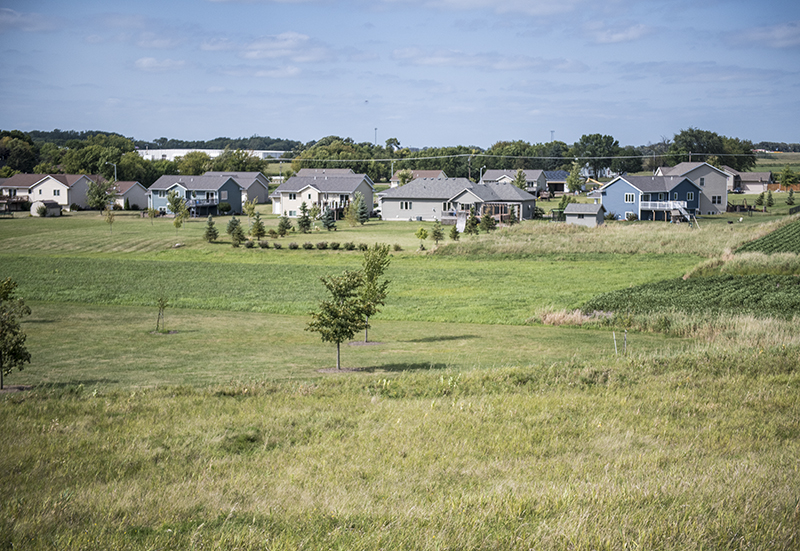 Twenty-nine lots — just over 40% of the lots in Tiger Hills — have yet to be sold out of tax forfeiture, including three that entered into tax forfeiture just this year. - Colleen Harrison/Albert Lea Tribune

Every day — twice a day, ideally — part of Judy Carlson’s walking route is a trip to the end of her street. The road simply stops; the pavement ends and the street’s slight elevation compared to the rest of the neighborhood means on Tuesday, the view from the end of Tiger Ridge Drive was swaying grass, soybean fields and a cluster of homes closer to the turnoff from Hammer Road.

Properties from the neighborhood have been sitting in tax forfeiture since the developer, Tiger Hills Development LLC, was unable to complete payments to the city for almost $1.4 million of work divvied up in assessments assigned to individual properties. The city amended both the first and second phase of the development agreement, in 2008 and 2011, respectively, to give developers more time to sell lots and then pay back assessments to the city as lots sold rather than on a set amount of properties per year.

After being placed on hold for potential purchase by the city in 2015, the properties went up for public sale in 2016, said Freeborn County Auditor/Treasurer Pat Martinson.

“I wish that we’d have seen a more fruitful time,” he said of the Tiger Hills development.

What happens in tax forfeiture?

When a property goes into tax forfeiture, the unpaid delinquent taxes are forfeited as well, Martinson said. This means the slate is wiped clean on assessments assigned to that property. The county is responsible for managing the sale or transfer of these properties. The county auditor/treasurer holds an annual sale, Martinson said.

The intention of relinquished assessments on a forfeited property is to give the property a cleaner title to transfer to a new owner after the property is auctioned off, she said. However, the city can — and did in Tiger Hills — reinstate assessments should the sale price of the lots not be set high enough to cover the assessments waived from the property when it went into tax forfeiture.

Prices for vacant lots sold by Tiger Hills Development LLC ranged from under $30,000 to over $70,000, according to county records.

Following forfeitures in Tiger Hills, the city set the sale prices in an effort to recoup those assessments. In 2018, the City Council approved changing the payment structure, said city of Albert Lea Finance Director Kristi Brutlag. Rather than ask for the full price up-front — for instance, $26,450.30 for a lot on Tiger Ridge Drive — buyers could purchase the lot for $3,000 and then work over five years to pay the remaining balance at 2% interest. The sales price would be deducted from the assessment balance, the resolution stated.

But the lots still weren’t selling. 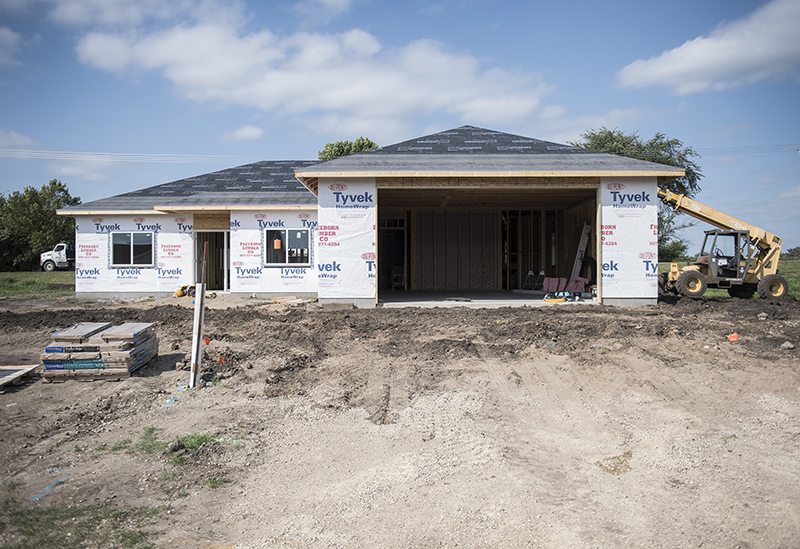 According to Ryan Rasmussen, the Freeborn County assessor, the rate of sale for properties at Tiger Hills is “pretty typical” of what the county sees from other forfeited lots, especially those with assessments tied to them, though he said later in an email that sales of vacant lots and construction of new homes has been slower over the past few years in Tiger Hills compared to other, newer developments in Albert Lea.

What’s less typical is to deal with a subdivision of tax forfeited properties, he said.

In an effort to increase sales, the City Council decreased the amount of assessments on 26 properties in Tiger Hills. Now, those wishing to buy the lots would pay $3,000 as the sales price and an additional $16,000 over five years at 2% interest. Three additional properties in Tiger Hills were approved for public sale and set with the same prices in the same resolution.

“You can only sell something that someone is willing to pay an amount for,” Martinson said. “… These have such large assessments that to set a sale price large enough to cover it, no one will purchase them.”

“Our tax base is lowering due to them — the untaxed state that they’re in,” Martinson said.

Even without development, empty lots still bring in tax dollars, but a further developed neighborhood would be a boom for the area, Martinson said.

Between the 29 parcels in tax forfeiture, Ryan Rasmussen estimated the tax that could be collected would be roughly $15,000 a year.

“Our goal is with anything on forfeitures is to get them back on the tax roll,” Brutlag said.

The city will lose money due to lowered assessments, Brutlag said. But if the properties sit, unsold, with assessments for 20 years, they do not bring any money into the city, either, both in terms of unpaid assessments and property taxes the city is missing out on, she said.

“I still believe that we’re doing what we feel is best … trying to get those properties sold,” Brutlag said.

The city and county have had numerous conversations and tried different scenarios, and are still working hard to get the properties moving, Martinson said.

Vern Rasmussen Jr. said he fully expects that at some point, the Tiger Hills properties will sell. The best decision for the city is to move forward and get taxes from the property for all to benefit from, he said.

“What happened in the past is the past,” he said. “We only make decisions based on what’s happening now.”

Judy and Richard Carlson purchased their Tiger Hills property as a lot and built on it, moving in in 2011, she said. They loved the lot — they have a pond in their backyard.

They knew Greg Moen, Judy Carlson said, and he encouraged them to buy it. She said Greg Moen is “a great guy.”

Later, the purchases slowed way down.

They thought it was going to be an up-and-coming neighborhood, Carlson said, and it was unfortunate that it stalled.

“We were thinking it was just gonna be a big development,” she said.

Carlson said she is happy with the neighborhood now; it is peaceful, close-knit and a good mix of young and old, with a Facebook page and efforts made to get together. She said residents raised money for the neighborhood’s playground themselves.

The Carlsons’ street has four homes on it where there is potential for a few more. Throughout the neighborhood, houses sit in clusters — two here, three there — with wide gaps separating them from other huddled-up homes.

On the opposite end of the neighborhood, workers make progress building a new house.