Funeral service for John Haines will be at 2:30 p.m. Wednesday at First Lutheran Church in Albert Lea. Visitation will be from 5 to 7 p.m. Tuesday at Bayview/Freeborn Funeral Home and for one hour prior to the service Wednesday. Interment will be at Hillcrest Cemetery. 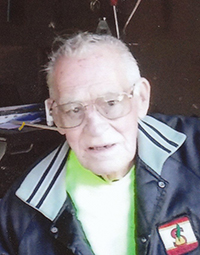 John Haines was born June 14, 1935, to Harry and Sarah Haines. He was married Sept. 3, 1955, in Fairmont to Jo Ann Lien. John was a member of First Lutheran Church. He served his country as a Marine in the Korean War.

Following his service, John worked at Wilson & Co./Farmstead for many years until his retirement. His favorite time was spent with his kids and grandkids. He also very much enjoyed all of his memories he had through the years at his cabin near Whitefish Lake. He would often say the highlight of his mornings was having coffee at Nancy’s Cafe with the groupies.

They say that dynamite comes in small packages. John was living proof of that. He had a passion for deer hunting, fishing, the Minnesota Twins and the Minnesota Vikings.