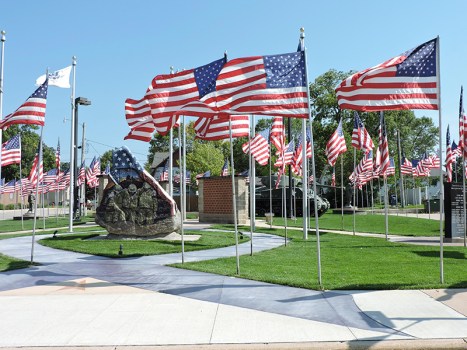 Arlington Park has evolved into a veterans memorial since the idea was conceived by Leon Christianson in 2003. The park was home to a Sherman tank donated in honor of Lake Mills Brig. Gen. Joseph Colby. It has grown to include a marble killed in action stone, four walls made of memorial bricks dedicated to veterans, a purple ribbon walkway that surrounds the Freedom Rock, four statues of soldiers, 130 American flags, a symbolic burial mound and a gold star inlay in the concrete. - Kelly Wassenberg/Albert Lea Tribune 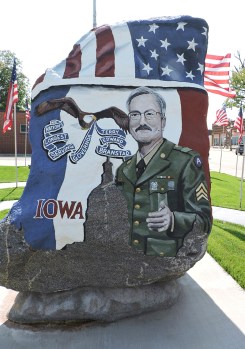 Terry Branstad, the nation's longest serving governor, is displayed on the north side of the Freedom Rock in Lake Mills. The south side of the rock is draped with the stars and stripes, as well as the symbols for others who have served their country — police officers, firefighters and those who work with emergency medical services. - Kelly Wassenberg/Albert Lea Tribune 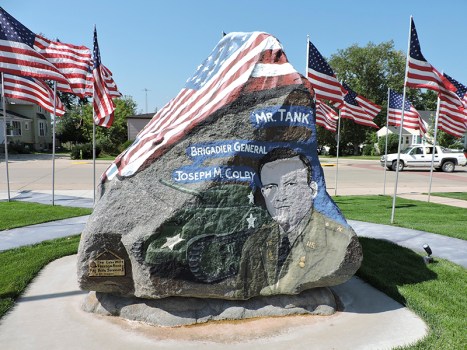 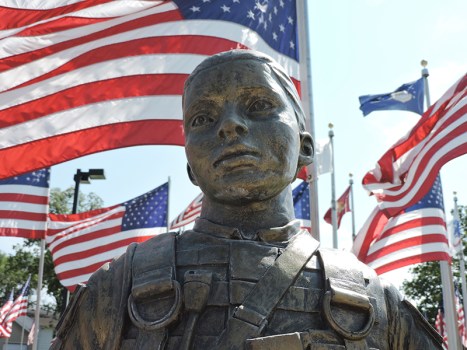 Three statues of soldiers have served as symbolic guardians of the veteran’s memorial at Arlington Park. The fourth soldier was purchased in 2017 and represents the women of the armed forces. - Kelly Wassenberg/Albert Lea Tribune 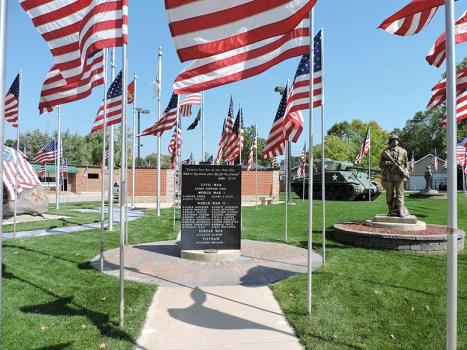 A black granite stone, referred to as the killed in action stone, rests at Arlington Park and lists the names of each person within the Lake Mills Community School District who has given the ultimate sacrifice. - Kelly Wassenberg/Albert Lea Tribune

No man ever truly dies unless they are forgotten.

Those words are not lost on Leon Christianson of Lake Mills, who first conceived the idea of expanding Arlington Park into a veterans memorial in 2003.

“I just thought we needed to do something to build that park up and recognize our veterans,” Christianson said.

His fundraising efforts started with selling memorial bricks for four walls that would be in the center of the park.

Anyone who was a member of the Lake Mills School District or a family member qualified to have their name on the wall, but Christianson knew he couldn’t just expect everyone who served in the area to have someone living in the area who would step forward and purchase a brick in their name. He found that unacceptable.

“I went to all the cemeteries in our school district and got every name of every veteran buried there,” Christianson said.

Many he found didn’t have family in the area anymore so he started looking for sponsors for the veterans. Many community members stepped up, many adopting more than one soldier’s name.

“Everyone who is buried in our school district without a family is on these walls, so they’re never forgotten,” Christianson said.

There are 1,200 names of veterans on the walls, and every space is filled.

“Now we have the task of figuring out where we can put another wall because we have a number of requests for more bricks,” said Vietnam veteran Bill Clark, who has played an active role in supporting the creation of the park. “This is a good problem, and we will solve it.”

In 2003, the Sherman tank gifted to the city of Lake Mills in honor of Brig. Gen. Joseph Colby in 1962 was also renovated, repainted and moved to the back corner of the park.

The park was dedicated in a special ceremony in 2004, and the additions continued.

The Killed in Action stone was added in 2005. The front of the monument includes the names of every veteran from the Lake Mills area who gave the ultimate sacrifice to their country. The back includes images of each soldier.

Among these names is Glaydon Iverson of Emmons, who died during the attack on Pearl Harbor. His remains were unidentified for over 75 years before his family finally received word that he would be coming home.

The stone also lists the name of Vernon Okland, who receives a special honor at the park. Realizing the terrain of the park was quite flat, Clark said the decision was made to create a small hill.

The dome shape resembles a burial mound. An American flag etched with the name of Vernon Okland, the last veteran who died in the line of duty. His flag is the first to be raised when the flags go for Labor Day. Those present give their respects to Okland and every other veteran who has fought for the nation’s freedoms before continuing with the rest of the flags.

In 2010, the park saw the addition of three soldiers, who were strategically posted at the corners of the park. The fourth and final post was not filled until 2017, when a statue of a female statue was purchased for the memorial.

While there was an empty post in the back, the decision was made to put her in a more noticeable position. A male statue in the northwest corner was moved to the back, so she could be displayed more predominantly.

“She’s a focal point, and she should be, because she represents our country just like these men do,” Clark said.

The Freedom Rock was a 2017 addition as well.

Ray “Bubba” Sorenson II  was commissioned to paint a 32,250 pound rock, which was moved to the park from its original location in Emmons.

The shape of the rock allowed the artist to paint four different scenes. The west side of the rock depicts a medic and another soldier helping a wounded soldier off the battlefield. The words “He ain’t heavy, he’s my brother,” are discretely hidden in the men’s uniforms. A shadowed image of soldiers raising the flag at Iwo Jima rests above.

The south side is draped with the stars and stripes along with the emblems for first responders, including police, fire and emergency medical services. The north face pays homage to former Gov. Terry Branstad. The east side, which would be considered the back of the rock, pays homage to Colby.

The whole project has been a group effort.

“If it wasn’t for people wanting to donate their ime, their money, their energy their enthusiasm — this park wouldn’t be here,” Clark said.

He has been grateful for his friend’s idea, and the community’s support.

“For a veteran to come and sit on one of those benches and be there by themselves — listening to the wind whip our glorious flag — it’s moving,” Clark said.

Terry Branstad was born in Forest City, Iowa. He grew up on his family farm south of Leland and attended school in both Leland and Forest City. After graduating with the class of 1965, Barnstad attended the University of Iowa, where he majored in political science and sociology.

He served 23 months in the United States Army as a member of the military police before enrolling in Drake University in 1971 to study law.

Branstad was the youngest-serving governor in the nation when he was elected to the position at the age of 36. While that record has since been broken, he still holds the title for being the longest-serving governor in the nation. He was elected to his sixth non-consecutive term in 2014. Branstad stepped down from the position in 2017, when he accepted the nomination of President Donald Trump to serve as Ambassador of the United States to the People’s Republic of China.

He also served as the president of Des Moines University from 1999 to 2005.

Born and raised in Lake Mills, Joseph Colby was a 1922 graduate of Lake Mills High School before attending the Virginia Military Institute and the University of Iowa. He became a cadet in the U.S. Military Academy at West Point and graduate in 1929.

Colby worked his way up to the title of brigadier general and in the process became an authority on tank design and development. According to a May 2, 1957, Forest City Summit article, Colby  was considered by Defense Department leaders to be the “Father of World War II tanks.”

Colby is mentioned in “Camp Colt to Desert Storm: The History of U.S. Armed Forces, as well. The book noted that Colby and Maj. Gen. Gladeon M. Barnes, chief of ordnance research and development, proposed what was considered at the time to be a radical change in the design of a tank.

Realizing that German tanks were far superior to the Sherman tanks in use at the time, the men simplified the design of the hull, making it into a box by eliminating the sponsons — or an enclosure that projected from the tank — which also needed to be protected by armor. By eliminating the sponsons, they were able to design a tank with a thicker armor that could handle the heavier artillery used by the Germans while keeping the weight of the tank approximately the same.

He was responsible for a number of innovations and inventions that were incorporated into weapon systems. According to his biography at the Ordnance Corps Hall of Fame, which he was inducted into in 1988, these advancements included the torque converter transmission for tanks, transverse transmissions, torsion bar suspensions and the concentric recoil mechanism for tank cannons. Colby was also recognized for incorporating synthetic rubber into American tanks during World War II.

During his service, Colby served tours in Europe, North Africa, Asia and the Middle East. He was a highly-decorated veteran, receiving military decorations from the United States, Great Britain, France and Greece.

Colby retired from active duty in 1959 and served as vice president of North American Rockwell Corp. before his death in 1974.