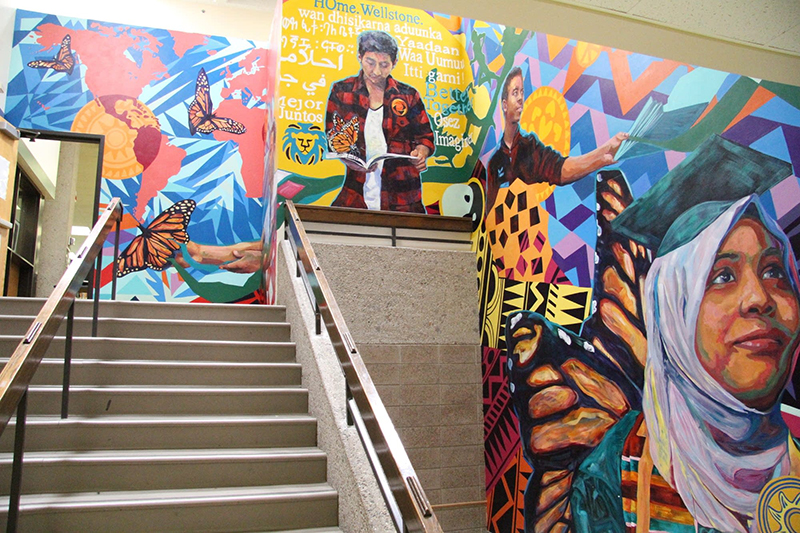 Eighteen years ago this September, Hared Mah walked into the Minneapolis Public Schools’ student placement center to see whether he was qualified for the K-12 education system.

Mah, then 18 years old, had just arrived in the United States as a refugee from Somalia and spoke no English. But he was determined to utilize any opportunity he could get to establish a better life in his new home.

After taking the placement test, Mah was sent to the International Center for Accelerated Language Learning, now Wellstone International High School, which served brand new refugee and immigrant students in their late teens.

There, Mah became one of a few dozen students from Somalia, Ethiopia and Mexico to attend the inaugural year of the school, where he found peers with similar life experiences and teachers who nurtured him.

“It was a really good experience,” Mah said on a recent evening, sipping coffee at Spyhouse Coffee in northeast Minneapolis. “We were so determined. We just wanted to be independent.”

For nearly two decades now, Wellstone has served as a training ground for hundreds of young refugee and immigrant students, many of whom grew up to be economists, health professionals and engineers — even as its population has fluctuated with each stroke of a presidential pen that expanded or reduced refugee admissions to the United States.

In recent years, though, not many people like Mah are entering the country because of the Trump administration’s crackdown on immigration and the sharp reduction in refugee admissions. As a result, Wellstone is bracing for one of the lowest student enrollment years in its history.

But it’s not just Wellstone that’s witnessing the ripple effect of the dwindling number of refugees entering the country. Refugee-serving agencies in Minnesota have also seen a dramatic decline in the number of refugees coming to their doorsteps for resettlement services.

To keep the infrastructure alive, Wellstone and service agencies are finding new ways to adapt to the changing refugee-services landscape — by shifting resources and tapping into new demographics.

On the campaign trail, Trump made immigration central to his campaign, promising his base to deport undocumented immigrants in mass numbers, build a wall on the U.S.-Mexico border and deny entry to refugees escaping violence and persecution.

After he took office in 2017, the president followed through with many of his promises. For example, he barred people from certain predominantly Muslim nations, including Somalia, from entering the U.S. and reduced refugee admissions to the lowest level since the program was created in 1980.

Those restrictions have affected the refugee stream to Minnesota, which for years has been one of the top states for refugee resettlement. More than 3,000 primary refugees arrived in Minnesota in 2016, but only 1,000 came in 2017, and 660 last year, according to figures from the Minnesota Department of Human Services.

The dramatic reduction in refugee admissions will be felt this school year at Wellstone, where the student population has dropped from 400 four years ago to 180 now, according to school counselor Ali Kofiro.

Though the students at the school have come from all over the world, including East Africa, Southeast Asia, Central America and Mexico, Somalis typically were the majority. In 2015 and 2016, for instance, 65 percent of the students were Somalis. Today, that number is less than 30 percent.

“I feel hurt by the fact that a specific demographic at Wellstone has been taken away from us,” said Aimee Fearing, former Wellstone principal who now serves as the executive director of K-12 academic programming at Minneapolis Public Schools.

Muhidin said that such anxiety is caused not just because of the dramatic reduction in refugee admissions but also because of the broad xenophobic and anti-immigration sentiments that have increasingly become a normal part of immigrants’ life experiences these days.

“Some of our students are scared,” she said. “We hear students saying, ‘We have to carry around our IDs.’ (This) makes us scared for our students and worried for them.”

The reduction in refugee admissions is also affecting nonprofit organizations and resettlement agencies that often rely on serving refugees to get funding.

Nationwide, dozens of resettlement offices have either closed or are in the process of doing so as a result of a growing uncertainty about the future of refugee admissions under the Trump administration.

In Minnesota, Catholic Charities of St. Paul and Minneapolis — one of five resettlement agencies — closed its program last September, after nearly five decades of resettling refugees from around the world.

“It wasn’t often that we would have fewer than 100 people being resettled by the agency,” said Laurie Ohmann, the organization’s executive vice president and chief operating officer. “One of the issues that we came to see happening that was different in recent years is the predictability became even more unpredictable.”

Other agencies — including Lutheran Social Service of Minnesota, Arrive Ministries and the International Institute of Minnesota — are reporting fewer employees in their resettlement offices than they did before the Trump administration.

“We lost three employees in the last year,” said Maureen Warren, chief family service officer at Lutheran Social Service of Minnesota. “We’ve left all the positions that people voluntarily vacated vacant. It’s always better to cut staff that way than to have to lay people off.”

At the International Institute of Minnesota, the refugee resettlement office had eight employees, said Micaela Schuneman, a director with the agency. Today, that number is five.

To keep the refugee services infrastructure alive, resettlement agencies are shifting their service priorities. Nikki Farago, assistant commissioner with the Minnesota Department of Human Services, said the state’s federally funded refugee resettlement office is one of them.

Since there aren’t as many refugees coming these days, she said, the office is now funding programs that would enhance the living conditions of refugees who have been in the state a little longer.

“For example,” Farago added, “instead of funding job placement only, we’re looking to those providers to provide funding assistance to help people that are already working to secure higher paying jobs.”

Lutheran Social Service of Minnesota has also shifted its focus more on immigration services since there have been fewer and fewer refugees coming to their doorstep — and since the agency lost some funding due to the decline in refugee admissions.

“We have a lot of support from our congregations and from people that have long been associated,” Warren said. “So, we’re supplementing the decline in federal dollars with private philanthropy and donations from congregations.”

Bob Oehrig, executive director at Arrive Ministries, said his agency has hired more workers to help with the increased social services — such as ESL programs as well as employment and citizenship support services — for immigrants.

“We have more staff than we did two years ago because we’ve been growing other activities,” he said. “We have staff now in St. Cloud. We have staff in Willmar. We’re talking about putting some programs down in Rochester.”

For administration and teachers at Wellstone, it’s not clear what the shift would look like. But they’re discussing a potential change in their instructional method to accommodate the school’s now majority Spanish-speaking population, Fearing said.

The teachers once taught predominantly East African students, whose native languages had no resemblance to the instructional English language, Fearing said. They’re now dealing with Latino students who often come with formal education and whose language shares commonalities with English.

“There are a lot of explicit connections that they can make with Spanish in the classroom,” Fearing said of the teachers. “Years ago, it wouldn’t make any difference because most of the languages spoken in the classrooms were not similar to English.”

Carol Dallman, a social studies teacher, has been with Wellstone since 2003 and watched the student population fluctuate under three different administrations. While she understands the challenge of trying to operate a school with fewer students, she remains confident that Wellstone is able to weather the storm in the years to come.

“We are part of the Minneapolis Public Schools,” she said. “So, we can tap into district resources and find solutions within the district. And so, I believe that we will be able to find our niche and adapt as immigration patterns change.”

That’s that spirit that has kept the school going since Mah walked into the door in 2001. Three years later, Mah became fluent in English, excelled academically and earned a spot at the University of Minnesota, where he graduated in 2009 with an economics degree.