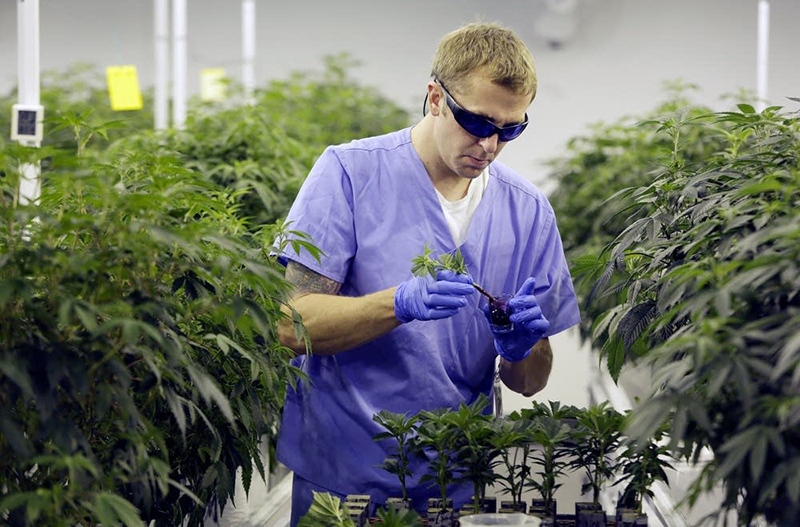 A worker transplants a cannabis plant at LeafLine Labs in 2015. - Jeffrey Thompson/MPR News

The two companies in charge of manufacturing all medical cannabis products in Minnesota said their vaporizer oils are safe as the number of severe lung injuries tied to vaping continues to climb in the state and nationwide.

However, the Minnesota Health Department said it cannot give the products “complete assurance of safety until investigators determine a specific cause of the lung injuries.”

Preliminary findings from public health investigations have fingered Vitamin E acetate in some illicit and illegal marijuana oil cartridges as a likely cause for the injuries, which have hospitalized hundreds and killed at least six people, including a Minnesota man.

Leafline Labs and Minnesota Medical Solutions, the state’s medical marijuana manufacturers, don’t use Vitamin E acetate in their products, they said. The companies said patients should contact them with any issues with their products.

As of July, there were 17,202 patients in Minnesota medical cannabis registry, according to the health department. That’s a nearly 60 percent increase from the previous year.

While it stands by its testing procedures, Leafline — the larger of Minnesota’s cannabis firms — said it has commissioned additional testing to ensure safety.

“Our vaporization oils are made from 100% cannabis oil, and all terpenes present in the oil are exclusively derived from the plants we grow in our indoor cultivation facility,” the company said in a statement.

Minnesota Medical Solutions, also known as MinnMed, said it’s continuing to monitor injuries tied to vaping and that none of its patients have been affected. The company said it has produced more than 100,000 vaporizer cartridges since 2015.