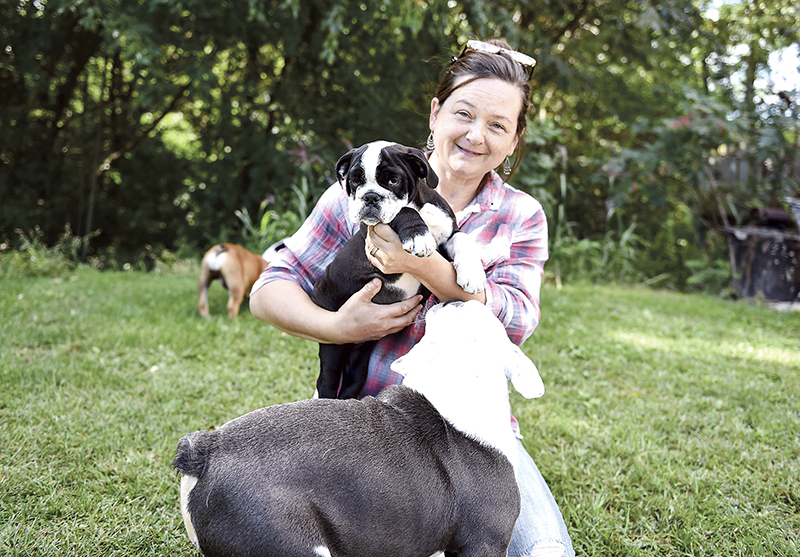 Leah Dulaney, owner of Lonely Acres Bulldogs north of Lansing, holds the puppy who will be gifted to a veteran in a partnership with the American Legion Post 91 Riders. - Eric Johnson/Albert Lea Tribune

Ever since she worked with Gina Grundmeier for the Pay-It-Forward program in Dexter, Leah Dulaney found herself wanting to do something special of her own.

Outside of Austin, near Lansing Township, is Dulaney’s home — known as Lonely Acres Bulldogs, where she breeds and raises bulldog puppies. Last year, she gifted a puppy to a veteran who she felt needed a companion with unconditional love through a partnership between herself and American Legion Riders Post 91.

The program the parties created is called “Bullies for Vets.”

“Animals do so much for our souls and emotions,” the former Albert Lea animal control officer said. “I chose veterans because they give so much, and I truly believe that dogs can give them more love back. I didn’t anticipate the highs and lows with raising bulldogs, but it’s been an adventure. I wanted to share and give back, and I respect our men and women who have given so much in the name of our country.”

For someone to receive the puppy, the person must be from either Minnesota or northern Iowa and be nominated by having an application submitted via email or the group’s Facebook page. Whether it’s someone who is a friend, spouse or co-worker, the goal was to nominate a veteran who would benefit from having a canine companion.

Once applications are submitted, American Legion Riders Post 91 will narrow down submissions and chat with the nominated veterans. From there, a decision will be made Oct. 5 on who will be taking the puppy home.

“It’s really important to me that this is done ethically,” Dulaney said. “I want to make sure that this dog goes to a good home. I’m excited about this whole venture and I’m really excited that the Legion Riders want to make this a big thing.”

Dulaney has a special connection to the breed, noting its personality and ability to form a special bond to “their person.” It’s the hope that eventually her dogs will be able to become certified service animals  by trainers who are willing to donate their time for veterans with disabilities, or for veterans struggling with post-traumatic stress. Until then, the bulldogs are considered to be emotional support animals.

One look at the puppies, and Dulaney believes those who are seeking something to help them cope is a bulldog and its unique personality.

“I think they’re reincarnated as comedians,” she said. “The one thing about bulldogs is that they don’t run away from you. They’re real people dogs and they want to be with humans. The favorite place for a bulldog is on your lap or right next to you. That’s their favorite place to be.”

Although she doesn’t know for who yet, the 12-week-old English bulldog puppy will serve a greater purpose in a matter of a few weeks. 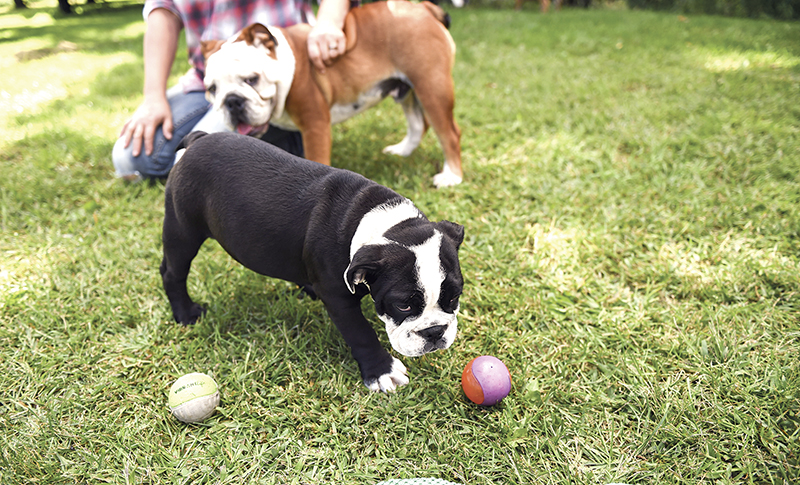 A bulldog puppy, MJ, from Leah Dulaney’s Lonely Acres Bulldogs north of Lansing, plays with a pair of toys. The puppy will be gifted to veteran in a partnership with the American Legion Post 91 Riders. – Eric Johnson/Albert Lea Tribune

MJ (short for Mary Jane) is a 12-week-old English bulldog. Already exhibiting human-like tendencies, MJ spends her days sleeping, eating and playing like any other puppy. Immediately taking a liking to her current caretakers, Roe Naylor, a member of American Legion Riders Post 91, and his son, Zach, the bulldog saunters around the house and attached herself quickly to Naylor’s son in particular. Even if he shuts the bathroom door, MJ will get upset and sulk until he reappears. As long as her friend is in her line of sight, MJ is happy.

“She wants to know where he is, and they’re very loyal and amazing,” Naylor said. “She’s such a cool dog and is so amazing. Even when she makes a mess or has an accident, the look she gives you, it makes you smile. One look from one of these puppies and it’s game over.”

There was only a slight twinge of sadness knowing that MJ has attached herself to his son, but Naylor knows that MJ will be going to a home for someone who needs her love and companionship. So, he has to keep his heart from completely falling for MJ, otherwise, he’d never let her go.

“It’ll be alright,” he said. “It’s a cool program and I’m very proud to be a part of it. I’m so glad that Leah brought this to us and asked us to help her. I really believe this puppy will be beneficial to someone. We gave away one last year, and I’ve seen the pictures, and boy, that guy was emotional. It meant something to him. I hope someone finds that MJ will mean something to them and helps them.”

Having a dog as a companion  is something Naylor believes would affect those who have served, and maybe something that veterans need in order to heal, as well as finding someone to talk to about things that may be harder to discuss with fellow humans.

“This is unconditional love,” he said. “If you’re having a bad day, this puppy is still going to love you. Sometimes, some of these veterans are having these problems and don’t talk to their family members and don’t talk to their doctors. But, for me and a lot of people, it’s easy to talk to your dog about anything. We’re hoping this will help and give them somebody to talk to, or just something to love. It always makes them smile.”

Once a veteran receives the puppy, Naylor said that through donations as well as volunteers, the goal is to ensure the recipient would not be burdened financially through caring for the dog. They hope to eventually have funds available for veterinary costs and work on getting donations for dog food and other essentials.

“We want to be there to help out,” Naylor said. “Leah does such a good job with raising these puppies, and she wants to do the right thing. We work hand in hand, and she does so much behind the scenes. I’m really proud that she let us be involved with this. Hopefully, we’ll get some trainers involved and look at partnering with a veterinarian to help with costs throughout this dog’s life. We don’t want to place more burden on someone who’s already experiencing financial hardship.”

For a short, chubby and wrinkly puppy, MJ exudes a loving and loyal personality to whoever cares for her. Even for battle-worn veterans coming back from Iraq or Afghanistan, or even having experienced the Vietnam War, their hardened exteriors break down when a puppy gets involved.

“That’s just it,” Naylor said. “These guys have seen action, they got their patch and came home. One got blown up two times by bombs while in Iraq. You sit and talk to them, and they’re kind of hardened. But, when these puppies and dogs come around, they make a man into a mouse. That’s what it is. You can see it. They’ll hold it, and the puppy will lick their face, and you’ll see the soft side to this veteran. They have to be hard when they’re in battle. But, there’s this soft and gentle side to them that these dogs bring out.”

One of Naylor’s friends was an amputee and found a companion named Chance that was a German shepherd. Naylor has seen what the effects of having a loyal friend does to someone who has seen combat.

“This dog was so loyal and protective,” he said. “He’s always protective, then you look at him and it’s just us, he’s like a giant puppy. Randy would cuddle his dog and sleep in his cabin. He wouldn’t go anywhere without that dog, and they’re companions 100 percent. He said without Chance, he wouldn’t know where he would be. It made me more of a believer in this program. We’re looking for someone to have a connection with this puppy, and take a hardened, seasoned veteran and take him back to his childhood and happier times.”

Go to www.lonelyacresbulldogs.com/bullies4veterans for more information on how to submit nominations, which are due by Sept. 22, according to the site.