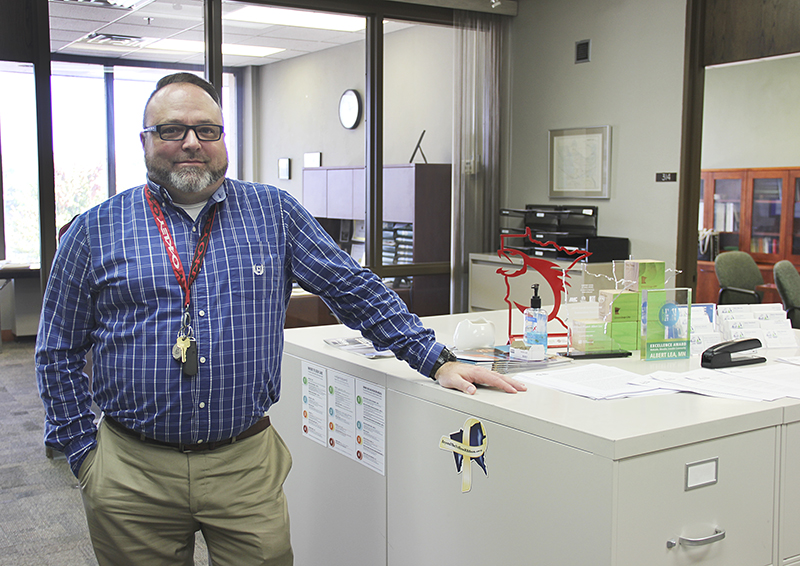 David Todd started as the new Albert Lea city manager Sept. 23 after being selected by the Albert Lea City Council for the position in July. - Sarah Stultz/Albert Lea Tribune

In his first week as Albert Lea’s new city manager, David Todd has been busy meeting with city staff and familiarizing himself with the community.

Todd, who lives in Rochester and is commuting to Albert Lea for the job, said he looks forward to meeting as many community members as he can.

Todd was selected by the Albert Lea City Council in July for the position after former City Manager Chad Adams was hired to become the CEO of the Southwest Minnesota Housing Partnership.

Todd said he was attracted to the job in Albert Lea for many reasons, including its beauty and how active the community is. He said he also thinks the city is a well-run organization.

“I just want to serve any community I work for to the best of my ability,” Todd said. “Albert Lea has some wonderful opportunities here to grow and expand and it was the perfect fit for me.”

He has been learning the ins and outs of the city, and once he gets a firm grasp on that will branch out and take on more roles.

So far, he said he has been impressed as he has learned about the Main Street program that the city is applying to be a part of, which could help provide grants for downtown businesses, among other things. He is also interested in the planning for the future of the city.

He said topping his list right now, however, is the city’s budget.

Between now and December, department heads are scrutinizing their budgets further to work on shaving off any excess possible to lower the preliminary levy increase.

He said he was planning to meet with staff of the Albert Lea Economic Development Agency formally Tuesday, and noted he thinks Albert Lea has all the pieces in place to make it attractive to retail and other opportunities.

“The atmosphere is ripe for that kind of thing,” Todd said.

Todd comes to Albert Lea after working as the administrator of Pine Island, where he had worked since 2015, and Lanesboro before that in 2013.

He said after high school, he completed six years in the military and served in Central America for his entire service contract as part of the military police.

He then worked 20 years in law enforcement, starting out as a patrol officer and working through positions as bike patrol officer, a member of the special weapons and tactics squad, field training officer and received ranks of corporal, sergeant and ultimately patrol commander.

He said he initially wanted to be a chief of police but realized that “policing was a young man’s game.”

He has both a bachelor’s degree and master’s degree in public administration.

Outside of work, Todd said he is an avid sports fan, particularly football and baseball. He also enjoys traveling with his wife, Hilarie, and checking out new restaurants.

Interesting fact: Todd lived for six years in Central America while in the Army