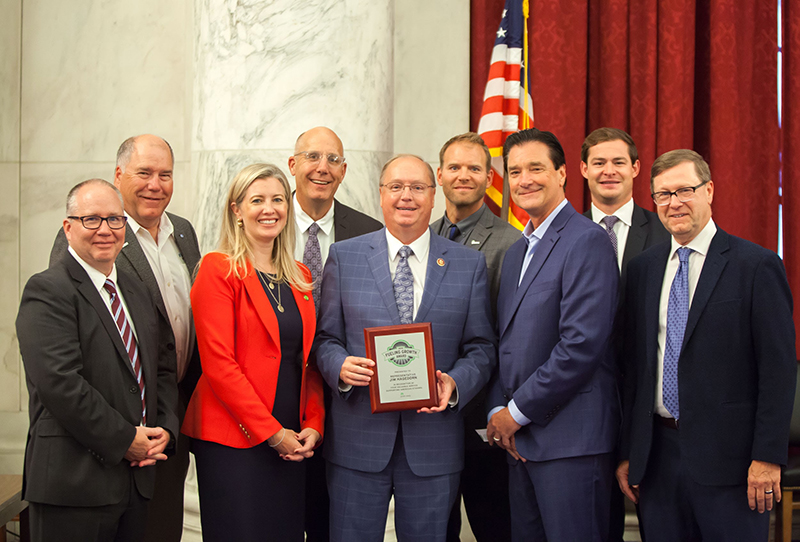 Jim Hagedorn, who was elected in 2018 to represent Minnesota’s 1st District in the U.S. House of Representatives, receives the 2019 Fueling Growth Award from Growth Energy. - Provided

U.S. Rep. Jim Hagedorn received the 2019 Fueling Growth Award from Growth Energy, a leading proponent of biofuels, according to a press release.

The award was presented to key members of Congress who support biofuels initiatives and recognize the contributions of the industry to the local economy, the release stated.

Hagedorn, a member of the House Agriculture Committee and the Congressional Biofuels Caucus, has cosponsored legislation to extend the biodiesel tax credit as well as a measure requiring greater oversight and transparency in the issuance of small refinery exemptions for ethanol.

“With two biodiesel and 11 ethanol plants across southern Minnesota, biofuels play a major role in the economic well-being of our district,” Hagedorn said. “I have a unique perspective on biofuels as my father, Tom, a grain and livestock farmer who represented southern Minnesota in Congress 40 years ago, worked with now-Senator Chuck Grassley to develop the original ethanol program.

“I will continue to support the extension of biodiesel tax credits and greater scrutiny over the issuance of small refinery exemptions. In fact, I again call upon the EPA and Trump administration to implement the ethanol program as intended by Congress. My thanks to all who advocate for biofuels and highlight how such initiatives stabilize commodity markets and benefit our farmers, agribusinesses and rural communities.”