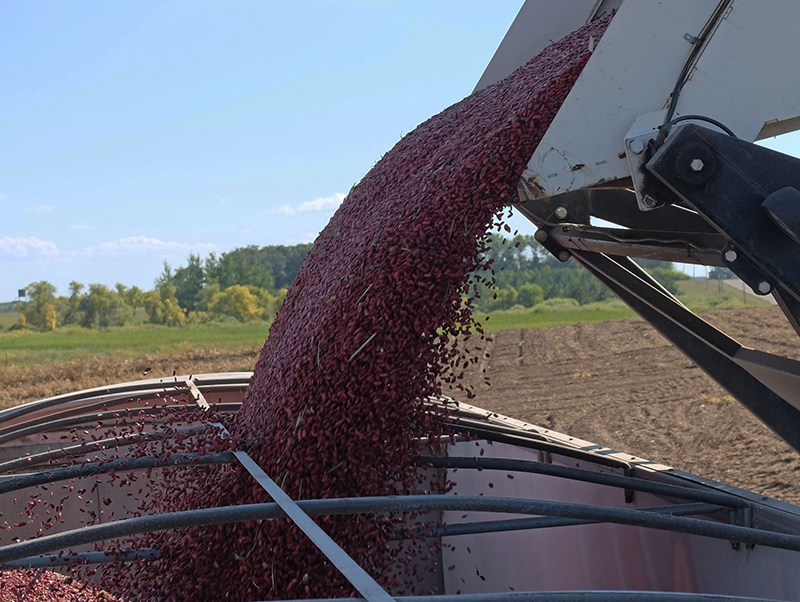 Kidney beans are emptied into a truck during harvest in a field on Mark Dombeck’s farm near Perham last week. - Dan Gunderson/MPR News

Minnesota farmers are known for the corn, soybeans and wheat they grow. But the sandy soil of north-central Minnesota is prime kidney bean land — and the state leads the nation in kidney bean production.

Mark Dombeck knows that firsthand. He’s been farming kidney beans on his land just outside Perham for decades.

His 800 acres have helped make Minnesota the national leader in kidney bean production. No state grows more of those small, red legumes that are the cornerstone of everything from late-fall chili to red beans and rice.

And no region in the state grows more dry beans than northwest Minnesota, including a triangle-shaped area around Dombeck’s farm where the soil is sandy and the kidney beans abundant.

“This would encompass everything from Perham, Wadena, Parkers Prairie, Park Rapids area,” Dombeck said. “It’s a major growing area in the world, and it works well with the irrigated sand.”

The conditions are ideal: Kidney beans have a shallow root system, so they do best here in the sandy soil with small, regular doses of water from irrigation sprinklers.

But despite the fact that, here, kidney beans are king, it’s a crop that doesn’t get a lot of attention.

“They don’t look real impressive from the road. It doesn’t look like corn or golden wheat. They look like short stubby soybeans,” said Dombeck. “But they’re a higher-value crop.”

For growers like Dombeck, kidney beans are reliably profitable. But they also require a long-term investment in specialized harvest equipment. They’re not subsidized by the U.S. farm program, and they are susceptible to damage from wet weather. It’s a classic higher risk, higher reward equation.

“The return is probably a little higher per acre,” Dombeck added, “but you need specialized equipment to handle it.”

Because plants grow so close to the ground, a machine scoops the plants up out of the soil and windrows them, leaving neat rows down the field for the specially designed harvesters that follow.

The harvested beans are dumped in an 18-wheeler parked at the end of the field.

The beans are usually harvested starting in early September. This year, the harvest has been delayed by persistent rains, Dombeck said.

A good harvest is 2,500 pounds per acre. That’s about two million pounds of kidney beans on the 800 acres Dombeck plants.

About 60 percent of the beans he’ll harvest are used in the U.S., and the rest are exported, said Dombeck: “Domestically, they’re going down to Faribault, Minn., for canning there, and for foreign export, most of them go to the E.U. or Central America.”

Relationships are important to maintain those export markets. Unlike most corn and soybean crops, dry beans are identity preserved. That means Dombeck needs to provide detailed records about the crop.

Sometimes bean buyers from other countries will even visit the farms where the product they buy is grown.

Kidney beans are just one of several varieties of beans classified as “dry edible beans.”

North Dakota leads the nation in overall production of dry beans, a broad category of many bean varieties, including pinto beans, lima beans, black beans and navy beans. The state produces about a third of all the dry beans beans grown in the U.S, making the region a bean powerhouse.

“When you take the North Dakota, Minnesota, [and] southern Manitoba growing region, half of the North American dry bean crop is produced in that area,” said John Bartsch, a trader with Kelley Bean Company, who also grows beans on an eastern North Dakota farm.

“And so if they have a good crop or a poor crop, it has an outsized impact on price.”

Because so many beans are grown in a single area, Bartsch said weather is often the biggest factor in bean production and price.

But lately, trade disputes have played a larger role in the direction of the industry.

“Right now, our competition for exports is Canada and Argentina,” said Dombeck. “They don’t have a tariff, so we’re at a disadvantage,”

The European Union has been a steady kidney bean customer for years, he added. But last year, trade disputes disrupted the relationship when the E.U. put a retaliatory tariff on the beans after the U.S. had placed tariffs on steel and aluminum.

“If we have everything resolved and no barriers to trade, we feel we can compete with just about anyone, anywhere,” said Bartsch. “The tariffs and the retaliatory tariffs are a trade disruptor and it leads to a lot of uncertainty.”

The trade uncertainty is casting a cloud over the industry, Barsch said, because some countries where bean exports are not affected by tariffs are expanding their production in an attempt to grab the market share that was, until recently, reliably held by U.S. exports.

He said while prices for crops like corn and soybeans can vary widely from year to year, dry edible beans have long been a dependable money-maker for farmers.

“A lot of growers said it’s paid for the farm over the years,” Bartsch said. “It’s been a consistently good crop. It’s not without its challenges, but it has been a good crop and well-adapted to the area.”

Dombeck said his kidney beans have turned a solid profit nine out of every 10 years. And despite the new challenge of tariffs cutting into his bottom line, he said he’s committed to the standby crop: He still expects to earn a profit on kidney beans this year.