Prairie Profiles: ‘Those are special’ 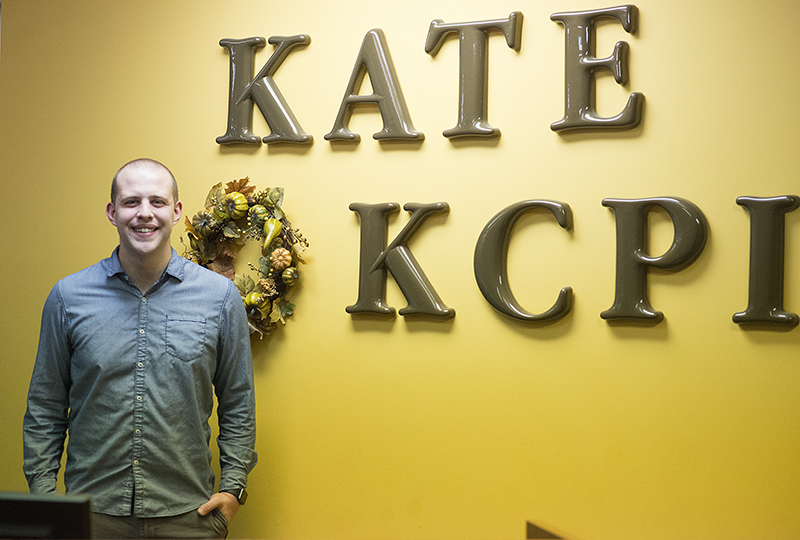 Nate Dickinson has been the Sports Director at KATE radio since July 2018. Dickinson grew up in Indiana and attended Syracuse University before finding his first job out of college in Albert Lea. - Tyler Julson/Albert Lea Tribune

Growing up in Chesterton, Indiana, a small town on Lake Michigan, Nate Dickinson was always surrounded by sports. Whether it was playing basketball or tennis throughout highschool or calling games for his high school radio station, Dickinson got involved in sports.

Now, as the sports director for KATE Radio, Dickinson is still a part of the sporting world, calling many local games as well as covering college and pro games.

While going through high school, Dickinson never thought about sports broadcasting as a future path. It took a state championship with his high school speech and debate team to convince him he could make a career out of it.

“Up until really getting involved with the speech and debate team, it was something that I never really considered as a career,” Dickinson said. “Of course, at the time, I had no idea that being good at speech and debate had nothing to do with being good at being a sports journalist or broadcaster. It just so happened it got me onto the route.”

After graduating high school, Dickinson went on to Syracuse University — one of the top journalism schools in the nation, graduating big names such as Mike Tirico, Nick Wright, Sean McDonough and Marv Albert.

He said a lot of people go into sports broadcasting at Syracuse and end up switching to news because they realize they don’t love sports like they thought they did or they aren’t willing to give up being a fan in the way that being a sports journalist requires. Dickinson was one of the few who made it through.

“Going to Syracuse, you realize once you get there that you need to turn it up a couple of notches to be able to keep up with everybody else,” he said. “I was able to do that. I made it through the wringer and now I’m here.”

Dickinson started looking for jobs immediately after graduating from Syracuse and found KATE to be a good fit for what he wanted. To be able to call games weekly, attend games in Minneapolis and some of the other colleges around were a big selling point for Dickinson. However, the thing about Albert Lea he likes the most is how much it reminds him of the town he grew up in.

“It reminds me a lot of my hometown,” he said. “Similar sizes, Albert Lea is actually a little bit bigger as far as population goes, but it’s a big family town. They’re similar in how far they are from big cities. The Twin Cities is a drive away, but you don’t feel like you’re in a suburb of the city. You’re able to get that small town feeling without feeling like you’re disconnected.”

Starting with KATE in July 2018, Dickinson has had just over a year to soak in some of the sports action Albert Lea and the surrounding communities have to offer. He said some of his favorite moments so far have been calling the football and basketball teams’ first wins in a few years.

“Those are special, not to me, but to the city,” Dickinson said. “You can feel that it mattered to the people that you were covering and broadcasting for and that’s really the first taste you get of that. It’s a lot different than covering something in the carrier dome. You come to Albert Lea and you feel that appreciation and you get a better sense of how much this means to people in a small community.”

Dickinson is on the air every weekday from 3 to 4 p.m. He said fans and listeners are welcome to call in and give their sports opinions. He also gives sports updates three times a day, at 7:20 a.m., 12:20 p.m. and 5:20 p.m. Dickinson also broadcasts games varying from week to week and his schedule can be found online at myalbertlea.com, on the Albert Lea Radio Facebook page or on Twitter at @KATERadioSports.

Interesting fact: Dickinson performed with his high school orchestra at the Rock & Roll Hall of Fame on a trip to Cleveland; Dickinson played the stand-up bass