Memorial services for William R. Sturtz of Albert Lea will be at 1 p.m. Monday at First Presbyterian Church of Albert Lea. The Rev. Dwight Netzer will officiate. Visitation will be from 4 to 7 p.m. Sunday at Bonnerup Funeral Service and one hour prior to the service at the church. Interment will be in Graceland Cemetery with military honors accorded by the Albert Lea area veterans groups. 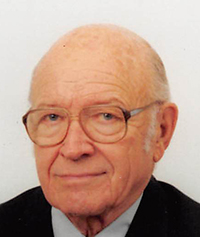 Bill was born April 7, 1925, in Albert Lea, the son of William P. and Gladys (Rosenberg) Sturtz. He graduated from Albert Lea High School in 1942 and was active in band, orchestra, chorus and theater. He then went on to the University of Michigan College of Engineering. He received his bachelor’s degree in 1948 and his law degree in 1951, both from the University of Michigan.

On July 23, 1949, he was united in marriage to Helen Schlotter and together they made their home in Albert Lea.

Bill served in the United States Army Air Corps from 1943 to 1945, Aviation Cadet Training Program commissioned 2nd lieutenant Jan. 6, 1945. He was in the Army Reserves from 1953 to 1974, retiring with the rank of major.

Bill was in general law practice with partners John F.D. Meighen, William P. Sturtz, Ralph Peterson and Thomas Butler from 1951 to 1969. He was Albert Lea city attorney from 1963 to 1969; village attorney for Alden 1961 to 1969; probate and juvenile judge in Freeborn County 1969 to 1972; county court judge 1972 to 1984; and district court judge, Third Judicial District, from 1984 to 1990. He retired April 30, 1990. After retirement he served as a faculty advisor for the National Judicial College in Reno, Nevada, and served on the college’s planning council.

Bill was a member of Albert Lea American Legion Post No. 56 and was a part of the post marching band, and also a member of the Careyaires men’s chorus, where he wrote the lyrics to “We’re the Careyaires.” He was a member of the Sherlock Holmes Society, Albert Lea Senior Resources, Rides Services volunteer driver, Freeborn County Historical Society, Readers Advisory Board for the Albert Lea Tribune, Society for the Preservation and Encouragement of Barber Shop Quartet Singing in America and the Harmony Junction barbershop chorus.

Bill enjoyed time with family, traveled to over 65 foreign countries, and was an avid bridge player with the American Contract Bridge League, winning the Life Master award in 1971. Bill loved the theater and was part of the Gateway Players of Albert Lea and the Albert Lea Community Theatre, where he participated in over 20 plays, and was stage manager, assistant director and director for three different plays. He was a part of the Minnesota Festival Theatre as an actor and housing host and directed several productions.

Bill enjoyed gardening, cooking and golf. He was active in Boy Scouts — he became an Eagle Scout in 1941. He was a member of the Minnesota State Guard, Albert Lea Municipal Band, Rotary International past president, district governor and attended international conventions in Switzerland; Tokyo; England; Munich, Germany; and Calgary, Canada. He was on the board of directors for Civic Music and served as president, was very active in Masonry as a member of Western Star Lodge No. 26, Grand Orator, Grand Lodge of Minnesota, Royal Arch Masons, Apollo Commandery, Osman Shrine in St. Paul, Albert Lea Shrine Club, Hiram Award Service to Masonry and a member of the Wednesday morning coffee group.

He was preceded in death by his parents; wife, Helen, in 2009; son, Richard Sturtz, in 1996; sister, Alice (Elmer) Kuehl; brother, John P. Sturtz; and Tracy Sturtz, wife of nephew, Donald.

Bill was a loving husband, father, grandfather, great-grandfather and friend to many. He was a generous man who helped many people — whether they were family, friends or other people in general. He treated everyone the same regardless of race, creed, color or economic status.

Memorials are preferred to the Rotary Foundation, Mayo Hospice or First Presbyterian Church.