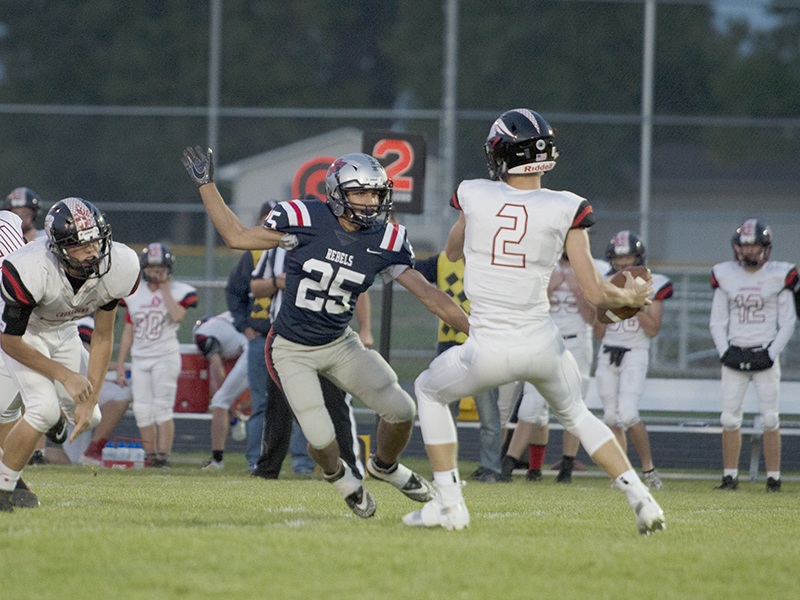 United South Central senior Brevan Linder prepares to make a sack during a game earlier in the season. Linder currently leads the state in sacks and has broken the school record for season and career sacks. - Tyler Julson/Albert Lea Tribune

WELLS — For the second consecutive season, the United South Central football team has ended the regular season undefeated and as champions of the Section 2A regular season.

Dating back since the beginning of the 2018 season, the Rebels are a combined 18-1 with their one loss coming at the hands of Blooming Prairie in the first round of last year’s Class A state tournament.

Head coach Brandon Neseth credits all of that success to the football IQ and dedication his players have for the game.

“The biggest thing is we have a lot of guys that really know what they’re doing, that have played a lot of football,” Neseth said. “You can see it, whether it’s a drill, in a game, even on tape, they just get the idea of what we want and the standard of how we play. Then they come out and they execute.”

Neseth also said the time spent in the weight room has played a significant role in the rise of the team. He said the team lifts three days a week and routinely has a majority of the players show up, which translates to their play on the field.

On top of the stellar play by the athletes on the field, the coaching on the sidelines has been top notch as well. Neseth was named week seven’s Gatorade Coach of the Week by Gatorade and the Minnesota Vikings. 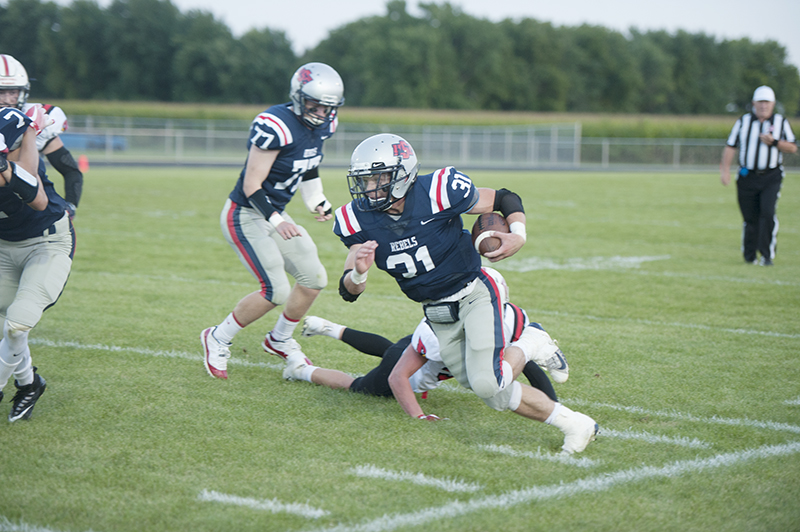 Zach Niebuhr runs the ball during his breakout 2018 season. The Rebels finished the season 10-1 with their only loss coming in the state tournament. They will be looking to avenge that loss this season, after finishing 8-0 in the regular season and earning the No. 1 seed in Section 2A for the second consecutive year. – Tyler Julson/Albert Lea Tribune

The award is given to coaches for their contribution on the field as well as the impact they make within their community and for their players. Included with the award, the football program received Gatorade product for the season and a $1,000 donation on behalf of the Minnesota Vikings.

Neseth talked about what the highlights have been for him over the past two seasons.

“The best part is seeing the guys’ hard work pay off,” Neseth said. “For them to see that by going to the weightroom, by doing all the summer stuff that they can be successful, they can get interviewed in the newspaper and they can get some of the accolades they have already gotten. It’s a really fulfilling thing for those guys.”

Before going undefeated in back-to-back regular seasons, the Rebels had a .500 season of 4-4 in 2017. Neseth said the jump in records was something the coaching staff saw coming.

“A lot of these seniors actually started as sophomores on that team, so we kind of saw what was coming” Neseth said. “We were 2-7 the year before that and we thought if we could get to around .500 it would be a success, and we were. To have that many underclassmen playing, we thought as seniors they could be a special group.”

Neseth said the future continues to be bright for the Rebels, with the junior varsity teams only losing one game last season and two games this season.

Even with the success this season, the team’s main goal has not been achieved yet. After beating Waterville-Elysian-Morristown Wednesday night, Neseth said the team talked about being 8-0 and winning the section. Despite the achievement, he could tell by the faces on the players that they were not content.

“Even on the guy’s faces, they just had the face like they weren’t content,” Neseth said. “Even one of the guys said ‘That’s not our overriding goal,’ and I thought that was really cool. It was a big night, they went out and beat a very good Waterville team and they weren’t satisfied yet and that was pretty cool.”

The Rebels kick off their postseason Tuesday, when they host the Knights of Alden-Conger/Glenville-Emmons. The two teams met already this season, with the Rebels coming out on top by a dominating score of 33-0.