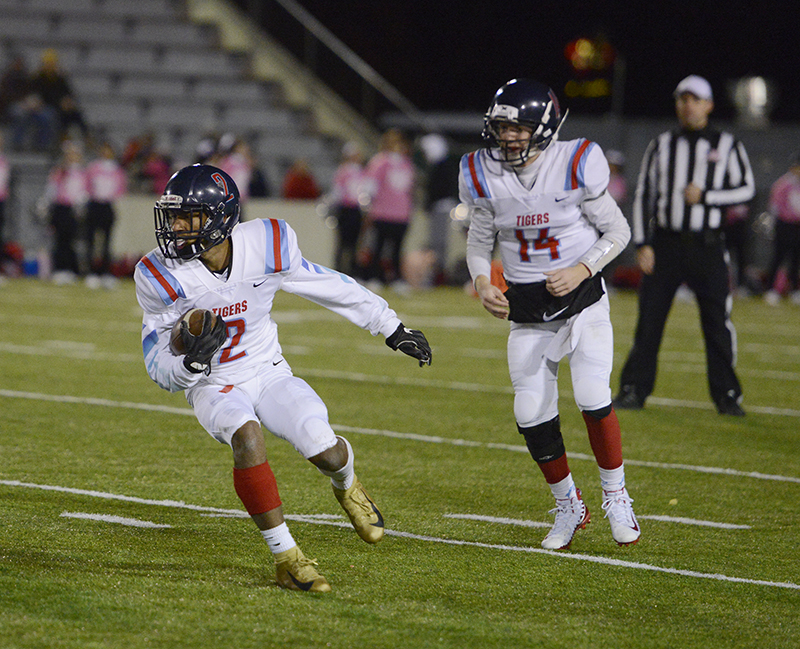 Senior J.J. Mucha-Owens makes a cut in the second quarter of Wednesday’s game against Austin. Mucha-Owens scored the Tigers’ second touchdown of the game on a 31-yard catch and pass from Logan Howe. - Tyler Julson/Albert Lea Tribune

After a punt on their opening drive, the Tigers found their stride, scoring three touchdowns in the first half and eventually downing the Packers 24-7.

A high snap on the first offensive play of the game put the Tigers in a compromising position right off the bat, as they were forced to punt the ball away a few plays later. Their defense came up strong, however, recording two sacks on the following Packers drive and forced them to turn the ball over on downs.

Starting at their own 22-yard line, the Tigers used big runs from seniors J.J. Mucha-Owens and Logan Howe to set up a Howe-to-senior Janyjor Ruei touchdown pass on a fourth and 10 at the 10-yard line. A successful PAT by senior Izzy Cabezas put the Tigers up 7-0 early in the first quarter.

On the ensuing kickoff, the Packers suffered from poor ball handling and gave the ball right back to the Tigers at the Packer 33-yard line.

Albert Lea used the great field position to its advantage and scored just two plays later when Howe connected on a short pass to Mucha-Owens, who ran 31 yards for the score. The Tigers found themselves up 14-0 in the first quarter.

Not to let the game get out of hand, the Packers marched down the field on their next possession and closed the gap to one touchdown with a 36-yard score. 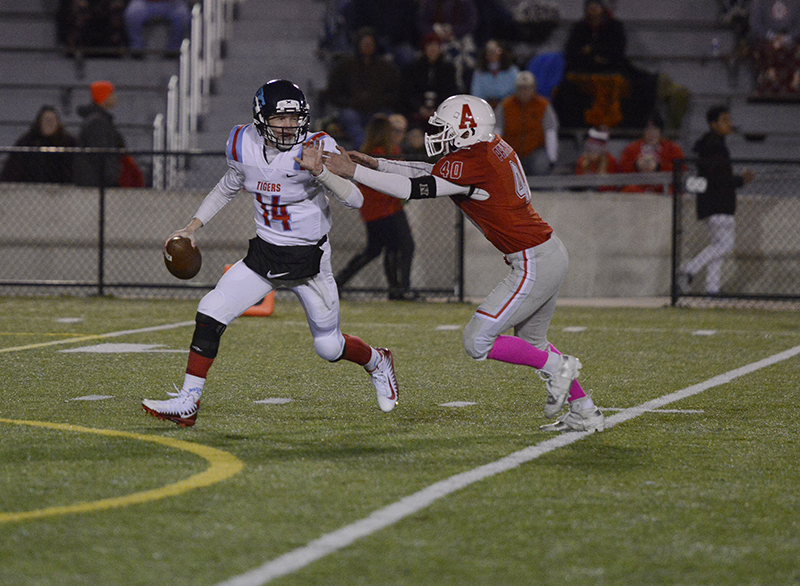 Albert Lea senior Logan Howe tries to avoid the pressure Wednesday night in Austin. Howe threw the first two touchdowns of the game to give the Tigers a 14-0 lead in the first quarter. – Tyler Julson/Albert Lea Tribune

Both teams traded punts back and forth on their next possessions, winding down the time left in the first half.

In a wild turn of events, the Tigers found themselves on the Packer 30-yard line and driving when Howe fumbled the ball on a designed run, but was picked up by an uncovered Chase Hill, who ran it in for a 20-yard score.

Entering the second half, both teams came out to stagnant offenses. Time wound off the clock, with neither the Tigers nor the Packers scoring in the quarter. However, with a 14-point lead, time was on the side of the Tigers.

Early in the fourth quarter, Albert Lea kicked a short field goal to take a 24-7 lead over Austin with just over 10 minutes to go in the game.

With the game all but over, the Tigers stopped the Packers on a crucial fourth and short to take the ball back. If that weren’t enough, the Tigers picked up a Packers fumble on their next offensive possession to put the game on ice.

Last week, the Tigers gave up 32 points on defense before allowing only seven against the Packers Wednesday night. Black talked about the biggest difference he saw in the team through the week.

“We had a little bit of a chip on our shoulder because we didn’t play very well last week against New Prague,” he said. “We came in this week with a new attitude to be more aggressive and more assertive from the start. All we gave up tonight was one play with blown coverage. It was a big confidence boost.”

The win moves the Tigers to 2-6 on the season. They will play again in the first round of the Section 1AAAA tournament against an opponent yet to be determined.