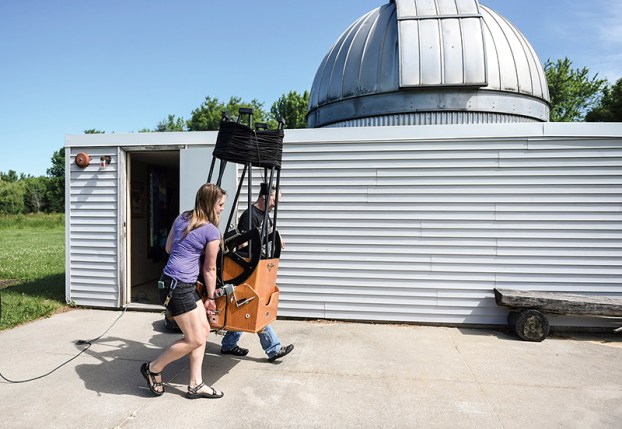 “It serves two important roles,” said Nature Center Director/Naturalist Luke Reese. “The first is it gives us a lot more capacity to do environmental education. The second thing, it gives these interns experience in a natural resources career.”

Interns over the years have been vital partners as the nature center continues to grow from where it was in 1971, the year it was established.

The reason is simple: growth requires more bodies and a prime example of that is this past year. Over 100,000 people visited the nature center in 2019. Without the addition of interns through this fundraiser, it would be hard to keep the doors open on weekends.

The interns give the nature center an educational and operational depth.

Often times, interns at the nature center can make an impression that lasts for years after they have left.

“All these interns have lasting impacts,” Reese said. “Some of our interns have had their ideas, we try them and they work.”

Programs like the Summer Senior Specials have been thought up by interns.

“Having these young interns come in and bring that youthful exuberance helps keep this place relevant and exciting,” said Julie Champlin, nature center office manager and long time employee of the nature center.

In fact, Champlin was part of the fundraiser’s beginnings in 2002. After some time of working at the nature center, then director/naturalist Larry Dolphin told Champlin that because of lack of funding, her position would be eliminated.

“I had to secure my job,” Champlin remembered. “It was just Larry and me. He told me my job was going to be done in June of that year. How was Larry going to run this place on his own?”

That’s when the fundraiser was conceived and even in its first year, she remembered it being strongly supported.

“Actually it was huge the first year,” she said. “Over 220 people the very first year at St. Edwards (Catholic Church). We probably didn’t have as many donations at that point, but it was a social event; all these people supporting the nature center don’t get to see each other that often.”

Reese said on average they are bringing in around $35,000 each year, which is just enough to fund the interns.

While the fundraiser’s base goal is to raise money to keep utilizing interns in the nature center’s day to day operations, it’s also a chance to see the work they do and hear from the interns themselves. Both Kelly Bahl and Andie Harveaux will both give testimony of their time at the nature center.

This kind of interaction makes it possible to see where their donations are going and hear about the work they do.

“It’s important for those people that they see where their dollar goes,” Champlain said.

And hopefully they will see that the money is well worth it.

“We throw lots of stuff at them,” Reese said. “We get them teaching and they work on all the other projects. It’s a different stepping stone into whatever future they choose.”

This year’s meal will include pork tenderloin donated by Hormel Foods, Corp. and apple crisp provided by Jim’s Super Fresh. There is a silent and live auction and a raffle for a diamond necklace worth $1,000. Tickets for that are $20. Another big ticket item is a dinner for eight cooked by Chef Kristine Wollner to be held at the Hormel Historic Home. The theme is The Wagon Wheel, based on a restaurant that used to be operated out of a home in Austin. There are fundraising games and Vikings tickets to be raffled off as well.

There are still tickets available for $40. They can be purchased online at www.hormelnaturecenter.org or by stopping into the Jay C. Hormel Nature Center

“I would like to give out a ‘thank-you’ to a large committee of people headed by Kurt Mueller (chairman),” Reese said. “There were many, many people that put in many, many hours.”

If you like looking at the stars, the Jay C. Hormel Nature Center has a couple chances to view the heavens.

On Nov. 9, the nature center is taking part in a statewide Star Party organized by the Bell Museum in St. Paul. The event will be from 7 to 11 p.m. at the Sola Fide Observatory.

Concordia Pickerel Lake Lutheran Church will host a soup and pie supper from 4 to 7 p.m. Wednesday. Meals will... read more