Away from Trump rally, Republicans get early start on ground effort 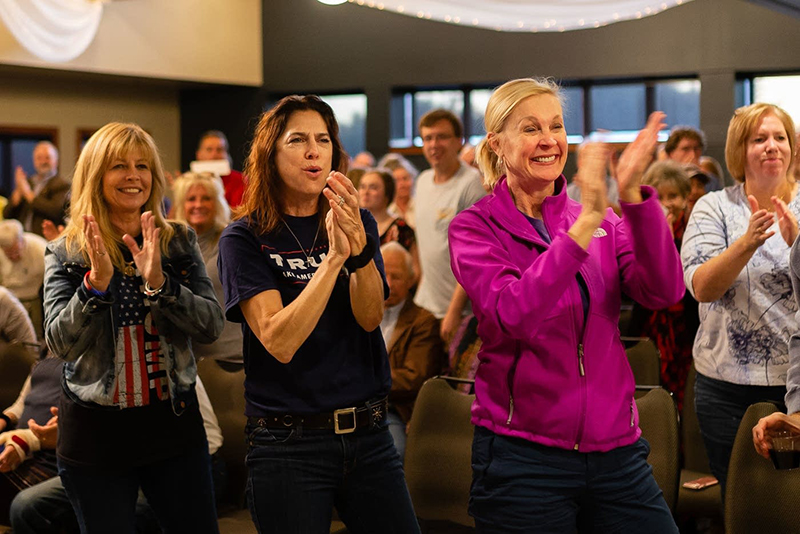 Supporters cheer for Mike Lindell as he speaks during the Trump Victory voter registration training at Greenhaven Country Club in Anoka on Monday. Kerem Yücel for MPR News

Days before President Trump was due to touch down this week to rev up his supporters at a Target Center rally, a much smaller group of devoted backers filed into a golf course ballroom.

Plenty of them wore “Make America Great Again” hats and shirts, and one woman had a red Trump 2020 sash across her torso. More than 100 volunteers-in-waiting were there for a boot camp of sorts on how they can best pitch in over the next year for Trump and how they can coax voters who aren’t on board.

“I’m ready to jump in wherever somebody needs me,” said Robin Carlson, 40, of St. Francis, Minn., ahead of the closed-door session where the agenda included training on voter registration, neighborhood organizing and phone banks.

The Trump campaign and his allies are organizing earlier and more aggressively than past Republicans in Minnesota. Trump served notice after 2016 that he’d attempt to push one of the lone Midwestern holdouts into his column in 2020.

Carlson, a military mom and caregiver for a terminally ill child, has stepped more deeply than ever into the political fray. She already spends hours a week helping run a private Facebook group for female supporters of Trump.

“I get that a lot of people may not like some of the tones or some of the words,” she said. “But he is one that fights for us.”

Trump’s team saw his narrow Minnesota loss last time — by about 44,000 votes out of almost 3 million cast — as an invitation to compete in the consistently Democratic state.

“Gut and intuition got the president within 1 1/2 points. Now we’re going to get him over the line with data-driven, strategic, political operations and plans across Minnesota,” said Republican Party Chair Jennifer Carnahan. “And not take for granted the accomplishments he’s had, the energy that he brings, the inspiration of driving people out. We’re going to make sure that that’s all there — and then some.”

Carnahan said there are 25 paid staffers connected to the Republican National Committee and the Trump campaign now, with a plan of reaching 100 next year. Some have been at it since June. They’re working to recruit and train thousands of volunteers.

It’s a far cry from 2016. Back then, Trump had virtually no formal campaign apparatus in Minnesota.

Trump himself regrets not campaigning harder in a state that hasn’t backed a Republican nominee since 1972. “One more visit, one more speech,” he lamented during a rally last year in Duluth.

The last time a Republican incumbent sought a new term, Minnesota was also in his sights.

President George W. Bush came within a whisker of winning the state in 2000 and was intent on a different outcome in 2004.

Bush visited often. The first of an eventual couple dozen Minnesota hires came aboard 15 months out. Bush still fell short when the votes were tallied, and in fact lost ground on the election before.

Four years later, Republican nominee John McCain had a burst of Minnesota activity but effectively pulled out a month before the election.

Minnesota strategist Ben Golnik ran the McCain effort. He said how Trump’s team converts the rally enthusiasm into concrete action by those who attend is key.

“If you go in thinking, gosh, any one of these people who attend this rally can give us 10 hours, 20 hours, maybe 100 hours or more over the course of the next year, that is a pretty valuable resource,” Golnik said. “These rallies do a great job in terms of motivating people but also trying to find new people who maybe never attended an event before or haven’t been politically active.”

To get rally tickets, people supply the Trump campaign with their name, cellphone number and email address.

Carnahan said that information gets plugged into party databases. The party assigns every registered voter a score. It’s based on voting history, other political activity and consumer information. All is used to judge how likely that person is to vote for Trump or be open to persuasion.

On Thursday, volunteers will also be working the lines outside Target Center to solicit future help.

Back at the Anoka training session, volunteer Peggy Chapman sat close to the front with her foot in a walking cast after breaking her leg in the spring. She’s ready to get involved, making calls or stuffing envelopes.

“I probably won’t be going door-to-door for obvious reasons,” Chapman, of nearby Ramsey, said. “Both my husband and I are retired so we’re willing to do this.”

She said the current impeachment inquiry into Trump has only strengthened her resolve to help him secure a new term.

“I hate this anti-Trump stuff everywhere you go. Hate it,” Chapman said. “Poor guy can’t even stand a chance. If they’d work with him he could do a lot more.”

Robin Carlson expresses confidence about Trump’s chances. She ignores polls and points to the president’s quiet supporters as pivotal.

“I think there’s a lot more around and they just don’t want to say too much — whether they’re just introverts and want to keep their opinion to themselves,” Carlson said. “But when they go into the voting booth, they go out and vote what they want.”