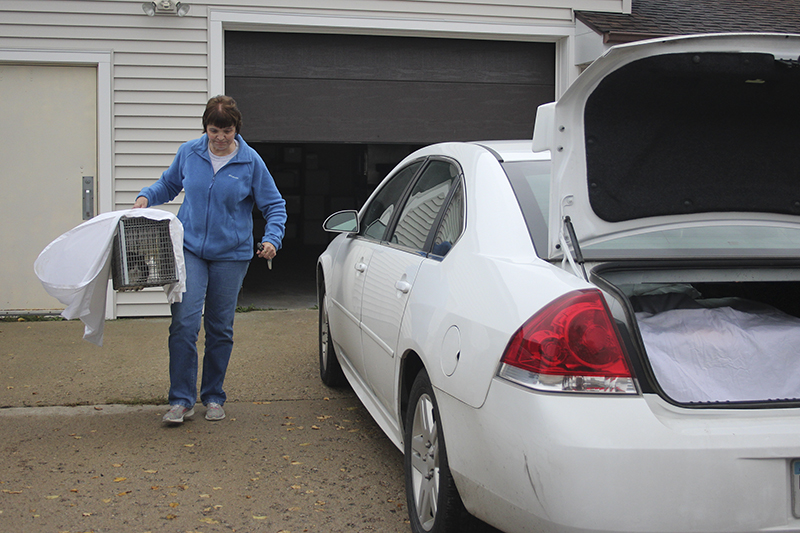 Dee Amberg prepares to transport four cats from the vet to their new home on a farm. The cats are part of 31 total cats, including 16 kittens, that have been removed from a property in south Albert Lea. Sarah Kocher/Albert Lea Tribune

The coordinator for the Freeborn County trap, neuter, return program said she has trapped her last cats for the year as the weather puts an end to her work in a mobile home community in south Albert Lea.

Dee Amberg, program coordinator and volunteer with the Freeborn County Humane Society, trapped a combined 10 adult cats in two separate visits to New Hills Condominiums, an area that drew attention from the city in August and September because of its cat population. The Albert Lea Police Department reached out to the Freeborn County Humane Society for help trapping the cats.

Five cats were relocated by the property owner, who had been feeding the cats, Amberg said. She said she has also taken 16 kittens from the property. Those kittens are in foster homes through the Humane Society. They will be vaccinated, spayed or neutered and put up for adoption, she said.

The Police Department estimate was higher, at 40 cats removed from the property as of Thursday.

According to Amberg, early bystander estimates of the number of cats in the area was high. Amberg estimated the property had under 20 adult cats.

The adult cats Amberg trapped are being placed on a farm. The cats are semi-feral, Amberg said, and therefore are not house cats. 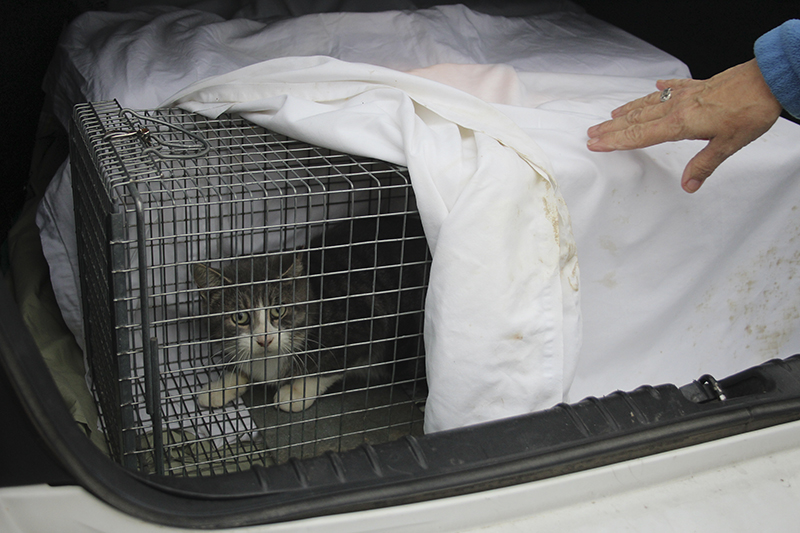 Dee Amberg puts a sheet over the cats to keep them calm and puts down her backseat so the cats receive heat in the winter, air conditioning in the summer and air flow throughout the vehicle. Amberg is head of the Freeborn County TNR program and a volunteer with the Freeborn County Humane Society. Sarah Kocher/Albert Lea Tribune

TNR done “the correct way” would mean the cats were released back to the area from which they were originally trapped, Amberg said. Neutering and spaying can stop fighting among the male cats, spraying, howling and, of course, reproduction and therefore expansion of the cat colony. The colonies are then managed at that same size.

“The removal of these cats is not necessarily the way this should have gone,” Amberg said.

“I have noticed a reduction in the number of cats when I’ve driven through there,” he said.

The Police Department’s role is to facilitate the process by getting everyone in touch with each other. They do not remove cats, Strom said. 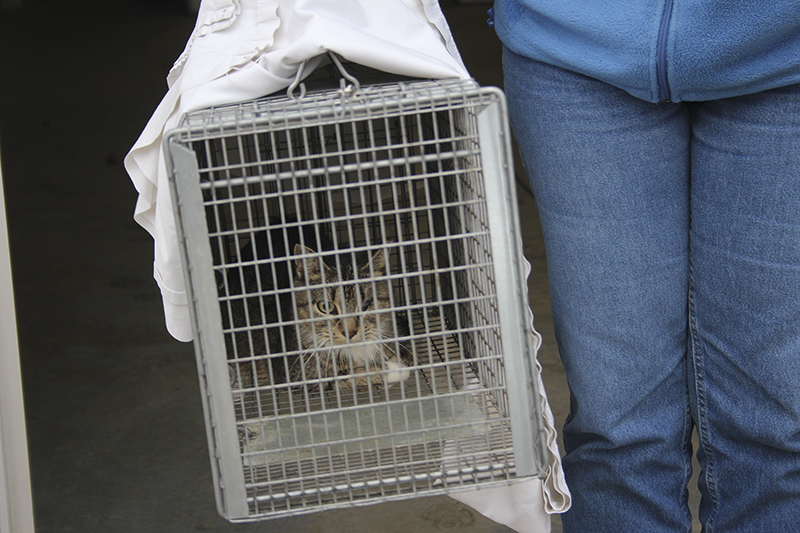 Dee Amberg trapped her last four cats from a property in the New Hills Condominium neighborhood this week. She picked them up from the vet Thursday after they had been spayed, neutered and vaccinated and took them to a farm. Sarah Kocher/Albert Lea Tribune

“My program is contingent upon the weather,” Amberg said.

She said she can take up to five cats at a time to the vet, where they are spayed, neutered and receive their vaccinations.

The Humane Society is absorbing the cost of these vet visits but receives financial help from Camp Companion in Rochester. They are charged $70 per cat by the vet, Amberg said.

Amberg hoped to complete TNR before the weather stops her this year, but will check in on the property in the spring to be sure no other cats have moved in and to potentially finish trapping, she said.