Ernest A. “Ernie” Benesh, 93, formerly a long-time resident of Owatonna, went to be with the Lord Tuesday, Sept. 17, 2019, at home in Bloomington with his daughter, Sarah, by his side. 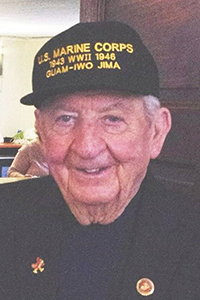 Ernie was born May 20, 1926, to James and Zdenka (Kalivoda) Benesh on their farm in Oakland Township, Freeborn County. The youngest of four boys, he attended District No. 75 country school and graduated from Albert Lea High School in 1943.

Upon graduation, just after his 17th birthday, he enlisted in the United States Marine Corps during World War II. He participated in the battles of Guam and Iwo Jima. He was discharged Feb 7, 1946, and returned home.

On Feb 10, 1948, he was united in marriage to Elaine Haroldson. After farming for a few years, they moved to Ames, Iowa, where Ernie attended Iowa State College. He graduated in 1956 with a bachelor’s degree in industrial administration.

After college, Ernie and Elaine moved to the Chicago area, where Ernie worked for Link Belt. They later moved to Wheaton, where he worked for Allis-Chalmers. In 1962 they moved to Owatonna, where Ernie was works manager for Owatonna Manufacturing Co. In 1966, Ernie started working for Pioneer Engineering Co. in Minneapolis as factory manager, building rock crushers and asphalt plants.

In 1982 he went to work for Bituma Construction Equipment Co. as an operations manager in Marquette, Iowa. He then worked for Slidell in Owatonna until his retirement in 1991. After retiring, Ernie worked for SGS Co. for eight years, inspecting shipments that were being sent overseas by companies in southern Minnesota and northern Iowa.

Ernie served on the Twin Cities Labor Management Council for 13 years, the Steele County Children and Community Service Advisory Committee for two years and was president of the Owatonna Public Utilities Commission from 1985 to 1989.

In addition, Ernie was selected to attend many engineering and management seminars and schools, such as A.O. Smith Welding Institute in Milwaukee and an IBM computer course in Endicott, New York.

Throughout his career he engineered several farm machines. He also designed a vertical auger automatic bagger for titanium dioxide, originally for Dupont Co, that is still being sold today.

Ernie and his cousins Emil Prantner and Milo Belshan were also instrumental in designing and fundraising to have a veterans memorial built in 2013 at Bohemian National Cemetery in Hayward Township. The support and finished memorial far exceeded their dreams.

Ernie enjoyed hunting, fishing, golfing, reading history, genealogy and horseback riding with his daughter when she was young.

Ernie was preceded in death by his parents; wife, Elaine, in 2004, after 56 years of marriage; and brothers and sisters-in-law Joseph Benesh, James (Irene) Benesh and Richard (Marcy) Benesh.

A memorial service will be at 11 a.m. Nov. 30 at Trinity Lutheran Church, 609 Lincoln Ave. in Owatonna. Visitation will be one hour prior to the service at the church.

Ernie generously donated his body to the Mayo Clinic Bequest Program for the purpose of medical education, research and surgical training. Therefore, burial will be at a later date at Bohemian National Cemetery in Hayward Township.

Ernie was loved by so many and will be missed by all.  Memorials are preferred to Mayo Clinic or Trinity Lutheran Church in Owatonna.