In Minnesota, 4 out of 5 gun deaths are from suicides 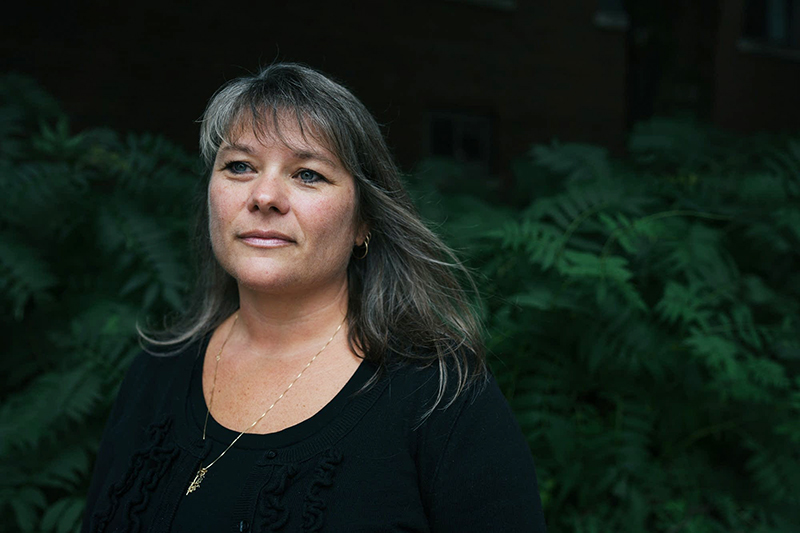 Juanita Jensen stands for a portrait at the University of Minnesota in Minneapolis. Evan Frost/MPR News

Juanita Jensen grew up in a gun family. She doesn’t hunt, but believes in the sport and is used to having guns around.

And as the parents of five children, Juanita and her husband were careful to follow all the rules for firearm safety: Keep the guns separate from the bullets. Lock up everything. Enroll their teen boys in gun-safety classes so they could learn to hunt responsibly.

But despite all of their precautions, they realized just how tough it is to keep guns away from someone who shouldn’t have one.

Most Americans are unaware that suicides — not mass shootings, other murders or accidental gun discharges — account for the majority of gun deaths in the United States, according to a recent survey from APM Research Lab. As many as three-fifths of gun deaths in the U.S. are the result of people intentionally killing themselves.

And in Minnesota, the statistics are even worse: 4 out of 5 deaths by firearms are suicides.

Four years ago, when Jensen’s second oldest was 19, he had a psychotic break and ended up in the hospital. (He didn’t want to talk to MPR News for this story and asked that we not use his name. We agreed to respect his privacy.)

The hospital kept him for three days — what’s known as a 72-hour hold — to see if he might hurt himself or somebody else. Hospital staff didn’t say anything to him or his parents about guns when they sent him home. And with the family’s emphasis on gun safety, and Jensen’s worries about their son’s health, it didn’t occur to her.

“They don’t send you home with … a packet, you know, that said, ‘Listen, the hold is over. We’re gonna discharge him. Here are some meds, just things are good,’” she said.

That was in the spring. By the beginning of the summer, Jensen’s son was worse. Her husband was so concerned that he quietly took the guns — and the ammunition — to her brother’s house in another city.

Then one night in June of 2015, one of their sons woke them up with a gun. “Please do something with this,” she says he told them. He told his parents his brother was upstairs “trying to take his life.”

The 19-year-old had gone to Walmart and bought a shotgun, they learned. His brother had found him just in time.

Seventeen states have passed red flag laws, which let families petition to have peoples’ guns taken away if there’s reason to believe that they would hurt somebody. In Minnesota, red flag bills have come up in the Legislature a few times, but none have gone through. Some states have seen a drop in suicides as a result of red flag laws.

The night he tried to kill himself, Jensen’s son ended up in the hospital and eventually was committed. That means he was under a court order to follow certain rules, including one that barred him from having firearms. In his case, it was the first time any kind of oversight about guns kicked in.

Commitments are handled at the county level; they require an elaborate set of rules that guarantee the person due process, including medical exams and a judge.

The problem is even though the statute says clearly that a person who is committed may not have guns, it doesn’t say how to get the guns away from the person. So, people like Theresa Couri, who helps handle commitments at the Hennepin County Attorney’s Office, are left trying to figure out what to do.

During the commitment process, her office sometimes finds out that the person has a gun or has access to a gun.

When that happens, Couri said, it’s important to get it away from the person. But doing that can be complicated.

“So, what my staff attorneys often do,” she said, “is contact a family member, they will contact a spouse, if it’s a young person, a roommate,” and ask them to go to the house — or wherever the weapon is — to retrieve it.

If they can’t find somebody close to the person, then attorneys call the local police and have them take the weapons.

“I don’t feel that doing nothing is appropriate, so our lawyers engage in activities that I think are consistent with the statute,” said Couri, who was not involved in the case of Jensen’s son. “The statute says a person committed is ineligible [to have a gun]. If we know there’s a gun, we should be taking some action, in concert with law enforcement, to do our best to effect that part of the statute.”

The other thing that happens when a person is committed, whether they are known to have access to a gun or not, is that the person’s name gets reported to the FBI. It’s then added to a confidential list that licensed gun dealers have to check before they sell somebody a gun.

Who can buy a gun?

Kory Krause, who owns the Frontiersman Sports gun shop in St. Louis Park, said would-be gun buyers are required to fill out a form that asks for the person’s identifying information. It seeks not just the basics like name, birth date and address, but also things like height, weight and race. And it includes a checklist of potential disqualifiers, including whether the person has been convicted of a felony or committed to a “mental institution.”

The gun shop submits the form to the FBI, which then has three days to respond, either giving permission for the person to buy, denying it, or asking for more time. The list is confidential so when a person is denied, neither the seller nor the buyer are told why. Krause said it’s rare that a person who knows he’ll be denied bothers to try buying a gun.

What does happen, though, is people who want to hurt themselves will occasionally come in to buy a weapon. And if they’re not on the list, then it’s up to Krause and his employees to recognize the potential danger and stop the sale.

Krause said he’s never gotten any official training to identify somebody in a mental health crisis, and that he and his employees rely on experience and intuition. They might get suspicious if, say, an old man comes in and wants a revolver and only one or two bullets, or if the person physically can’t operate the gun.

He said if he thinks a person might try to hurt himself, he’ll refuse to sell and call the police to check on the person. But he knows a person who is suicidal will at times slip through.

“We know that when they walk out that door, what they do with it could be good or bad,” he said. “It’s an unfortunate component of the business.”

There are other loopholes or gaps that let people get guns when they shouldn’t, including private sales, which aren’t subject to background checks.

Juanita Jensen’s son is doing better, following the rules of his treatment and living on his own. He could eventually petition the state to be allowed to have guns again.

This reporting is part of Call to Mind, an MPR initiative to foster new conversations about mental health.