John Robert Ellens passed away Sunday, Sept. 29, 2019, at the age of 74 at his daughter’s home in South Carolina after recently being diagnosed with cancer. 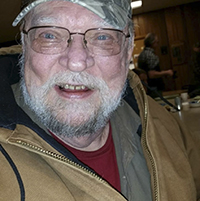 During his life, John was interested in all things outdoors and was an Eagle Scout. He was happiest when he was camping and fishing. He graduated from the University of Kentucky in 1967 with a degree in dairy science from the College of Agriculture.

John is survived by his three children, John “Andrew” Ellens of Watertown, Wisconsin, Erin Courtney (nee Ellens) of Summerville, South Carolina, and Daniel Corbett Ellens of Covington. Lousiana. His oldest son, Andrew, has special needs that John ensured were met throughout his life, despite their geographic distance; maintaining a close relationship, providing oversight and security, yet allowing for as much independence as possible for Andrew. John also has four grandchildren: Marisa Courtney, James E. Courtney and John R. Courtney of Summerville and Braeden D. Ellens of Covington. John enjoyed vacations with his children and grandchildren.

John was an ardent member of Alcoholics Anonymous and maintained sobriety for the last 28 years of his life, an accomplishment of which he was very proud. John often reached out to help others who were struggling with addiction, believing it to be an integral part of his own sobriety. He did achieve peace in his life through Alcoholics Anonymous.

In lieu of flowers, memorials in his name are preferred to the United Way of Freeborn Country, as John loved living in Albert Lea.