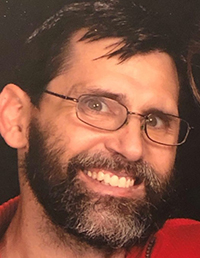 Kevin Christopher Johnston, 47, died in his home surrounded by family and friends after battling multiple sclerosis for 30 years.

Kevin was born April 1, 1972, in Huntingdon, Tennessee, to Jim and Shiela Johnston. He grew up living in different places, including Goldsboro, North Carolina, Minot, North Dakota, and Morristown, Tennessee, while his dad was in the Air Force. He graduated from Morristown West in 1990 and Carson Newman College in 1994. He grew up playing lots of sports, including his favorite — soccer. He played on a Minot soccer team that won the state championship. He also played soccer for Morristown West and Carson Newman.

In August 1993, on a blind date, he met the love of his life and wife of 24 years, Angie Knutson, from Albert Lea.

Kevin and Angie were married Aug. 5, 1995. That same year he began the physical therapist assistant program at Walters State. Kevin worked as a physical therapy assistant for many years. He loved his job because it was a great joy to help others.

Kevin and Angie are blessed with three children: Joshua, Christabelle and Gabrielle. Despite his diagnosis, Kevin continued to enjoy many things with his family and friends, including hanging out and talking with his wife and children, hiking, dancing, fishing, golfing, swimming, hunting with his son, helping those in need; playing, watching and coaching soccer; catching snakes,  watching sports, being a Boy Scouts leader, camping, going to the beach, going to Christian concerts, going to Christian camps, going to church most Sundays and Wednesdays, serving in the children’s church ministries, acting, going to and helping at the Crockett Tavern Museum, helping with leader’s children at American Heritage Girls, going on father/daughter and father/son camping retreats, going to Dollywood; fellowshipping with his family and friends everywhere he went, including at home, church, Camp Bethel, Luke 14, Camp Celebrate, etc.; going to Minnesota to see family and friends, going to and telling people about the Creation Museum and The Ark Encounter, going to Smokies baseball games, reading to and with his family, playing in the snow, playing with his dogs and kiddos in the yard, playing games, etc. Kevin loved life and enjoyed people.

Kevin is survived by his wife, Angie; their children Joshua, Christabelle and Gabrielle; father, Jim (Anne) Johnston; sister, Heather (Paris) Clabough, and her children Nathan and Abby; aunt, Shirley (Bill) Paris; aunt, Sharon Haag; cousins Amy, Michael, Kristen, Ariane and Micah; Angie’s family, who loved him as their own: father and mother-in-law Cobb (Margaret) Knutson; mother and father-in-law Kathy (Hans) Karrais; sister-in-law, Amy (Chad) Vogt and their children Ben and Emma; sister-in-law, Amber (Scott) Gray, and their children Chelsea and Devin; aunt Barbara Osmundson; many other precious family and friends; Camp Bethel family; Camp Celebrate family, church families, homeschool coop family, AHG family, soccer family and others. He loved you all and was thankful for each of you!

A receiving of friends took place from 4 to 7 p.m. Oct. 3 at Manley Baptist Church and was followed with a celebration of life at 7 p.m.

A visitation with family and friends will take place from 10 to 11 a.m. Saturday at First Presbyterian Church in Albert Lea.  A celebration of life will follow at 11 a.m. at the church.

Arrangements are by Westside Chapel Funeral Home in Morristown, Tennessee.