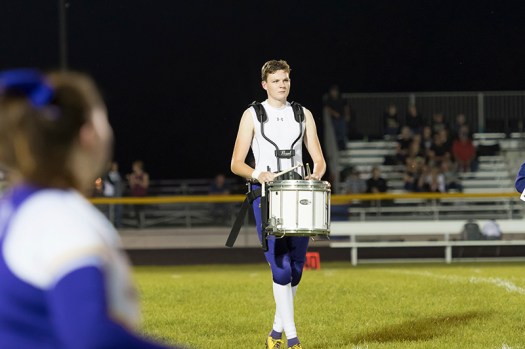 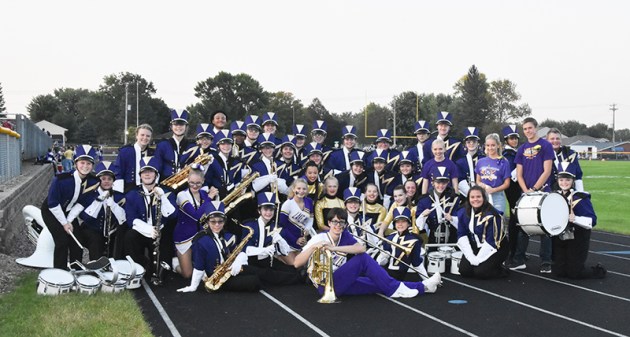 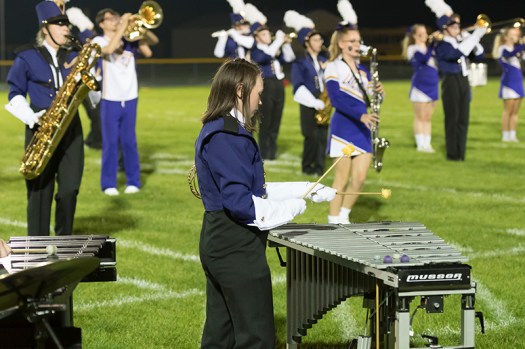 The Lake Mills Marching Band allows for those in sports, cheerleading and other extracurricular activities, even if it means not wearing the proper uniform for the game as every person is considered a crucial member of the band. - Lory Groe/For the Albert Lea Tribune 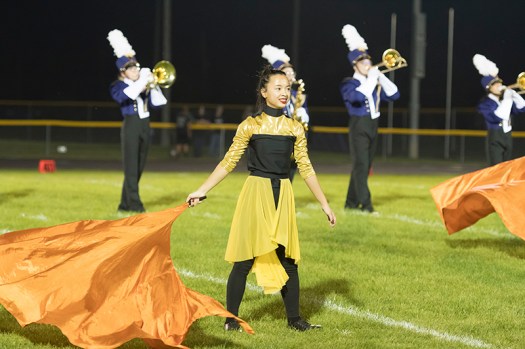 LAKE MILLS — For the Lake Mills marching band, winning awards is part of carrying on a long-standing tradition at the school, which started over two decades ago. This year’s band kept the tradition alive, receiving first place in the Class 2A bands category and taking home Best Color Guard and Best Marching and Maneuvering awards Oct. 5 at the Algona Band Day in Algona, Iowa. The band also received a Division 1 rating Saturday at the Iowa High School Music Association State Marching Band Contest in Fort Dodge, Iowa.

The winning of the awards was no surprise to those familiar with the program. The school district has earned the Meredith Willson Grand Champion Award for the North Iowa Band Festival for five years in a row and earned a first-place finish in Class 2A for 15 consecutive years.

So what’s their secret to success?

Band director Nate Sletten, who learned to play saxophone in the same classroom he now teaches in, has a theory on that.

“The band directors held high expectations for students and had a lot of energy,” he said, noting the tradition of having a high-quality marching band started with his former teacher, Frank Dahn, and has continued through others who have taken their turns at the director’s helm before he assumed the position over two years ago. “I think that one of the other things that makes us so successful is we’ve had so much community support.”

Sletten said small towns can become so sports dominated that other programs suffer as a result, but that’s not the case with Lake Mills.

“The nice part is that we all as coaches and teachers work together to make sure we’re providing our students with multiple opportunities for co-curricular and extracurricular activities,” he said. “I know that sometimes you can get kind of pigeonholed at smaller school districts where that’s it. You can only be in this or you can only be in that.”

Lake Mills is unique in the way that coaches, directors and teachers work together to try to optimize how many opportunities their students have. A football player can come off the field and discard his pads and pick up an instrument and play during the school’s halftime performance without fear of upsetting the coach that he is not in the locker room. Cheerleaders trade in their pom poms for instruments and make their way out onto the field, as well.

“I think that’s one of the reasons that it makes us really successful, too — because we see the importance in all those activities,” Sletten said. “I think the kids really appreciate that.”

Sletten also gives credit to Kehan Knapp, another Lake Mills alumni who has consistently been a part of the program since the mid-1980s.

As a result, Knapp was exposed to some of the top visual designers in the field at the time — and he absorbed everything he could from them. Knapp started to use his knowledge while he was in high school to help the Lake Mills marching band improve, though he does admit that it was a lot of trial and error in the beginning.

Knapp, who lives in Spring Valley, now works as a visual designer for 11 different schools across the country, judges contests throughout the nation and works with clinics to help others improve their skills.

He describes his work as “a creative combination of drafting and animation.” Some schools hire him to create their drills and have their own staff fine tune the routines. Knapp is much more involved in Lake Mills.

Knapp said he works as a team with Sletten; Sletten’s wife, Mindy, who directs the flag corps; and choreographer Sydney Truhan, who is a student at North Central College in Illinois.

“Mindy is very much involved in this,” Knapp said, noting that many times she is the glue that helps hold everything together.

The Slettens and Knapp get together before the start of the season and decide on a theme, as well as the musical piece they want to use. This year’s theme is “Rise Above” and the musical piece is “Phoenix Rising” by Randal Standridge.

After making this decision, Knapp and Truhan work together to bring the music to visual life to tell a story.

The story is the why that Sletten uses to inspire his students.

Through personal struggles, people face challenges in their lives. They survive the battle, but sometimes a part of themselves dies in the process. Then, the tides turn, people can learn from a failure or bad experience and overcome — becoming even stronger than they once were. Like a phoenix, they rise from the ashes, he said.

“There’s a lot of times it just sounds like they’re just playing notes on a page or just going through the motions in the morning and then we’ll stop rehearsal,” Sletten said. “We’ll powwow, and everyone will come up around me and we’ll talk about our why. We’ll talk about that overcoming.”

“Nate is one of the best music educators I’ve ever worked with,” Knapp said, noting Sletten makes music more than playing notes from a piece of paper and that’s what it’s all about. “He’s more than a music educator. He’s a life educator.

“It’s bigger than the sum of all its parts.”

Sletten said his philosophy of music education is to teach students life through music.

“You’re willing to learn from failure,” he said. “You’re going to push yourself to become better always learning. Students come first. There are always things that happen or setbacks, but students need to know they come first.”

Not only do students come first, but every student matters.

“That’s one of the things we talk a lot about is we’re about one of the largest varsity teams out there, and it is a co-curricular activity,” Sletten said. “We can’t bench anybody, so you take the good, the bad and the ugly, and you put it out on the field and that’s why we talk about it all the time with students is every single person is important. I think that’s a unique activity. There’s not many things around the school district that are like that. Every single person has to give 110% because otherwise that one person can be out of step. Every single person is important.”

“This group of younger students is so excited about what they are doing that I think it’s ramped up our level of achievement even more because it’s pushed some of those leaders, too,” he said. “It’s pretty exciting to watch.”

The band cannot do it on their own, though.

“We have an army of parents that help us carry stuff from the trailer to the sidelines,” Sletten said, noting many others who have contributed to the marching band’s success, like Brad Evenson.

“He built three carts for us that are nicer than things you can buy but he’s invested himself in our trailer and how we get things out onto the field so our students can be more successful but his name is not listed on the program.”

“It doesn’t happen with just a few people,” Sletten said.