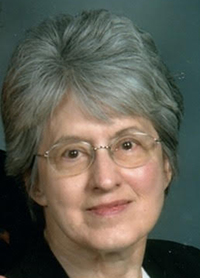 She was born Aug. 2, 1936, in Dodge Center to Leonard and Maude Mueller of Sargeant and graduated from Hayfield High School.

LaVay was a church organist for a period of time at First Presbyterian Church in Hayfield. She attended classes at Macalester College in St. Paul and was a secretary on an Intercontinental Ballistic Missile program at Martin Aircraft in Denver, where she met her future husband, John Sutterfield.

He was an Airman stationed at Lowry Air Force Base in Denver. The couple married in 1960 in Hayfield and settled in Rochester. In 1965 they moved to Albert Lea and in 1976 they moved to Litchfield. LaVay worked for the Department of Social Services in Freeborn and later Meeker counties in Minnesota and eventually retired from that career. The Sutterfields later lived for a time in Sauk Rapids and then St. Cloud before living their final days in Sartell.

LaVay was a friend to all and delighted in the Lord, serving and worshipping him while serving others all the days of her life.

LaVay is survived by her son, Jon Sutterfield, U.S. Air Force (retired) and his wife, Sherri, who live in Shawnee, Oklahoma, and her daughter, Vicki Marie Sutterfield, of Lakeville. LaVay is also survived by her grandchildren Jacob of Minneapolis, Brandon Sala of Shawnee and Stephanie Hill of Stratford, Oklahoma. She has one great-grandchild, Zayden Sala, of Shawnee.

LaVay was preceded in death by her parents; husband, John Thomas Sutterfield; and brother, Harold Mueller, and his wife, Twylah (Hegna) Mueller.

Visitation will be from 10 to 11 a.m. Wednesday at Czaplewski Family Funeral Home, 501 Second St. NW in Hayfield, with the funeral service at 11 a.m. Interment will be in Fairview Cemetery in Hayfield.

To share a special memory or condolence, visit www.czaplewskifuneralhomes.com.