An Albert Lea man on Monday pleaded guilty in Freeborn County District Court to one count of first-degree arson for allegedly setting a local automotive business building on fire in early January. 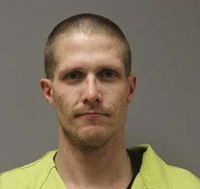 Casey Jo Eggum, 33, entered the plea as part of an agreement with the Freeborn County prosecutors in exchange for dismissing other charges against him in four files at his sentencing, including another count of arson, along with charges of burglary, felony theft, criminal damage to property, receiving stolen property, unauthorized use of a motor vehicle, possession of stolen property, possession of burglary tools and fifth-degree possession of a controlled substance.

Assistant Freeborn County Attorney Abigail Lambert said Eggum’s presumptive sentence will be 41 to 57 months in prison because of the severity level of the offense. The agreement calls for Eggum to pay restitution on all of the files, even those that are expected to be dismissed.

Lambert said she will argue for prison time at the sentencing hearing, though it is anticipated the defense will request a departure from the presumptive sentence.

The fire took place Jan. 2 at Mason Auto Sales, 86974 Freeborn County Road 46. One person lived in the top level of the building but was not inside when a deputy arrived.

Lambert said that person was displaced from her home for several months, and at least $166,000 in damage was reported.

Eggum said he and co-defendants Jessica Mulholland, Destiny Turvold and Jamie Kujak had gone to the business to steal vehicles and a safe with vehicle titles.

He said he wanted to cover his fingerprints and any evidence he left behind and looked for bleach but could not find any. Instead, he grabbed a gas can from the business, covered the desk area with gasoline where he took the titles and keys from and then ultimately used a torch to light the gasoline on fire. It caused an explosion that knocked him back, Lambert said Eggum testified to on Monday.

Eggum, who has been in the Freeborn County jail since March 10, is expected to be sentenced Dec. 17.

Kujak pleaded guilty to unauthorized use of a motor vehicle and is slated to be sentenced Nov. 22.

Turvold is slated for a jury trial Feb. 18, and Mulholland is scheduled for a settlement conference Jan. 2.