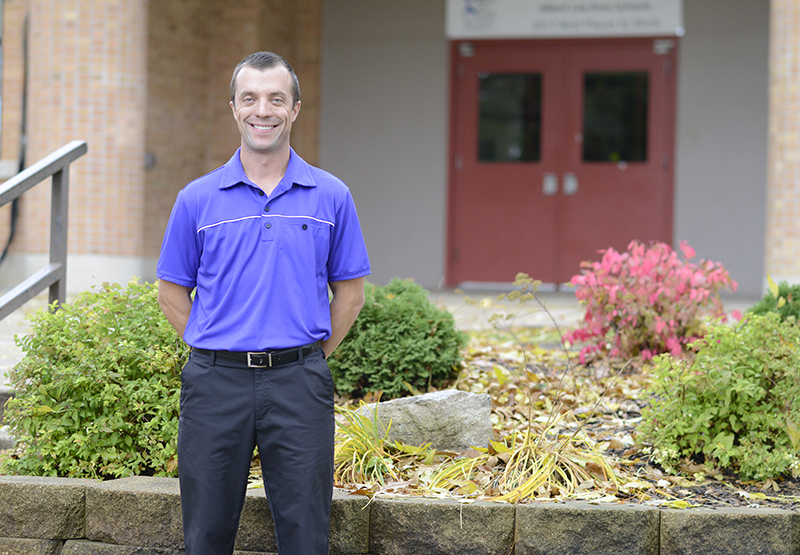 Albert Lea physical education teacher Jeff Groth will take over as the new varsity boys’ golf head coach when the team hits the course this spring. It will be his first time as a varsity head coach. - Tyler Julson/Albert Lea Tribune

The Albert Lea boys’ golf team will have a new leader this spring as Jeff Groth takes over in his first varsity head coaching gig.

Groth, a physical education teacher at Hawthorne Elementary School , has been on the golf course ever since he was a young boy. Starting out playing on a nine-hole course in his hometown of Richfield, Groth quickly moved up to caddying at a prestigious course in Minneapolis, where he spent 23 summers learning the ins and outs of the game.

Groth is entering his fifth year of teaching in Albert Lea and, although this will be his first time at the helm of a varsity team, he has a few years of experience as an assistant and at the younger levels. Groth has been coaching football anywhere from seventh to ninth grade for four years and has been the assistant tennis coach for four years.

Groth said he learned of the job opening when current head boys’ tennis coach Neil Chalmers told him about it.

“He knew how much I loved golf,” Groth said. “He said, ‘As much as I would hate to see you go, I know that’s your passion.’ So I applied and got offered the job, and it was a blessing because I really do have a passion for golf. I enjoyed tennis and I loved working with Neil. He’s a great leader and a great example of what a head coach should be, so I learned a lot of stuff from him.”

Despite not knowing for sure who will be on the team until the season starts after a long winter, Groth said based on previous seasons’ rosters, he already knows a handful of the athletes fairly well.

With the baseline knowledge of who his players are and already having developed relationships with those players, Groth said the toughest part about being the head coach is going to be time management. He said adding in practice plans to his schedule during the season on top of his lesson plans will be a shift. However, he said he has a pretty good grasp of how he wants to approach the season based on past experience with the game.

Activities Director Paul Durbahn said he is confident Groth will be a nice addition to the Albert Lea athletic department.

“We’re excited to get him into a head coaching position, as he has always had a positive impact on students,” Durbahn said. “He has all the qualities we need for a great coach. He’s a teacher in the community, he has a depth of knowledge and experience with golf, he has coaching experience in a number of activities. In addition to all those things, I’m confident he’ll work well with our community golf courses and be an advocate for the sport in Albert Lea.

“He is genuinely a good person and we’re confident the kids and families will respond well to him as their coach.”

Groth said he hopes to build the program from the ground up starting in the youth levels. He said both courses in Albert Lea have fantastic junior programs and he wants to be there, working with the children in those programs and developing coach/athlete relationships from a young age. Developing a good relationship is the key to coaching, according to Groth.

Interesting fact: along with his father, Groth has been to 23 of the 30 Major League Baseball parks