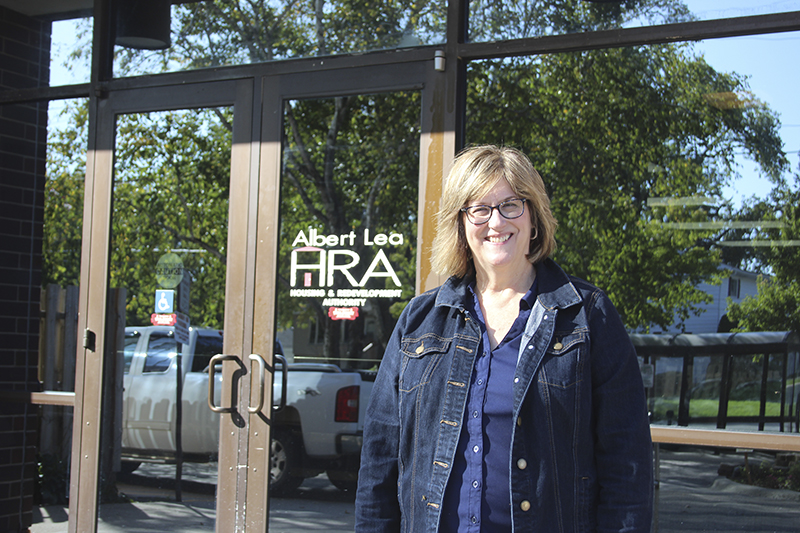 Albert Lea’s new Housing and Redevelopment Authority executive director is in the process of making Albert Lea not just a home for others, but for herself as well.

“Whenever (my husband) Chuck and I have traveled, we’ve always traveled a lot to Minnesota,” Jeanne Leick said.

They would stop in Albert Lea on a journey further north. But when the job opening came across her desk, the Nebraska native was not ready to leave Hall County Housing Authority in Grand Island. She worked there for over nine years, and prior to that, for about seven years with Gothenburg Housing Authority, both in Nebraska.

“I thought that this would be a good opportunity to get my name in the pool,” Leick said.

Then she got it.

“We decided, you know, what the heck,” she said. Why not come now?”

The two had always loved Minnesota, and her husband wanted to live in a smaller community.

“Chuck and I joke that this is our adventure,” Leick said.

Her start in public housing work was similarly adventurous. Leick began straight at the top, entering the Gothenburg Housing Authority as executive director after she said she became bored with her work for the city of Gothenburg. She had children still at home, and she didn’t want to have to drive for work, she said.

“I decided to get into housing,” she said.

Leick stayed because she said she likes housing authorities can be a place where the elderly can live on their own but still be a part of a community, she said. She thinks of her grandmother.

“I thought, ‘Oh, she would have loved to be in a community of people,’” she said.

She has already started initiating changes at the HRA in Albert Lea and has plans for more, Leick said. The software used in Albert Lea is the same software she worked with in Grand Island, she said, and is not being used to its full capacity. She is in the process of ensuring the software system is utilized more, and the HRA is now doing processes and procedures differently for people as they come in, Leick said.

She said she is also working with the Department of Housing and Urban Development to bring necessary items into compliance and be sure HUD has everything it needs.

The HRA is trying to make things more efficient for its tenants, Leick said. Packages that came for residents were previously only available during office hours, but Leick said the system was changed so residents could access their packages outside of office hours.

Finally, Leick said she would like to have relationships with more community organizations so she can refer tenants to places where they can receive the help they may need.

“I think that’s a big thing,” she said. “You want people to be successful, and how do we help them be successful and still maintain their housing?”

Leick is also interested in doing more development. She sees what is an obvious need for more housing — she said she saw it firsthand when looking for a place to live for herself — and for more affordable housing.

She started her career working for Southwest Public Power District in Palisade, Nebraska, where she worked for 16 years. Leick has a degree in business administration.

She and her husband like to canoe and ride their bicycles.

“We come to Minnesota to hike and to paddle,” she said.

And at work, she came to help people find an experience she would have wanted for her grandmother.

“I just like to help people, and I know that I’m making a difference in the community,” Leick said. “It’s something that’s needed.”

Interesting fact: Leick is a quilter and would like to pick the hobby back up. She also loves to snowshoe.