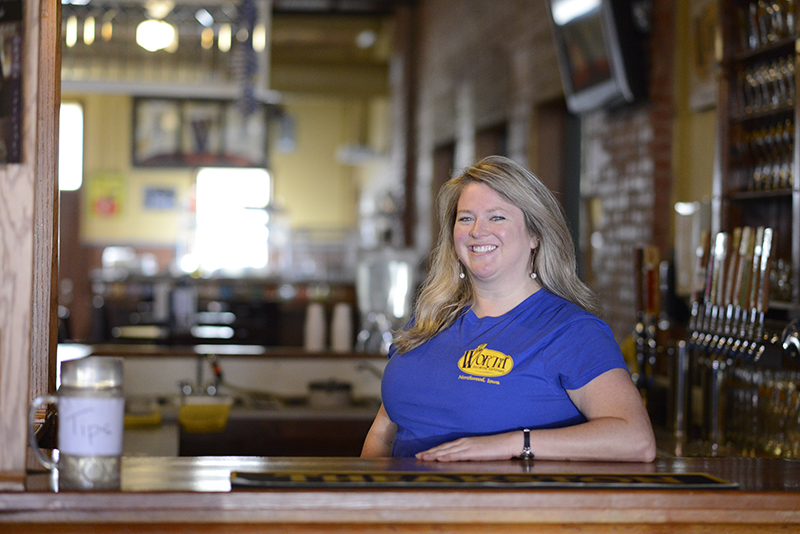 Ingrid Knutson has been the taproom manager at Worth Brewing Co. for almost one year. On top of her normal duties, she has implemented many of her ideas into the company, including beer yoga, themed trivia nights and an online calendar system. - Tyler Julson/Albert Lea Tribune

NORTHWOOD — After moving to Northwood almost one year ago, Ingrid Knutson started working as a bartender at Worth Brewing Co. and quickly moved up into the role of taproom manager.

Originally from Minneapolis, Knutson has lived in many different places, but most recently called San Diego home before moving back to the Midwest. Despite coming from the west coast, Knutson has deep ties to the Northwood area. Both Knutson’s father and grandfather grew up in Northwood, and her great-great-great-grandparents were the first settlers of Worth County.

As a frequent customer at the brewery when she was visiting Northwood, Knutson knew Peter Ausenhus, Worth Brewing’s owner and operator, well when she moved back and saw a job at the brewery as a good way to get to know some new people.

“I first came to the brewery back in 2008,” Knutson said. “I’ve always been coming here every time I’d visit. I’ve known Peter a while and I was looking for a job and I thought this would be a great way to get to know people. I had never worked at a brewery, I have never been a bartender. I had been a server before, but never a bartender and I just jumped right in.”

After working as a bartender for a short time, Knutson was approached by Ausenhus about becoming the taproom manager, a position that had been empty for nearly a year. Knutson accepted and quickly implemented a few of her ideas to the brewery. Behind the scenes, Knutson set up an online calendar to coordinate staff schedules, ballroom rentals, special events and Mug Club members. She also set up new events such as beer yoga and a themed trivia night to coincide with the traditional trivia nights. Knutson also manages the staff, event coordinating, social media, merchandise, the website and represents the company at beer festivals and tastings.

Coming from California, Knutson said one of the most difficult parts of the job is trying to take some of the events she learned about out West and tailor them to the Midwest demographic and attract new customers.

“There are so many different ideas that we have,” Knutson said. “Actually making it happen within a budget and creating an event that will attract people to come to Northwood, that is the hardest thing in terms of thinking in that box.”

Knutson said her time at the brewery so far has been a fantastic experience. She has gotten a lot of positive feedback from the new events she has started.

“The beer yoga, it’s not just yoga, it’s a social setting,” Knutson said. “We’ve had new people come every single time and everybody enjoyed it. Some people hadn’t been here in a long time and were reintroduced. That and the positive feedback I’ve gotten from taking over trivia, and I love trivia so it’s really fun for me.