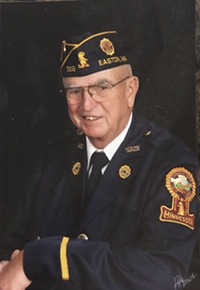 A Mass of Christian burial will be at 11 a.m. Monday at St. Peter and Paul Catholic Church in Blue Earth. The Rev. Brian Mulligan will officiate. Visitation will be from 2 to p.m. Sunday at Bruss-Heitner Funeral Home in Wells. Visitation will continue one hour prior to the service Monday at the church in Blue Earth. Burial will be in Our Lady of Mount Carmel Catholic Cemetery with military honors accorded by Easton American Legion Post 569. Bruss-Heitner Funeral Home in Wells is in charge of arrangements. Visit brussheitner.com to leave online condolences for the family.

Tom served in the U. S. Army from 1953 to 1955 and upon his honorable discharge from the Army, he came back to the family farm and operated it until his retirement in 1994. Since farmers never really retire, Tom enjoyed helping his brothers and nephews in their farming operations.

In his younger years, Tom enjoyed fox and deer hunting and through the years he loved watching and being active in all of his nieces’ and nephew’s activities. He loved to travel and made 10 trips to Hawaii through the years. He earned an award for 50 years spent at the Minnesota State Fair working admissions. Tom was an avid Minnesota Twins and Minnesota Vikings fan and enjoyed a good card game and playing bingo. Tom was a member and past commander of Easton American Legion Post 569, and also a member of the Albert Lea Elks Lodge. Tom was active with the American Legion Boys State Convention at the State Capitol, driving them and ensuring that local young men had a positive experience with how government works.

Tom was a faithful member of Our Lady of Mount Carmel Catholic Church in Easton, and when he moved to Blue Earth, transferred his membership to St. Peter and Paul Catholic Church. He is beloved by his family and every family should be blessed to have an Uncle Tom.

Tom is survived by his siblings Emmet (wife, Mary) of Ames, Iowa; sisters Mary Owen of Mankato, Irene Mikkalson of Burnsville and Alice (Lawrence) Killion of Mankato; sisters-in-law Margaret Stevermer of Easton and Cathy Stevermer of Blue Earth; along with many nieces, nephews and their families, and a host of cousins and friends.

He is preceded in death by his parents; brothers Ray and William Stevermer; infant brother, Paul; and brother-in-law, Gerald Mikkalson.