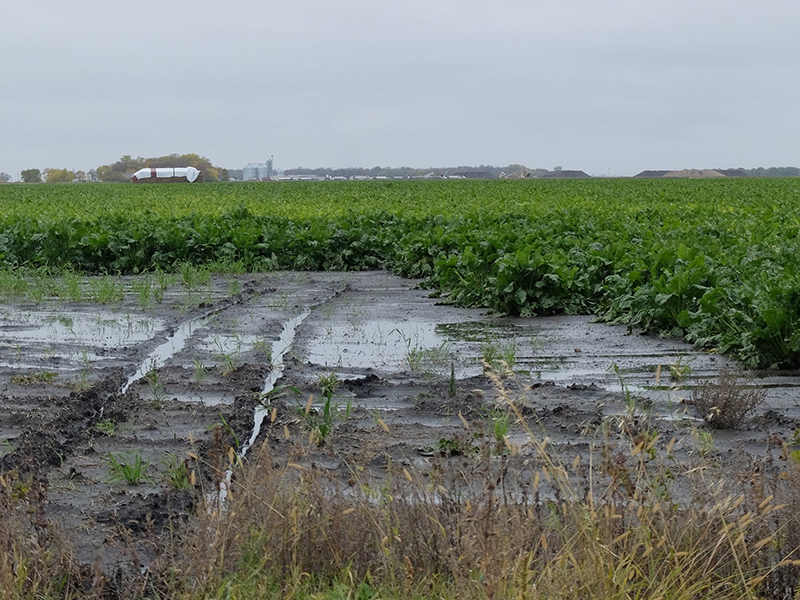 Saturated soil is delaying the fall harvest for many farmers. This sugar beet field near Stephen is seen on Oct. 9. More than an inch of additional rain fell after the photo was taken. - Dan Gunderson/MPR News

“There’s just been drizzle and everything else for so long it’s just … It’s horrible,” Jensen said last week, sitting out another damp day in the office of her farm near Stephen.

Wet conditions delayed spring planting this year across Minnesota, and soggy soil has harvest on hold in many areas this fall.

Jensen and her husband, Brian, have harvested their canola and wheat crops, but muddy fields have prevented their soybean harvest and delayed the sugar beets.

The weekly USDA crop report shows the soybean harvest in Minnesota is 16 days behind average and the sugar beet harvest is trailing a typical harvest by 10 days.

Sugar beets are the Jensens’ focus right now — they need to be harvested before the ground freezes and locks them in. Soybeans can be harvested after the freeze, as long as they aren’t covered by snow. Ideally, they’re left to dry in the field before they’re harvested, but they can be harvested wet and dried out later. It just takes more time — and more expense.

“The soybeans are probably going to be okay. I mean, not ideal — they’re probably a little wet. They’re not gonna dry down, but it can be done if we have to,” said Jensen. “We just won’t ever brag about this year to our grandkids, that’s for sure.”

There’s been some good news. Soybean prices are rising, on the word that China — the key market for Minnesota soybeans — will buy more beans. An ongoing trade war has cut soybean sales to China.

Jensen’s corn crop is also still standing. The only corn harvesting so far is being done by a black bear who is spending the fall in one of the Jensens’ fields.

Corn could be harvested after the ground freezes, or even remain standing through winter and be harvested next spring, but research shows the crop quality will suffer and yields will be reduced.

But Jensen says the weather keeps cracking her optimist shell. She worries the soybeans might not get harvested this year, if the ground stays wet until heavy snow blankets the crop for the winter.

“That is when you collect crop insurance,” she said, “and that is when the tears start to flow.”

Crop insurance covers about 70 percent of a farmer’s costs. Jensen opens her laptop and looks up the cost of growing an acre of soybeans.

“So if you thought you were going to have, for example, $350 of revenue, now you’re getting — Is that right? Geez, I don’t want to do that math.” Jensen said, shaking her head. “Now, you’re getting $245 of revenue. If you’re collecting crop insurance, you’re guaranteeing yourself a loss.”

In Marshall County, where the Jensens farm, a federal payment meant to offset the effect of ongoing trade disputes comes in at $43 per acre, and would make up some of the loss if soybeans can’t be harvested.

Still, if crops are left in the field, this farm and many others will need to refinance the loan they used to plant this year’s crop, Jensen said. In a typical year, a farmer takes out a loan to pay for seeds, fertilizer and supplies ahead of planting. And in a good year, that loan gets paid off after harvest.

But refinancing one year’s debt, spreading it out over five years, sets farm finances back five years.

“Yeah, we might have to refinance. But I’m not going to worry about that right now. It’s going to be fine. We’re going to get the beans harvested, the corn harvested, the sugar beets. I’m trying to be optimistic,” said Jensen with a laugh.

Many farms in the Red River Valley are more diversified than in other parts of the state, where the primary crops are corn and soybeans. Jensen believes planting a variety of crops helps spread the financial risk, especially in a bad year.

Even though farmers accept risk every time they plant a crop, said Jensen,  in years like this one, the risk can be suffocating.

“The stress is — it is unbearable at times. You know, not sleeping, maybe nauseous to the stomach. You get that pit in you stomach sometimes, you think, ‘Are we going to be able to do this?’” she said. “So every once in a while, you’ve kind of got to step back and think, ‘Is the value of your life solely dependent on what happens with this crop?’ And it’s not, but sometimes you gotta take a step back and think about that.”

Jensen thinks about finances a lot, particularly in tough years like this. In addition to managing the finances for the operation she runs with her husband, she is a farm management instructor at Northland Community and Technical College. She works with about four dozen farmers. Some are doing well financially, and others are struggling to keep their farms from going under.

This year, she’s worrying about them, too.

“I have been trying to check in with some of my farmers that I worry about,” she said. “You do absorb some of their stress, too. It’s just what happens. Their stress does become your stress. It shouldn’t. We should be able to separate ourselves, but that’s not how it works.”

Jensen said she encourages the farmers she works with to reach out for help from mental health programs available through the state agriculture department or the University of Minnesota.

She knows the farm stress will grow or ease depending on the weather over the next few weeks. They need a stretch of warm, dry days. In Stephen, forecasters are calling for rain — again — on Sunday.