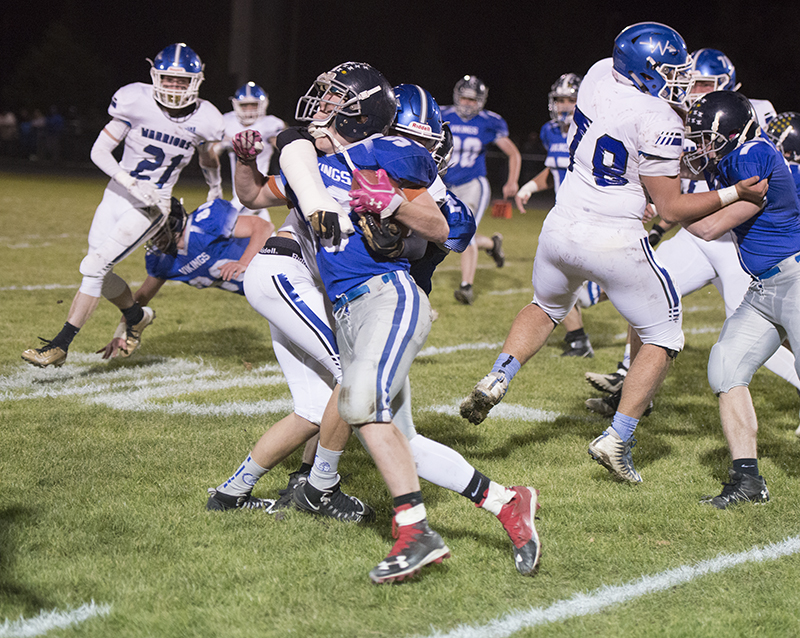 Northwood-Kensett junior Brandon Varner runs the ball early in the game against Rockford Friday night. Varner ran for 134 yards and a touchdown in the 44-12 loss. - Tyler Julson/Albert Lea Tribune

The Northwood-Kensett football team hosted Rockford Friday night in its regular season finale and a game in which the out come had a major impact on the postseason outlook.

The Vikings failed to get any momentum going offensively as the Warriors ran away with the game, 44-12.

Rockford wasted no time in making the first move, taking a screen pass 49 yards for a score on the third play of the game. The ensuing two-point try was converted and Rockford led 8-0. 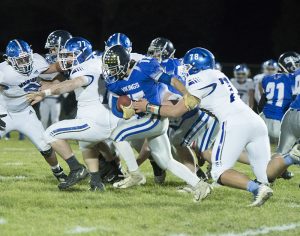 The Vikings took control of the ball and after a quick three plays, were forced to put the ball back to the Warriors. The Vikings defense held strong on the next possession, however, forcing the Warriors to turn the ball over on downs.

The Warriors tried to keep their momentum rolling by attempting and recovering an onside kick. However, the Vikings forced another turnover on downs before the end of the first quarter.

Northwood-Kensett struggled to move the ball through the rest of the half, picking up minimal first downs. Rockford, however, found the endzone twice more before the half and led 30-0 at the break.

The Vikings came out in the second half with new energy and started to move the ball. However,  a lost fumble on their first drive stopped any momentum. The Vikings forced a fumble of their own on the next drive and used it to their advantage, when junior Brandon Varner got into the endzone on a one-yard run.

Trailing 30-6 to start the final quarter, the Vikings were too far out to make their comeback. The Warriors went on to score on their next drive, widening the gap to 32 points.

Senior Caden Schrage scored on a 21-yard touchdown run, but it was too late.

Rockford added one more score before the game was over.

The Vikings will wait to find out their playoff status, but Friday’s loss casts a large shadow of doubt on their hopes.

The loss brings the Vikings to 6-3 on the season as they await to learn their playoff fates.