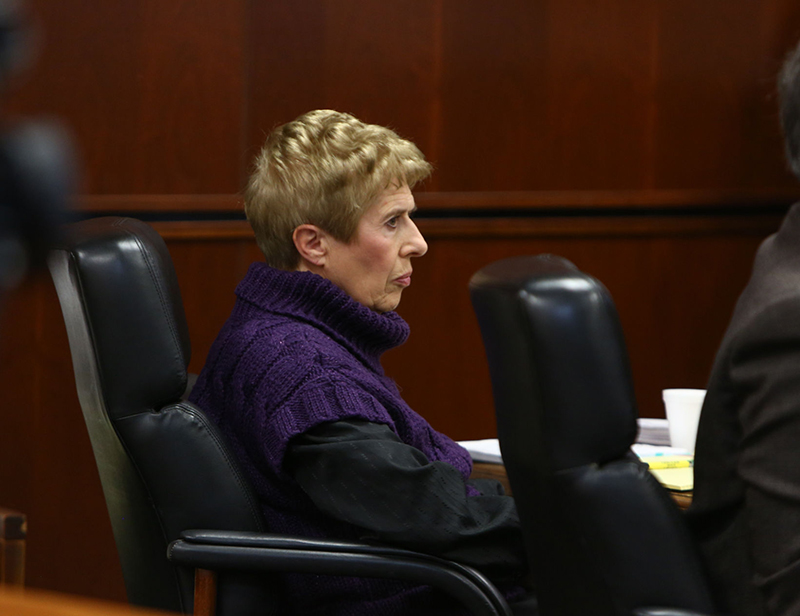 Barbara Kavars of Manly, Iowa, listens to testimony at her trial in Worth County on Tuesday. Kavars is charged with 14 counts of misdemeanor animal neglect. - Lisa Grouette/Globe Gazette

Jurors in the animal neglect trial of Barbara Kavars, the owner of a Manly puppy breeding facility, were shown photos of filthy living conditions in the kennels Wednesday, as well as pictures of 14 of the dogs seized from the premises last year.

All the dogs were very thin or emaciated from lack of food, and a few were dehydrated, according Elizabeth Pearlman, a forensic veterinarian with the American Society for the Prevention of Cruelty to Animals, who testified on behalf of the state.

Some of the dogs were obviously in pain, according to Pearlman.

One of them had to be euthanized because he could not lead “a happy and healthy life,” she said.

The dog’s tail was mostly gone, and the infection had spread to his lower back so the remainder of his tail couldn’t be amputated, according to Pearlman.

It takes two to four weeks to develop the kind of bone infection the dog had, she said.

“This did not happen overnight,” she said.

The dog also had a pressure sore on the hip that was bleeding, according to Pearlman.

She testified there was no indication the dog had received treatment from a veterinarian until a group of animal welfare professionals and a Worth County deputy arrived at Kavars’ Samoyed breeding facility on Nov. 12, 2018.

Around 150 dogs and a few cats were taken from the property during that visit.

Kavars, 66, is being tried on 14 counts of misdemeanor animal neglect. Her trial began on Tuesday at the Worth County Courthouse in Northwood.

Kyle Felt, director of investigations with the ASPCA, testified on Wednesday morning.

He was part of the team that went to Kavars’ breeding facility to document conditions there on Nov. 12.

The facilities were “not adequate at all,” he said.

Felt described one of the pens the dogs were kept in as “incredibly unsanitary and dirty.”

Feces was piled up one to two inches deep on the floors of some of the pens, while the lower walls were smeared with what appeared to be a combination of feces, mud and urine from the dog rubbing against them, according to Felt.

A combination of fur, cobwebs, dust and dirt was hanging from the rafters of some of the buildings, he said.

When investigators arrived that morning, they found all the food bowls were empty, according to Felt. He said Kavars told him the dogs had been fed the day before.

All the water bowls and buckets had layers of ice in them, according to Felt.

He estimated the water in the bowls had been frozen for at least 24 hours.

Heat lamps were in the kennels, but none of them were on, according to Felt.