A community celebrating the holidays 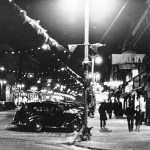 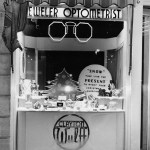 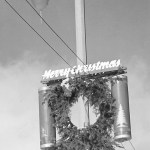 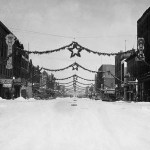 Snow enhanced the holiday atmosphere on Broadway. The decorations were made possible by contributions from local businesses in 1931. Photo courtesy Freeborn County Historical Museum 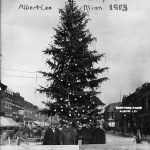 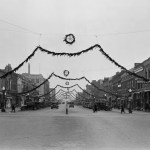 Looking south from the intersection of Broadway and Clark Street, arches of evergreen garland and lights provided a festive canopy for shoppers in 1929. Workers had transformed the business district one cold November night between 8 p.m. and 2 a.m. Photo courtesy Freeborn County Historical Museum

Members of the Albert Lea Business Men’s League organized the first community Christmas tree celebration. A 15-foot tree, placed at the intersection of Broadway and William Street, was decorated with red, yellow and green lights. On the evening of Dec. 23, 1912, a reported 5,000 people were present for the outdoor celebration.  The weather was ideal and fine for sleighing. Many people attended from throughout the county. Fireworks opened the celebration. Next was the arrival of Santa Claus in a white cutter drawn by two white horses. Excited children followed Santa to the Christmas tree, where each child received a bag of candy and an orange.

During the Christmas holiday in 1939, Albert Lea promoted itself as the City of Wreaths. The Chamber of Commerce retail division sponsored the Christmas decorations for the business district. Workers spent several days putting up garlands, streamers, wreaths and lights. Holiday banners adorned the lamp posts on Broadway. On Thanksgiving Day, the decorations were lit for the first time. The Junior Chamber of Commerce held a wreath drive during the holidays. The goal was to have a wreath in the window of every home and business in Albert Lea, to truly make it the City of Wreaths.