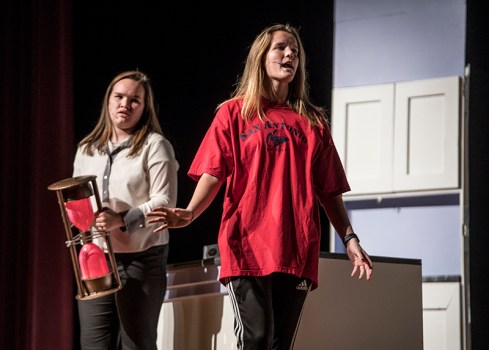 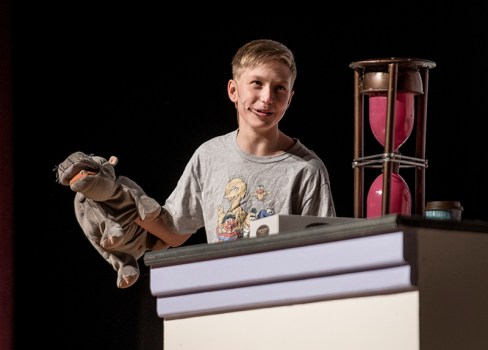 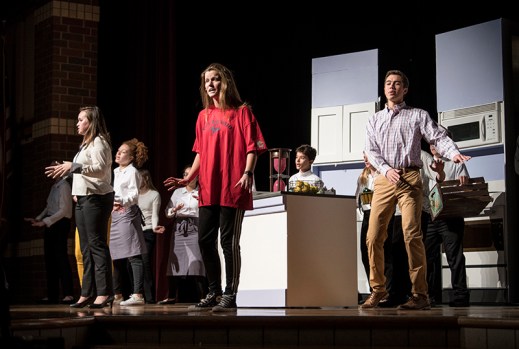 The musical uses up to 24 microphones for some of the numbers, according to director Diane Heaney. - Colleen Harrison/Albert Lea Tribune 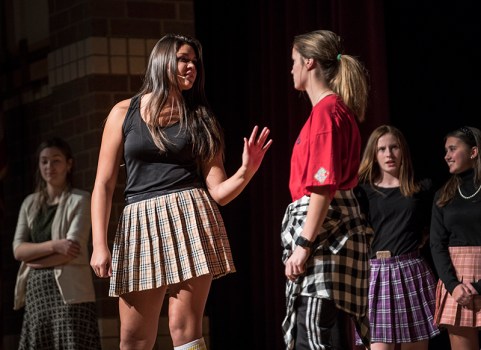 Albert Lea High School students are putting a new twist on a classic.

In “Freaky Friday: A New Musical,” the basic story is the same — a mother and her daughter magically swap bodies. The new spin on the story is that it’s set to music.

Seniors Maggie Eggum and Marissa Vogt play the lead roles in the Albert Lea musical — Eggum as Katherine Blake, an overworked mother about to get remarried, and Vogt as Ellie Blake, Katherine’s teenage daughter who
is struggling with her mother moving on from her late father.

Eggum and Vogt, in their first leading roles, said they worked together to figure out how to play their parts, and how to play them swapped. While the production is fairly new, both Eggum and Vogt said that the show is a chance for them to make some more memories during their last year of high school.

“It’s gotten a lot easier, but it was hard at first,” Eggum said of the different layers to their characters.

“Each character has their own personality,” Vogt added.

Director Diane Heaney said the musical itself is multifaceted as well. It’s funny and has upbeat music — using up to 24 microphones for some of the musical numbers, but also has touching moments that she said a lot of people should be able to relate to.

Heaney — who thinks “Freaky Friday” is likely her 25th production she has worked on at the high school — said the musical is fairly new, meaning most schools haven’t performed it yet, so the audience is seeing a unique show.

“They’ll be entertained,” Heaney said about audience members. “They may even cry a little bit.”

“It’s nonstop movement,” Eggum said. “It keeps you on your toes.”

The musical will be performed at 7 p.m. Thursday, Friday and Saturday in the high school auditorium.

What: “Freaky Friday: A New Musical”

How much: $7 for adults or $5 for students and seniors; reserved seating can be purchased at the high school office, or general admission is available at the door