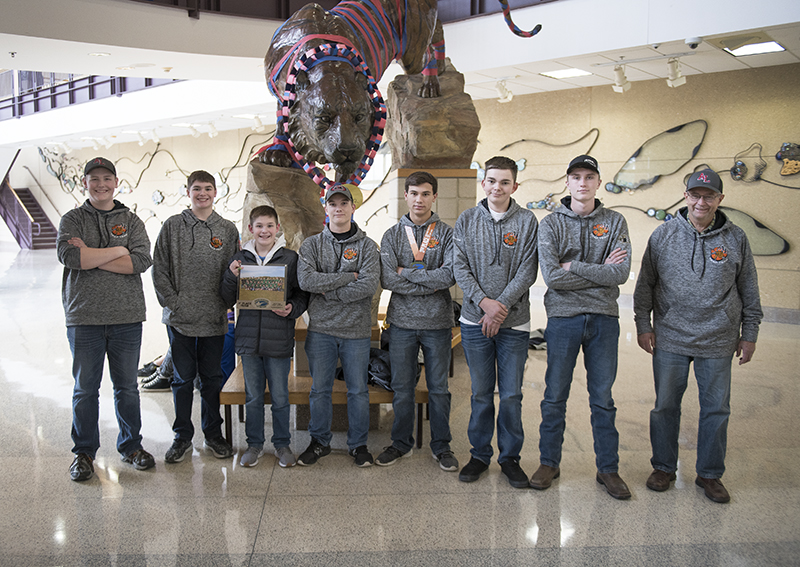 Tigers cruise to the conference championship

During its inaugural fall season, the Albert Lea trap team set three goals: to be safe, to learn about their firearms and to have fun. However, three weeks into the season, the Tigers found themselves in first place and cruised to a conference championship.

The team’s performance at meets was not even on the minds of many of its shooters, and the success came as a surprise to many of the participants and even the coaches.

“The success came as a shock to me,” said coach Gary Lerud. “I would say midway through the fall season is when I started to see it happen. I thought ‘Woah, we must have done something right.’”

Cole Estes, a junior on the team, won the third-place medal for his performance in the conference.

“It’s really been a big growing season for us,” Estes said. “It kind of surprised all of us that we started out really well. We just kept doing what we were doing and we did it really well.”

“After the first couple of weeks we were around second or third place in our conference,” Erickson said. “I could see it, but I didn’t believe it. My family can attest I was screaming when I found out. It was just the coolest feeling in the world being able to say it was our first year and we got first.”

Cody Laskowske, a freshman on the team, said a lot of work went into the team finding its success. However, like everyone else, he was surprised at how much success they got.

“It was very surprising, but we were all really happy when it happened,” Cody Laskowske said. “I think it means that we put in work and that we’ve practiced a lot and done well.”

“It was my first time ever on a trap range, never been on it in my life.” Rafdal said. “I was thinking, ‘Well, maybe this is going to be like a lot of other teams and we’re not going to be very good,’ but we saw people really excelling and people started placing first in certain meets. We really started growing and I was like, ‘Wow, this is amazing.’”

Coach Jeff Laskowske said seeing the hard work the shooters put in and watching everyone on the team bond was his favorite part about the season.

“We had everyone from seventh grade to seniors on the team, and they all get along like they’re in the same grade,” Jeff Laskoswske said. “They knew it was a team effort and that’s what made this group special. This wasn’t three or four of the kids that shot really well all the time. They all shot really well and pulled each other up. This was a 100% team effort.