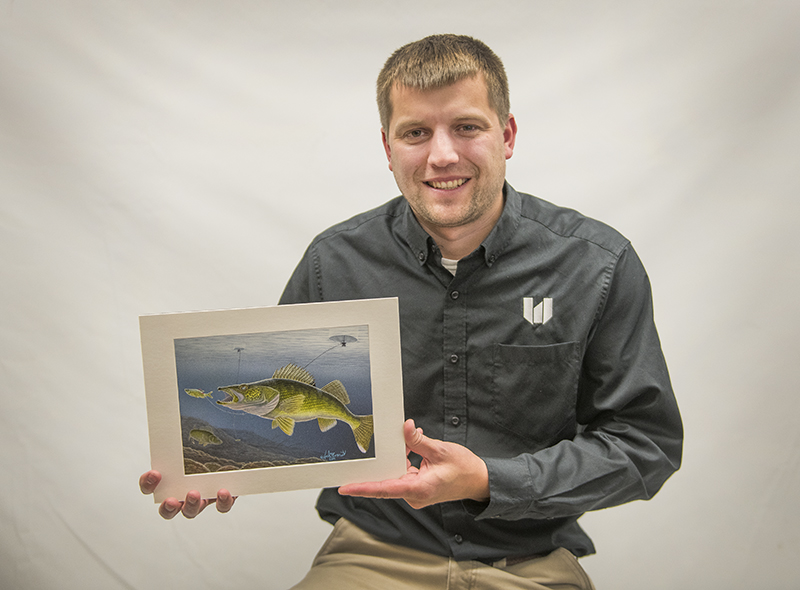 Josh Evan has always loved the outdoors, and he has loved painting for almost as long.

Evan’s mother signed him and his brother, Brandon, up for summer art classes when they were children. Starting with oil painting before getting into acrylic paints, from there Evan said the rest of his painting education was self-taught through research and trial and error.

An avid bowhunter who said he enjoys hunting, fishing and trapping, most of what Evan paints is inspired by what he sees in the field. He has been entering paintings in different Minnesota Department of Natural Resources stamp competitions for about five or six years.

After getting third place the past two years in the walleye stamp competition, Evan found out in September that his painting entered this year will be on the 2020 walleye stamp. He has entered paintings into the pheasant and duck stamp competitions as well, and said his pheasant painting made it to the top six semifinalist round this year. Having competed over the years, Evan said he has picked up tips from watching judging and seeing what wins each year.

“You see what it takes to win,” he said.

“Each year you get let down, it puts a fire under you to keep competing.”

As Evan won’t be able to enter the walleye stamp competition for a year after winning, he said he is going to focus on the waterfowl — duck and pheasant, and turkey and trout stamps. He said he hopes to build up his skills through the competitions so that he can someday compete in the federal duck stamp competition.

The walleye stamp can be purchased wherever DNR licenses are sold. Proceeds from the stamp go toward walleye conservation. According to the DNR website, the organization stocks walleye in about 1,000 lakes that cover roughly 1 million acres, and the effort costs more than $3 million per year. The purchase of a walleye stamp supports the purchase of fish from certified private providers. With Minnesota having about 2 million acres of walleye-populated water, of which about one-half have strong self-sustaining walleye populations, stocking walleye improves fishing where natural reproduction doesn’t occur as much, according to the DNR.

For Evan, the conservation efforts funded by sales of the stamp will help maintain the environment he enjoys being a part of. His competition-winning painting is of a walleye Evan caught while ice fishing using tip-ups. He said he took multiple photographs of the fish after catching it to use for reference in his painting. 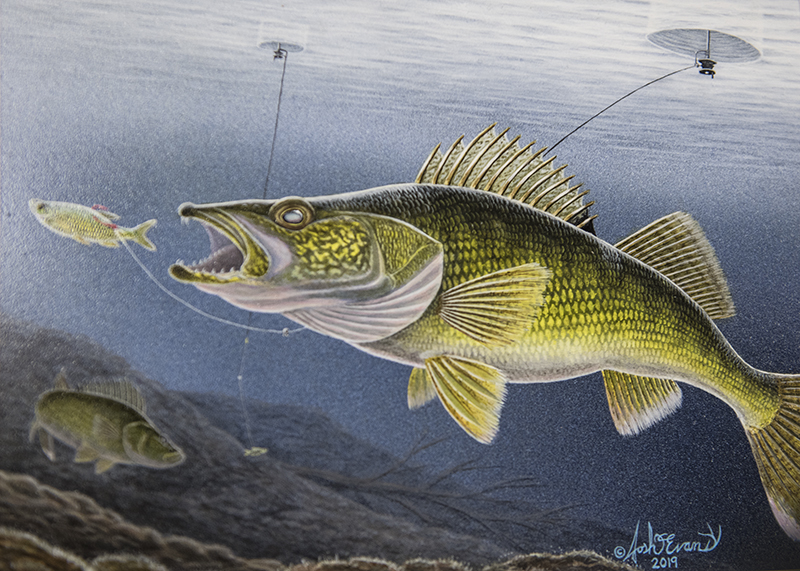 The stamp can be purchased wherever DNR licenses are sold. Proceeds from the stamp will go toward maintaining and restocking walleye in Minnesota. – Colleen Harrison/Albert Lea Tribune

Evan started the painting this year, and said it took him about 75 hours to complete, most of which was done after work during the week. He first starts with hand-sketching what he plans to paint, and then the painting evolves from there. He sometimes uses some airbrushing in his paintings — such as in the background of the walleye stamp painting, but otherwise uses traditional paint brushes. His brother, who competes in woodcarving contests, helped give Evan feedback on the painting throughout the process, and then went to the judging with Evan and their father.

Evan, a project manager at Wells Concrete, lives southwest of Mapleton with his wife, Chelsey, and their 6-year-old son, Westin, and 3-year-old daughter, Vivian. He enjoys fishing all over Minnesota — his favorite spot probably being Lura Lake, and has also gone fishing in South Dakota and Canada. Evan said he has already taken his son out fishing before — he caught a 22-inch walleye this year — and he plans to get his daughter out fishing when she’s older.

“They’ll be outdoors as much as I can get them,” he said.