Dick Herfindahl: Ice should be at least 4-inches-thick before going out 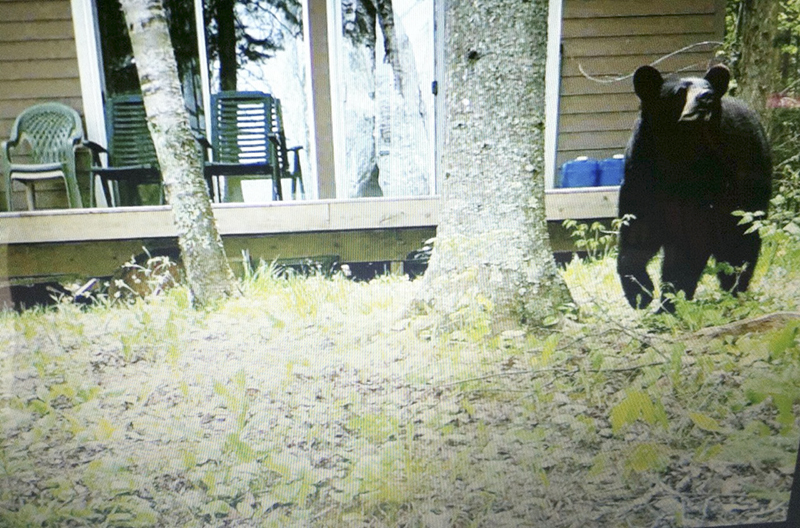 Pictured is a black bear that was captured by a trail camera as it was visiting the Herfindahl cabin in northern Minnesota. - Provided

It seems as though winter has taken away what remained of our fall. Although it is colder than normal, it is still a good time to enjoy whatever outdoor activities we can. I would encourage the fishermen out there to refrain from venturing out on the extremely thin ice that has formed on our lakes until the 4-inch safety guideline has been reached. I know even though there is ice on your favorite early season “hot spot” you must make sure that the ice is safe. I have not tasted a fish yet that is worth risking your life for.

I have heard from a reliable source when those folks were netting carp in Albert Lea Lake they actually had quite a few big walleye and northern in their nets. The game fish they net are immediately returned to the lake. My brother-in-law had talked to one of the workers who had been netting the lake for quite a few years and he said in the late fall they usually find the walleyes near the entrance to the channel. From what I have heard from my grandson Trevor and some other folks, the fishing is hard in the channel because of the large numbers of carp that have taken it over. Trevor said on his last time trying to fish the channel he couldn’t get his bait down past the many carp that were under the ice.

It would be nice to see the carp situation rectified so that we can once again see the little village of fish houses on the channel like it was just a few years ago. Knowing the fish are there, but that the carp have pretty much taken over is a hard pill to swallow. With the dredging that has taken place in Edgewater Bay over the last couple of years, there should be plenty of structure to fish there.

Although I am in no particular hurry to personally test the ice thickness on any area lake, I do like to take an occasional drive in the country, usually close to a lake, just to feel somewhat connected to nature.

Just the other day I had decided to venture out South Shore Drive just to check out the Jugland Dam area and hopefully get a glimpse of some wildlife. After I had driven past the access, I noticed an eagle emerge from the tree tops to the south and fly east above the road. This magnificent bird was soon joined by another eagle that joined the party from the north side of the road. The second eagle was smaller and what I assumed, was the larger ones’ mate. What a great sight it was to have nature entertain me with a little show that I was lucky enough to be a spectator to.

Over the years I have actually been lucky enough to witness a variety of wildlife shows, not only in our area, but also in Northern Minnesota close to my cabin. In years past, I have seen fox in the wild and also right in town. I have mentioned before that I have seen a bobcat in my neighborhood, this has happened on more than one occasion. I will usually spot deer either on my way to work at the arena or on my way home. A couple of falls ago, I was passing by the landfill and a bunch of wild turkeys were hanging out in the driveway going into the place. I was with my brother-in-law at the time and he pulled into the driveway and stopped. It wasn’t long before those turkeys walked right up to his truck and seemed to be checking it out as if they were prospective buyers.

There is indeed plenty of wildlife to observe right here in Freeborn County. Once the deer hunters have finished their season, I will likely take a drive around the county and check out some of the many WMA’s that we have right here at home.

Whenever I visit my cabin in Northern Minnesota I am always on the lookout for critters. Over the years I have spotted a badger on a couple different occasions. The first time was when I was driving down an access road leading to a lake not far from my cabin. This badger was not in any particular hurry as it crossed the road just a few yards ahead of me. The other badger sighting took place when my wife was sitting on the deck at our cabin and called to me asking what this animal was that had just came out from under our deck. I soon discovered that it was a badger which was casually walking down the trail that leads through the woods to the neighbors. Those badgers both seemed to have a swagger about them that seems to send a message that nothing was going to mess with them. That was pretty cool, but the bear that visited our cabin one spring was probably the highlight of my wildlife watching. I first noticed it out by the bird feeders and had to yell at it a couple of times to keep it from destroying the feeder. My wife and I watched it as it was checking everything out, this is when she said “it would be kind of cool if it came up on the deck” and the next thing we knew there it was. It walked around on the deck, stood up on its hind legs and looked in the deck doors. After it had satisfied its curiosity it left the deck and once again focused on the feeders.

I finally persuaded the bear to leave, but not without it being stubborn. I decided to take my hand gun and fire a couple of shots into the wood pile which got its attention but put absolutely no fear in it. After I fired a couple more shots it disappeared down the hill only to appear about fifteen minutes later after making a big circle. While it was gone I took the feeders inside and when it came back it discovered that the food it was eyeing was no longer available so it eventually wandered off.

These are just some of the fun encounters that we have had with wildlife at the cabin.

Please remember to keep our service men and women in your thoughts and prayers. Without them we would not be able to enjoy the freedoms we enjoy today. When you show respect for our flag you are also honoring them.