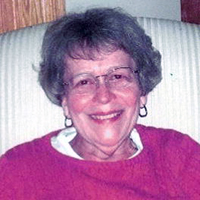 Lainy was born Nov. 18, 1938, in Mason City. Her parents Blanche and Earl Hunt moved to Albert Lea, where she grew up with her siblings Dorthy, Howard and Linda. Lainy attended Albert Lea High School. She played French horn in the band, was a cheerleader and a member of the Homecoming royalty.

She married her high school sweetheart and had three children, Robert (Peggy and Eli) Wangen, Jayne (Ian) Dock and John (Chara, Beckler and Gracie) Wangen. The family moved to Oregon. Lainy returned to Rochester with her children four years later, where she turned her positivity and love of people into a 25-year career at Mayo Clinic. She worked on the 19th floor as a receptionist and then moved to referring physicians, making friends and having a positive impact on many lives.

She married the love of her life, Joseph G. Kriss, in 1985 and added her bonus family, including Alex and Susan (Jonathan and Barbara) Kriss.

Joe and Lainy traveled frequently and had a deep love that lasted beyond his passing in 2011. She then moved from Byron to Arbor Terrace in Rochester, where she made new friends. Lainy had many artistic talents — card making, gardening, music, decorating her home and making all things beautiful. As God makes everything beautiful in its time (Ecc 3:11) Her genuine love for and interest in others, kindness, sincerity, sense of humor and smile will be dearly missed.

A celebration of life service will take place at 11 a.m. June 20 at Byron United Methodist Church in Byron. Visitation will begin at 10 a.m. June 20. The Rev. Beth Perez will officiate.

Rolls of wire taken from job site and other reports