Gerald Cleon Flugum entered into the arms of his Lord and Savior at 2:05 p.m. Tuesday, Nov. 12, 2019, at Abbott Northwestern Hospital in Minneapolis. Memorial services will be at 11 a.m. Saturday at United Methodist Church in Ellendale. The Rev. Randy Cirksena Jr. will officiate.  Burial with full military honors will be at Geneva Cemetery in Geneva. Visitation will be one hour prior to the service. 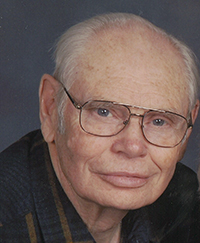 Gerry was born Aug. 31, 1928, in Albert Lea. He grew up on the family farm south of Albert Lea, learning how to care for the animals and all the wonderful joys of hunting, fishing and working alongside his brother and sisters and his best friend, Merle. He was very proud of his Norwegian heritage and the wonderful treats his mother would create on her flat-top wood stove.

Gerry graduated from Albert Lea High School and joined the Army National Guard. He went to work for his uncle, Oscar Flugum, and learned the craft of building houses. He loved working with wood and became a real craftsman. He helped build a house for the Fergusons and there met their daughter, Mildred.

When the Korean War broke out, he was stationed at Fort Rucker in Alabama, where he attained the rank of sergeant first class. When his enlistment was up, he came home and asked Millie to marry him. She said yes, and he didn’t go back to the Army.

Gerry and Millie were united in marriage May 2, 1952, at Ellendale Methodist Church. They built their life together in several locations before settling down on a farm east of Ellendale, where they lived until 1972. Gerry loved his Jersey cows. During these years, Gerry worked construction and helped build many of the bridges along Interstate 35 in southern Minnesota. He built a home in Ellendale for Millie and moved their family there in 1972. He continued to work construction and worked in insurance adjustments and inspections until his health didn’t allow him to continue. He also helped build a home for each of his children. He believed in building homes, not just houses.

Gerry loved music and was known for his whistle. If you heard him whistling a tune, he would be deep in thought while measuring and creating. He sang tenor in the church choir for many years and often sang duets with his wife, Millie. He was also an avid reader. He spent many hours reading anything Western.