Klobuchar goes after Trump and Buttigieg in Atlanta debate 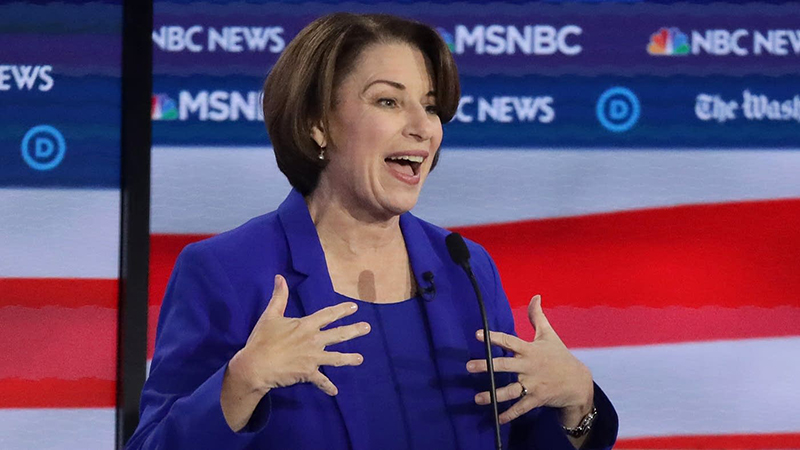 The House impeachment inquiry was the big story going into Wednesday’s Democratic presidential debate in Atlanta and several candidates, including U.S. Sen. Amy Klobuchar, used the moment to train their fire on President Trump.

Klobuchar said Trump’s conduct is impeachable, but that she’ll consider each article separately if the Senate holds a trial. She also said the inquiry is bigger than Trump.

“This is a president that not only with regard to his conduct with Ukraine but every step of the way puts his own private interests, his own partisan interests, his own political interest  in front of our country’s interest and this is wrong,” said Klobuchar. “This is a pattern with this man and it goes to everything from how he has betrays our farmers and our workers to what he has done with foreign affairs.”

Klobuchar later defended her recent comment that South Bend Indiana Mayor Pete Buttigieg, who logged a commanding lead in the latest Iowa poll, would not be where he is now if he were a woman.

“I think that Pete is qualified to be up on this stage and I am honored to be standing next to  him,” said Klobuchar. “But, what I said was true. Women are held to a higher standard, otherwise we could play a game called name your favorite woman president which we cannot do because it has all been men and really all vice presidents being men. And I think any working woman out there, any woman that’s at home knows exactly what I mean. We have to work harder and that’s a fact.”

Klobuchar went on to promote her work in the Senate and her ability to attract voter support across party lines.

“Just like I have won statewide and Mayor, I have all of the appreciate for your good work as a local official and you did not when you tried, I also have actually done this work. I think experience should matter,” said Klobuchar.

Buttigieg, who served in the military before becoming mayor, fired back saying “Washington experience is not the only experience that matters.”

Klobuchar has cleared the qualifications hurdle for the next Democratic debate. It is scheduled for the week before Christmas in Los Angeles.