Man arrested after leading authorities on chase in stolen pickup

Freeborn County Sheriff’s Office deputies arrested a man Sunday afternoon who allegedly led authorities on a chase in a stolen pickup through an Albert Lea neighborhood. 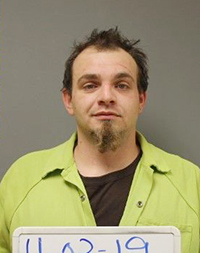 Brandon Jeffrey Wertish, 30, was arrested on charges of fleeing a police officer in a motor vehicle, fleeing police by means other than a vehicle, reckless driving, displaying a stolen license plate, theft or possession of a stolen motor vehicle and theft of a license plate. He was listed as being homeless, according to the Sheriff’s Office.

Wertish was reportedly driving a white Ford pickup stolen from Lake Mills with license plates and a topper that were stolen from Kiester.

The Sheriff’s Office stated the truck had reportedly been involved in a gas drive-off at 8:09 a.m. Sunday at the Gopher Stop in Clarks Grove. The driver left without paying for $81.42 in gas.

While on patrol at about 1:35 p.m. Sunday, a deputy reportedly saw a pickup with the same description as the one involved in the drive-off on the 1400 block of Crestview Road.

Wertish reportedly sped away at a high rate of speed, and the deputy pursued the pickup with lights and sirens for approximately 10 blocks through the neighborhood. The truck stopped after striking a tree in a culdesac on Eastgate Road and going down an embankment.

According to the Sheriff’s Office, Wertish and his passenger, Shuntel Marie Stephens, 38, of Walters, fled on foot.

The Sheriff’s Office utilized its drone and K-9 to look for the two people without any immediate success.

At about 2:40 p.m., authorities were notified that a man was in the grass near a property on Tiger Ridge Road. They deployed the drone again and found Wertish in some grass nearby. He was taken into custody shortly after and was taken to Mayo Clinic Health System in Albert Lea, where he was treated for hypothermia and possible injuries.

A Minnesota Department of Natural Resources officer found Stephens, who was also taken to the hospital and later released without charges.